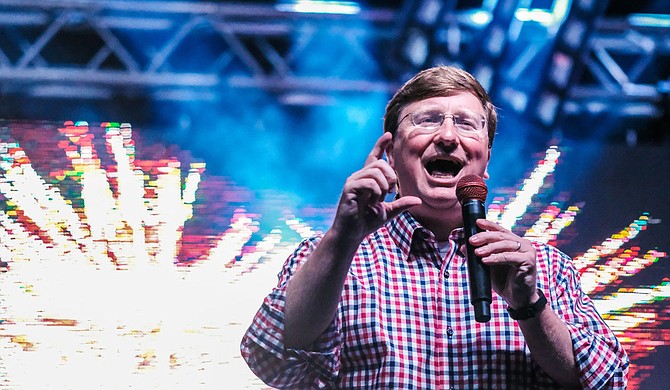 Gov. Tate Reeves tweeted that “there is no such thing as a ‘nonessential’ Mississippian.” Donna Ladd lists many ways he communicates the opposite. Photo by Ashton Pittman

"There is no such thing as a 'nonessential' Mississippian."

When I saw Gov. Tate Reeves' tweet that on April 23, I stared at my screen. As a native Mississippian, I know that our top leaders don't feel that way about every Mississippi resident. Their own actions, or lack of them, speak volumes.

Reeves was making this inclusive proclamation to prep Mississippians for his rollback of his belated shelter-in-place order to allow more "non-essential" Mississippi businesses to re-open. Supposedly, re-opening is to help the economy, which is in free-fall, and keep people off unemployment benefits that the State of Mississippi and feds can't figure out how to consistently and promptly provide anyway. It will also function as a way for employers to fire employees afraid to come back into the workplace, such as big non-essential retail outlets, and deny them benefits.

The governor who went to Spain on vacay in the middle of a world pandemic is confident, he tells us, that cases in Mississippi have reached a plateau, meaning we can start getting out and spending again. Certainly it is a high-plains plateau with 238 cases announced as I sit on my porch writing and listening to the roar of helicopters headed to the University of Mississippi Medical Center.

But I'm quite sure Reeves is more worried about brown-nosing Donald Trump's wish that this whole pesky coronavirus was behind him—so far, to Reeves, Trump can do no wrong—but that wasn't why Reeves' tweet gave me such pause.

I froze to try to conjure any other instance where Reeves' actions telegraphed that he feels that way about all Mississippians, regardless of political beliefs, where they were born, race, socioeconomic status, health, who they love, criminal record or how they worship.

I can't think of one example, either by Reeves or his predecessor Phil Bryant, that gives credence to his tweet. But I know of many times Reeves, as lieutenant governor and now as governor, has indicated the opposite. Here's a list:

His belief that teachers in well-performing, affluent schools should be financially rewarded, while pulling funds away from poor schools with essential young Mississippians who need it most.

His long-time support of legislation that would allow essential mothers to die on an operating table rather than get an abortion to save their lives and ensure their other children still have a mother. Likewise, wanting  essential little girls to give birth to the child of a grown man, or even a relative, rather than having an abortion.

His refusal to do anything meaningful to help lower the mortality rate for essential infants or essential mothers who often die in childbirth in Mississippi.

His determination to redirect taxpayer funds from public schools educating essential children into private schools that don't need nor should have legal access to public funding.

His refusal to support common-sense gun laws to keep more essential Mississippians, including the mentally ill, alive long enough to get help.

His apparent contempt for essential low-income Mississippians who need public assistance to keep from allowing their essential families to starve and to bridge gaps as they get back on their feet.

Now, in the time of the COVID-19 crisis, Reeves proclaiming he sees all Mississippians as essential strains credulity even more. If we're all so damn essential, why did the governor take so long to declare his April 1 shelter-in-place order in the first place? Why did his first distancing order include an exhaustive list of "essential businesses" that went even beyond what the White House wanted? Why did he include confusing legal loopholes on social distancing for shopping centers, department stores and "offices"? Why were car dealers declared essential? Churches? Gun stores?

Reeves' apparent lack of interest in the potential explosion of COVID-19 cases behind bars—in prisons among convicted people and in jails among people who can't afford bail or get a trial for months or years—shows no compassion for Mississippians who make mistakes, even if they haven't committed a violent crime or even been tried for one.

The governor's refusal to name nursing homes that are key COVID-19 hotspots shows a disregard for the essential neighbors of those places, stifling the ability of communities to watchdog how the State is handling those situations. During a pandemic, good information is more important than ever to help make sure politics isn't trumping safety.

And, of course, Reeves megaphoned as loudly as possible on April 3 that he is little concerned about the 38% of essential Mississippians who are bearing the burden in COVID-19 illness and deaths. The Jackson Free Press broke the news that Reeves actually proclaimed Confederate Heritage Month as many essential members of black churches and communities were stricken with COVID-19, often far from needed medical assistance. When reporter Nick Judin asked Reeves later what he would say to black Mississippians upset by the proclamation, he just mumbled about a statute requiring it. That's false.

Of course, essential black Mississippians bear the burden for this disease precisely due to the reasons I listed above, as symbolized by the Confederate emblem in our flag and those who defiantly insist our taxpayers still pay for it to be an official reminder of a horrific war to keep white supremacy in place, and maintain and extend slavey to new states.

Reeves is doing nothing to actually alleviate the racism—structural, systemic, institutional, interpersonal—that causes white people to pack out their resources when too many essential black people start gathering around them, leaving broken systems, neighborhoods, schools and no respect for all essential human beings left behind. He, like too many Mississippi leaders, instead panders to the white Mississippians who cling to that war and its leaders as if it was a glorious past and point of pride. It wasn't. And I say that as a descendant of both slave owners and Confederate soldiers.

Reeves has said far more about the First Amendment rights of Reopen Mississippi dead-enders—while peppering in blame-China political talking points—than he has bothered to say to the roughly 1 million black Mississippians whose blood, sweat and toil are the backbone of this state and its ability to do business and keep his friends rich.

Reeves could and should start showing he actually cares for them, and all poor Mississippians, with one essential action: expand Medicaid. He should forget partisanship and listen to his recent Republican opponent Bill Waller Jr., the son of a former governor, and former Gov. Ray Mabus' blunt call to expand Medicaid in this newspaper a week ago. He should stop failing Mississippians and help people get and stay well so they can work and thrive and help actually rebuild our economy into something more than a spoils system for the wealthy.

That, Gov. Reeves, is essential. Anything less during this pandemic is mean and cruel.

Donna Ladd is editor-in-chief of the Jackson Free Press. Email her at [email protected] and follow her on Twitter at @donnerkay. See her blog at donnaladd.com.