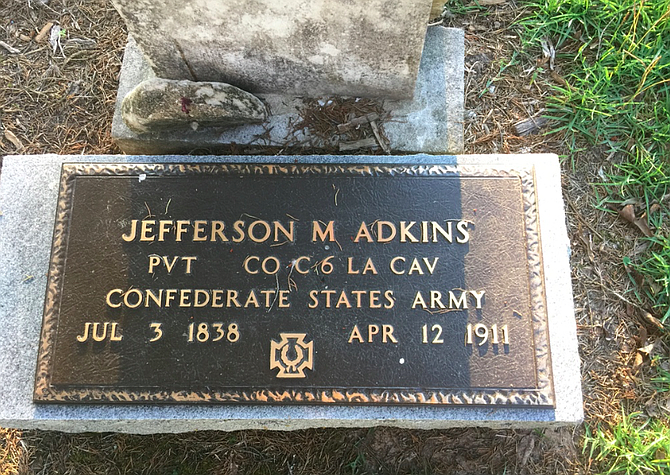 Jeff Adkins was Donna Ladd's great-great grandfather. He lost his entire first family to disease during the Civil War, and then returned. She descends from him and his second wife and family. Photo by Donna Ladd

Look, I get it on a visceral level and somewhere deep in my Confederate-descendant bones: Mississippi was eviscerated and nearly leveled in the Civil War. Eighty percent of casualties in our state were from diseases that spread through soldiers from the North and the South, and many Mississippians died from untreated diseases and even starvation once the North cut off the supply routes, blew up the railroads, and torched crops and homes.

By the time Union troops took Mississippi, the conditions here were deplorable: "We were hungry and just barely alive," as The Band sang in "The Night They Drove Old Dixie Down." And we know Union generals burned Jackson multiple times.

My great-great grandfather Jefferson Adkins enlisted in the Co.D Yankee Hunters, 36th Mississippi infantry, to fight for the Confederate cause, I'm told. His first wife, Cynthia, and their six children were struck in an influenza epidemic. After the Battle of Shiloh, he deserted because he learned they were ill, as so many people in Mississippi were in the abysmal conditions here. He arrived home and found they had all died.

Granddaddy Jeff, the story goes, then moved to Louisiana and re-enlisted into the 6th Louisiana Calvary, fought to the end of the war and married my great-great grandmother Fannie there. They then had 12 children including my great-grandma, Becky Ladd, whom I knew. (She was old by then.)

He survived the war, but the South suffered a resounding defeat. Most southerners lost everything they had, including many loved ones, and they lost the tool that had made Mississippi what was arguably the richest state in the country before the war.

I can't know how my great-great grandfather felt about black people, although there was plenty of racism passed down, at least through my generation. I still don't know if he or his ancestors had owned slaves—I'm still working on that—but I do know that other direct ancestors did. I don't, nor can I, know what was in his heart when he enlisted to hunt down and kill Yankees.

What I do know is that the South fought the Civil War for very bad reasons. Mississippi was the second state to secede, egged on by then-Gov. John J. Pettus, and our leaders made it crystal-clear why our state left the union and joined the new Confederacy that stole federal property at Fort Sumter, near Charleston, S.C., to kick off the war.

"Our position is thoroughly identified with the institution of slavery—the greatest material interest of the world. Its labor supplies the product, which constitutes by far the largest and most important portions of commerce of the earth," Mississippi wrote in its Declaration of Secession.

The "material interest" was black slaves, who out-numbered whites in Mississippi in the 1860s. When I hear people defend the Confederacy as a fight for our "heritage," I want to remind them that our state had only existed 44 years when Rebels attacked Fort Sumter. Our "heritage" and the "product" was cotton and the wealth it created for planters: both the people who had great amounts of it and those who wanted to lift themselves up to slave-owning planter status. Our pre-Civil War economy was built on the cotton crop, and its profits depended on free labor. Of course southerners were freaked out about losing slaves; the economy was built on those people's backs.

An MPB documentary I watched this week, "Mississippi War: Slavery and Secession," brings home the point that most Mississippians then didn't even grow their own food; they were largely focused on growing and then exporting cotton, much as my Virginia ancestors 200 years before had been tobacco exporters. This fact was part of the reason so many people fell hungry here in the Civil War once the Union took Corinth and New Orleans and blocked imports.

In many ways, our state was the ultimate "gold-rush" destination of the early 1800s. Many of our people flocked from states like Virginia and the Carolinas to a lush place with tropical growing climates and a big river to draw from. Many of them brought slaves with them (some of my ancestors did); others couldn't yet afford slaves but hoped to. Many families owned one or two slaves. In Mississippi at the start of the war, 49 percent of families owned enslaved people.

But regardless of whether any of your ancestors owned slaves, the "way of life" Confederates fought for depended on it. "Everybody benefitted," one of the historians in the MPB documentary conceded, meaning all the white people.

The irony of our secession was that President Lincoln, who hadn't exactly started out as an abolitionist, had offered to reimburse slave owners if they would give up slaves. But here it wasn't just about the labor, as our Declaration of Secession and countless writings and speeches by Confederate leaders prove, it was about the habit of feeling superior to people of a different race: the "way of life." Southerners only knew an existence that included slavery and white supremacy; they would fight to keep it in place and to have a federal government that would force new states to be pro-slavery and to send runaway slaves back to the states they had fled—part of the Confederate platform.

It was ugly stuff, and it's hard to get more tragic. It breaks my heart now in multiple ways to think that my own people were part of that system and would fight to the death to keep it in place.

But they were. And I can't change that. At the same time, I can feel the pain and hunger and anguish of losing everything based on a lie you'd been raised to believe. I think of my great-great grandfather burying his wife and six kids, and I can hear the sad bells The Band recalls in that song.

I don't need to romanticize that war, or its symbols, and it doesn't change my pride in Mississippi now because we've bounced between the extremes so far in our history. We were the richest, then we were the poorest because the immigrants here we descend from didn't want to give up the curse that made many of them incredibly wealthy for a little while.

Here's the thing: None of it was ours in the first place. We took the land, and we made money off of it with enslaved people. There is not pride in that heritage. We cheated, and we lost. It was inevitable, if ugly.

Where there is pride, though, is in overcoming it. Just in my lifetime, I've seen remarkable progress in this state, especially considering where it started. My own life, and my business here, my staff and my family all prove it in their own ways. We've come such a distance, but we're still chained to the romantic, inherited vision of the Dixie ideal too many still hold onto.

Such a grasp of the past doesn't serve any of us. It is long past time to declare independence from a "lost cause" that wasn't worth fighting for and from those who insist on keeping us stuck there. Mississippi now is better than our past, and our people and the world around us deserve to know that.

It is high time that we ring those bells loudly and finish driving old Dixie down.

Stolen Lives: Remembering the Tragedy of Slavery in Mississippi

In 1860, 49% of White Families in Mississippi Owned Slaves, Who Were 55% of the Population

How many Confederate soldiers owned slaves?

Slaves and major slaveholders in Hinds County in 1860

Slaves and major slaveholders in Madison County in 1860