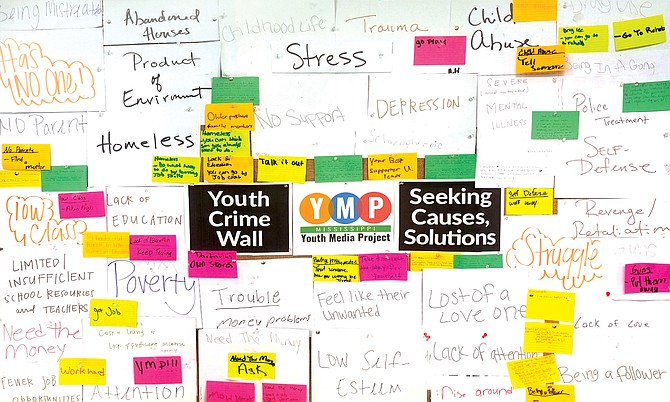 The question was simple: "Is youth violence the fault of the family or the young person?" The Wingfield High School teacher meant well when she posed that question symbolizing so much of what is wrong in the accusatory public narrative about young people caught in often-generational cycles of trauma and violence.

She was sitting with about a dozen teenagers in the Mississippi Youth Media Project newsroom, next door to this newspaper's office downtown. The students were from the soon-defunct FAME program for young people who had school attendance issues, many of them I'd learn also suffering severe trauma from both experiencing and witnessing violence, which they seldom-if-ever had talked about. They came to YMP every Friday to learn media skills and tell their stories.

The educator was thrilled as she told the room how the group had devoured my "Hunger to Live" story about young men facing hunger and violence in the Washington Addition. They wouldn't stop reading it, she said, beaming, and they enthusiastically circled the embedded causes and solutions for youth violence, as I had asked them to do as homework.

So she had assigned a writing prompt: Is crime the fault of the young person or the family?

I bit my lip, not wanting to dampen her enthusiasm while noting to myself that her question left the often-blamed public schools out of the mix. "Well," I said, "I prefer more open-ended writing prompts rather than yes-or-no or either-or questions. So let's do another free write!"

My new prompt was "young people commit crime because ...." They started quietly scratching words into their journals.

The teenagers soon read out loud dozens of reasons for youth crime. They know exactly why young people commit violence, and each of them wants it to stop, but didn't know how or believe that it is possible. They taught me through their eyes.

I then had the students do a down-and-dirty systems analysis like one we did when I was a W.K. Kellogg fellow. The FAME students put each cause on a sheet of paper on the big floor—a map of what research, indeed, also shows: police brutality, poverty, stress, struggle, "no parents," self-defense, trauma, going hungry, no opportunity, hopelessness, peer pressure, underfunded schools, "need money," and others.

They then brainstormed potential solutions for what became our traveling "crime wall" for youth-crime dialogues. Their work would inspire later YMP classes to follow their work and document it in a short documentary on youth violence in Jackson accepted into the Crossroads Film Festival)

The Trauma, Hold of Generational Violence

Among the FAME teenagers was a brilliant young man who was constantly on edge who told me he had watched his 11-year-old cousin shot next to him.

There was a young woman who had been sexually abused by a mom's boyfriend and later beaten by a police officer and stabbed by her mom the same night.

Another gregarious boy came up in a gang family and craved a different path, and he got himself to the Youth Mayoral Forum that YMP hosted at Provine High School to help move tables around because, by damn, he was going to be there to help.

I loved these young people, with all their wit, honesty and imperfections (like all of us), and they taught me more than all of the violence research I've studied—especially how too many of our young people grow up in cycles they have no idea how to escape. They taught me that they and their friends love and will devour journalism that is honest about their challenges. "Finally, something positive," they say about stories like those in the JFP's "Preventing Violence" solutions series.

They are marginalized, stereotyped and lectured by everyone in sight, but rarely listened to. They're just supposed to "know better," just like their parents should've, as the people wagging fingers and calling for more jail beds say.

These cycles started back with race violence—systematic horrifying lynchings in most if not all Mississippi counties over decades and white mob violence against Black people, especially young men, to keep them in their place. The violence, powerful white people believed, would keep Black people not voting, not engaged in the civic discourse and decision-making, no access to resources, education, power and opportunity that it takes to reverse such centuries-old systems. Those long-dead racists still win when we're told that the answers are harsher policing and renting more jail beds for low-level offenders, who actually need opportunity instead.

You don't destroy hope and safety of generations of young people with threats of being burned at a stake for flirting, with the state's largest newspaper announcing it in advance to swell the crowds, without the trauma of that violence sinking in generationally until we as a society pivot together to stop it.

That is science, folks.

I know that violence research, no matter how on-target it is, can't change the fear in Jackson of the violence that has continually spiked in the capital city since U.S. Attorney Mike Hurst started Project Eject, working with the city and county) in Jackson in late 2017. (Based on rresearch about this kind of "sweeps" policing causing more crime and violence, I don't believe that is a coincidence.)

As I'm writing this, the Jackson City Council plans to meet at New Horizon Church in South Jackson later today (Tuesday, May 4) to, supposedly, focus on the violence.

Inevitably, some will pound the desk for more police and jail beds. I remember a panel discussion Councilman Banks hosted at Forest Hill High School around the time that the Wingfield teens did the systems analysis and not long before murders started spiking (coinciding with the anti-evidence-based Project Eject's focus on mass incarceration of more Jacksonians) and so-called gang enforcement, which also continues the cycle of violence inside and outside prisons.

A row of uniformed officers sat at a front table in the Forest Hill cafeteria. Some commentary was thoughtful, but steeped in resignation. Few young people were there, just as those who need opportunities the most are least likely to get it.

This is difficult work, and it should've started in earnest and in an organized way a decade or decades ago, but the second best time is now.

Make no mistake: More police officers will not reduce violence (they admit that in honest moments). And when not trained or managed well, law enforcement increases violence—and studies of Jackson crime show that putting a young person in the backseat of a police car is one of the stronger indicators of whether he or she will commit worse violence later.

When officers are disrespectful or abusive to Jackson's young people, teenagers will respond in kind, and police lose trust with the community. When cops beat up, or kill, a mentally disturbed man they were called to help, they are increasing the culture of violence. Research proves that over-policing and brutality causes more violence and that spending more on police officers does not lower crime. Not to mention, violence and disrespectful law enforcement are modeling that behavior for young people

What Jackson needs is an evidence-based safety net to wrap around our neediest young people at every stage to stop cycles of violence that spread like a virus. We can unite to fill in the holes, but we must stop finger-wagging blame-games and assuming that more cops are the answer rather than one of myriad causes.

Seek real solutions, or we'll be having the same meetings in the same churches 20 years from now.

Read the JFP's award-winning and impactful archive of solutions journalism focused on causes and solutions for violence. Visit jxnpulse.com for Mississippi Youth Media Project journalism including on violence prevention and causes of youth crime. YMP is on hiatus until after the pandemic. Write [email protected] if you're interested in helping as we move toward relaunching the project.