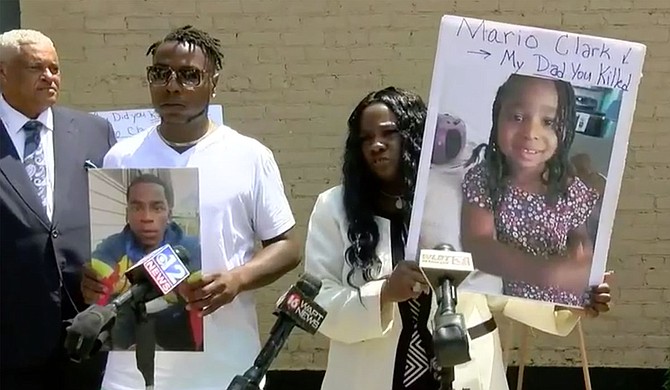 Attorney Dennis Sweet III convened four families at his office in Jackson on June 9 to speak out about police brutality. Three of four of the cases resulted in death. Photo courtesy WLBT Screencap

Four Jackson families whose loved ones were victims of local police violence, three of them fatally, spoke out yesterday, publicly calling for justice in the wake of national awareness over police brutality. Relatives of the victims stood with lawyers from Sweet and Associates at a press conference to tell their stories yesterday afternoon.

Families present included the relatives of John Knight III, 19, whom ex-JPD officer Vincent Lampkin handcuffed and punched in 2018; George Robinson, 62, who died of a subdural hematoma after a beating from three JPD officers in 2019; Mario Clark, 31, whom JPD officers beat to death in the throes of a schizophrenic episode in 2019; and Lee Bonner, a 37-year-old a JPD officer shot dead in 2018.

One by one, family members described encounters with the Jackson Police Department. They said it was not enough for the people of Jackson to march in protest of the death of George Floyd in Minnesota while ignoring how police treat the citizens of the capital city of Mississippi.

“We want the City of Jackson to come and stand up, and tell us what they’re going to do about us,” Bettersten Wade, Robinson’s sister, said. “My brother died from blunt trauma to the head. Homicide. He was brutalized.”

The families said to the press that the Jackson protests against the killing of George Floyd inspired them but left them seeking justice of their own.

"We had a march in Jackson to recognize those affected by police brutality in the country,” lawyer Dennis C. Sweet III told the media. “These are not all the cases but only the ones I represent. I know of others. I want you to hear their view and recognize the loss of their family member." He said the officers involved need to be arrested, rather than hide under the cloak of immunity.

“When there is probable cause for an arrest, we ask that an arrest be made and let the justice system take care of itself,” Sweet added.

Hinds County District Attorney Jody E. Owens in response released a statement on the criminal investigation involving the deaths of George Robinson and Mario Clark, both beaten by JPD officers early in 2019, saying that since he took over the position, “my administration has been actively investigating both cases and has been in contact with Mayor Lumumba and attorneys of the families involved. It is the policy of the Hinds County District Attorney’s Office that all evidence generated from death investigations involving police officers is presented to a Hinds County Grand Jury to determine whether criminal charges against the police officers involved is warranted.”

“(I) will make no further comments until such investigations are completed and a Hinds County Grand Jury has taken action regarding the same," he said in the statement.

Mayor Chokwe A. Lumumba, in a press statement late Tuesday, said that his administration had acted swiftly in all the cases mentioned at the press conference.

"Not only were these cases, per the DA's statement, referred to their office, but action was taken immediately to remove those officers off the street during their pending investigations," he said. "In the Mario Clark and John Knight cases, the officers were terminated immediately. In the Mario Clark case, those officers were brought back on duty by the Civil Service Commission. That decision is currently being appealed by the City."

In an interview with the Jackson Free Press, Sweet warned against the idea that removing individual officers can address what he described as institutional policies. "What you miss is that it's systematic. It happens down here in horrible ways and nothing is being done about it," Sweet said.

Sweet additionally claimed that, in the case of George Robinson, the city chose not to exhaust its legal avenues against the officers involved in the beating of George Robinson. "When you have a civil service hearing whoever loses has a right to appeal to circuit court. If you lose there you have a right to appeal to the Supreme Court. They didn't appeal the civil service hearing at all," Sweet said.

For the first year-and-a-half of his tenure, Mayor Chokwe A. Lumumba continued the Jackson Police Department’s long-time tradition of never releasing the names of police officers who shot and killed civilians. Under pressure by this newspaper, Lumumba convened a task force that eventually reversed that policy, releasing names and files to this newspaper in January 2019 about a series of officers who had killed people since he took office.