Mayor: No ID of Cops in Head Trauma Death; Other JPD Officers in Shootings Finally Revealed 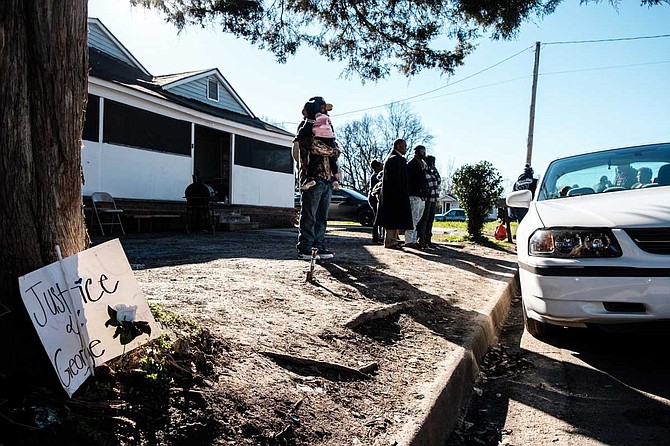 Family members held a press conference next to the car George Robinson was in when an encounter with police began on Jan. 13—the night he died. At a Jan. 24 press conference, the family demanded "justice." Photo by Ashton Pittman.

If a Jackson police officer shoots someone, his or her name may now be released to the public within 72 hours under an executive order the mayor of Jackson appears to have signed recently.

But, an officer hitting someone, potentially causing head trauma that leads to his death, is not included in that order, the mayor said in a statement Monday.

Eight days ago, Washington Addition residents started reporting that Jackson police hit George Robinson, 62, in the head, causing his death within two days and an investigation into the officers’ conduct, in addition to a potential lawsuit against the City of Jackson.

But Mayor Chokwe A. Lumumba is refusing to release the names of the officers under investigation for the encounter. His statement distinguishes between an officer-involved shooting and an officer allegedly causing a death in another way, such as a beating.

“In the time since the City opened its investigation into the circumstances surrounding Mr. Robinson’s arrest and death, I have been requested to release the names of the arresting officers per the terms of the executive order to release the names of officers involved in shootings,” Lumumba said in a statement handed out at a press briefing hosted by the Jackson Police Department earlier Monday. “Please note that because this is not an officer involved shooting, the names of the investigating officers will be withheld for now.”

Lumumba did not attend Monday's press conference, and the attendees, including Police Chief James Davis, did not take questions about the statement or related issues. The City said in a statement last week that the mayor was attending a conference in Washington, D.C., and was not available to answer questions about the Robinson matter.

The mayor said in Monday's statement that he would, instead, reconvene the officer ID task force that he established after repeated calls from this newspaper to name multiple police officers who had shot people in the time since Lumumba took office in July 2017, promising criminal-justice reform and better and more transparent policing. Lumumba announced the task force in April 2018, and it met for several contentious months with multiple delays, with the names of the officers remaining shielded from public view.

Then in October 2018, the task force recommended the national best practice for identifying officers in shootings—that they be named within 72 hours of the incident.

Lumumba’s statement Monday made it clear that his executive order, as it stands now, does not include identifying officers who kill people in ways other than shooting them, including the alleged flashlight to the head of George Robinson, who was recovering from a stroke he suffered in December when officers are accused of roughing him up and then charging him only with a misdemeanor for resisting arrest.

“I am reconvening the Officer ID Task Force to address whether we amend our Executive Order to include the revealing of officers’ names in cases of the potential use of excessive force,” Lumumba said in Monday's statement. “I am also issuing an amendment to the executive order to include the establishment of a closed review panel which will determine whether exigent circumstances, such as a credible threat, exist that would prevent the release of officers’ names.”

The ultimate recommendations from the original officer-ID task force left open several questions including what circumstances could delay the release of officers’ names after a shooting incident—a question that clearly has yet to be addressed. It also was unclear whether the Mississippi Bureau of Investigation could or would shield names in cases it took over so that an agency outside JPD could investigate officer-involved shootings.

“We will continue to honor our commitment to be forthcoming as this investigation moves forward,” Lumumba’s statement ended.

However, the process the City is following to provide transparency for deaths a Jackson police officer causes is not yet fully transparent, resulting in a negative feedback loop for those seeking more information about officer-caused deaths.

After the press briefing Monday, for instance, the Jackson Free Press asked for a copy of the executive order mentioned in Lumumba’s statement, as well as the date of the executive order Lumumba signed on officer ID to use for this story, but City spokeswoman Candice Cole responded, “Please submit a FOIA request through the City Clerk’s Office for a response to your query.”

A "FOIA" is a request for information the taxpayers own, which public servants are legally required to provide to anyone who asks for it. The City's online document-request system typically takes at least a week for a response.

As this story goes to press, neither Cole nor Chief of Staff Safiya Omari has responded to follow-up emails simply asking for the date the mayor signed the executive order.

A document release Monday, however, also marked a milestone in local police transparency when the City of Jackson provided information on previous officer-involved shootings that the Jackson Free Press has sought for more than a year, in some cases. The City provided us the names and status of 12 Jackson police officers involved in shootings, and additional information, in response to a public-records request that JFP city reporting intern Taylor Langele started pursuing two weeks ago.

The City's response to our request revealed the names of 12 officers involved in nine shootings since 2017, and under three different police chiefs since Lumumba took office 19 months ago. It showed that one officer, Precinct 4 Officer Anthony Veasey, was involved in three separate shootings, and another, Officer RaKasha Adams, was involved in two since November 2017.

Records show that JPD internal-affairs investigators exonerated Veasey in two of the shootings, including the Nov. 15, 2017, car chase of a man who sped through a police checkpoint at James Garfield Circle and Abraham Lincoln Drive. After the man crashed, he ran on foot with Veasey chasing him. Veasey said he thought he saw a gun and fired at him, hitting him in the leg. Dets. Lincoln Lampley and Desmond Barney corroborated his story, but did not give chase alongside Veasey, the internal investigation found.

Veasey is currently on administrative leave with pay along with Officer Jarron Carter for a different and presumably more recent shooting, but JPD provided no details on it, saying it is currently under investigation.

JPD exonerated RaKasha Adams for her Nov. 15, 2017, shooting of a vagrant on Mayes Street who she said pulled a gun on her. But in October, the department suspended Adams and Corporal Albert Taylor for 90 days for engaging in an active pursuit of a car for a traffic violation and then both firing into the vehicle, killing Crystalline Barnes.

City documents indicate that of the 12 officers revealed, only six are currently on active duty with pay. Dets. Warren Hull and Roy Dickerson, involved in Feb. 21, 2018, shootout with two men on Deer Park Street, were exonerated and now work in the Evidence & Property Division.

Officers Michael Tarrio and Derrick Edwards are still active in Precinct 1. After a traffic stop on Rainey Road near Cooper, records show that Tarrio scuffled with the driver, who then pulled out an assault weapon and fired at him. Documents say Edwards shot a man in the leg who pulled a gun at a traffic stop on Cooper Road near Meadow Lane on Aug. 8, 2018.

In addition, City records show that Det. Desmond Barney is working with the K-9 unit, which JPD Chief Davis also confirmed last week is the unit that stopped George Robinson while looking for suspects in the murder of Rev. Anthony Longino in the Washington Addition.

Two of the officers involved in shootings since 2017, Codey Smith and Kenneth Short, have resigned from JPD, but not due to the shooting case, the documents indicate. On Oct. 27, 2017, they fired at a shooting suspect on Lampton Street who pointed a gun at them.

In October 2018, WLBT reported that six of the above officers—Rakasha Adams, Desmond Barney, Roy Dickerson, Lincoln Lampley, Albert Taylor and Anthony Veasey—asked the Civil Service Commission to investigate why they had not been able to return to active duty since they were involved in use-of-force situations.

“They’ve been cleared by every avenue that we know of that Jackson Police Department policy requires, but they’re still not returned to duty," attorney Francis Springer, who is representing the officers through the Southern States Police Benevolence Association, said then. "The City of Jackson is short enough police officers. They need everybody they can on the street. These officers are trained. They’re veteran officers, and they need to be back on the street.”

The outcome of that request is not yet clear. The documents the City provided Monday indicated that, of those six officers, Adams and Taylor are on 90-day suspensions; and Veasey is on leave with pay for the investigation of his third officer-involved shooting in just over a year. The other three are on active duty as detailed above.

The Jackson Free Press is further examining the data provided Monday and will report more details about the officer-involved shooting cases shortly. This is a developing story.

Correction: The original version of this story said that Officers Veasey and Carter are on leave without pay during an investigation, but they are being paid.

Email information and tips to city reporting intern Taylor Langele at [email protected] and follow him on Twitter at @taylor_langele. Follow Editor-in-chief Donna Ladd at @donnerkay on Twitter. Read more about officer-related shootings in Jackson at jackfreepress.com/policeshootings.