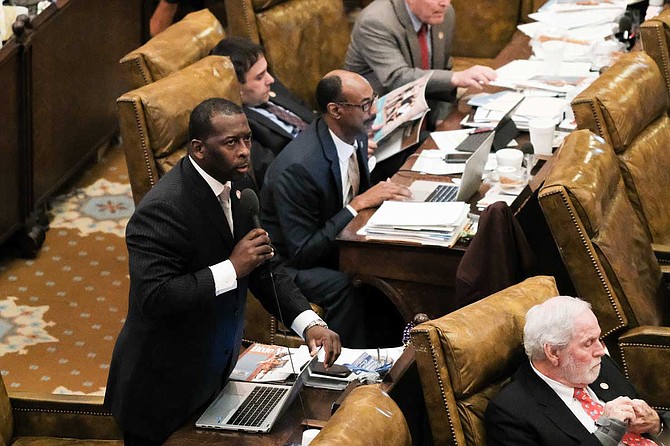 Rep. Chris Bell, D-Jackson, argued against a bill to shield the identity of police officers involved in shootings. It passed with an amendment to require the release of their names after six months, which would make Mississippi one of the least transparent in the nation on officers who shoot people. Photo by Ashton Pittman.

JACKSON — The public-transparency efforts of the City of Jackson in the last year may be for naught if legislation working through the Mississippi Legislature to protect identities of officers who shoot people becomes law.

Mark Baker, a Brandon Republican, introduced the Law Enforcement Identity Protection Act, which can negate the capital city's new policy of identifying officers involved in shootings within 72 hours of the incident unless a compelling reason exists to wait longer.

A controversial officer-involved shooting happened in Flowood, near Brandon, on March 8, 2018. An unnamed officer had shot into Von McDavid's car from four to eight times in what police said was an attempted arrest. McDavid survived the encounter.

The 72-hour period is a national policing best practice recommended by the Community Oriented Policing Services of the U.S. Department of Justice. Naming officers expeditiously helps build public trust in policing, which in turn helps police with intelligence gathering on crimes, as well as adds a layer of accountability into the system for officers deciding whether to use force. It can also expose dangerous cops not following their training.

House Bill 1289 originally sought to shield the identity and other details of police-involved shootings in Mississippi indefinitely. It would "prohibit the public release of any information regarding the name, residential address or physical description of any law enforcement officer who is involved in a fatality" until the Mississippi Bureau of Investigation decides to release the information. It includes penalties for violating such a law, and calls for a procedure for a law enforcement agency to follow working with MBI.

Baker warned that releasing names of police officers who shoot people could "throw them to the wolves."

Mark Baker, a Brandon Republican, introduced the Law Enforcement Identity Protection Act, which can negate the capital city's new policy of identifying officers involved in shootings within 72 hours of the incident unless a compelling reason exists to wait longer.

"Gentleman, this deals with law enforcement officers," said Baker, who is running for state attorney general this year. "If you want a bill that protects the identities of criminals, or people accused of crimes, you can bring that out. This bill is to give the officer a little breathing room.... He has to worry about the internal investigation, and, at the same time, his spouse and his children."

That argument, however, leaves out that families, friends and associates of victims of police shootings often already know exactly the identify of the officer who shot or injured their loved one—meaning that anyone out for retaliation likely has the information. Most of the shootings in Jackson, for example, occur between officers well known for policing the neighborhoods where the incidents happen. It's the general public that is left not knowing, for instance, whether a police officer is routinely involved in shootings, or the circumstances for those shootings.

For instance, two officers were involved in multiple shootings in Jackson since November 2017. Officer Rakasha Adams shot and killed two people less than two months apart, and Officer Anthony Veasey shot and injured three people on active duty. Adams is on a 90-day suspension for violating department policies in the death of Crystalline Barnes in late January, and Veasey is out on paid leave during an investigation for his third shooting.

Rep. Christopher Bell, a Jackson Democrat, pushed back against the proposed legislation. "When anyone else is accused of crimes, are their identities not published?" Bell, who is black, asked the white sponsor of the bill. "Are their mugshots not taken and published in the newspaper?"

"Why should (law enforcement) be treated any different than regular citizens?"

The bill and its penalties, if enacted, would use state law to require Mississippi to be one of the least transparent states in the country on officer-involved shootings.

Jackson has never routinely named officers involved in shootings or other potentially deadly use of force—a highly unusual indefinite withholding of public information compared to most cities in the United States. Policing best practices calls for a balancing of the needs of the officer with the public's prompt right to know his or her identity and the details.

The Jackson Free Press started raising this issue in editorials and reporting just over a year ago after a spate of officer-involved shootings that has continued into the present, with 12 officers involved in nine shootings from November 2017 through January 2018.

Mayor Chokwe A. Lumumba convened an officer-ID task force that met for months before deciding in October 2018 to recommend that names be released within 72 hours of a shooting incident in most cases. Lumumba then signed an executive order calling for that turnaround, although the City would not clarify the date of the order nor provide a copy in January.

Still, the City did not immediately start releasing names on that schedule, including the names of two officers—Anthony Veasey and Jarron Carter—who fired on two teenagers in South Jackson during an apparent burglary on Jan. 5, 2019, hitting the 18-year-old, Perez Porter, seven times, including twice in the back, his family tells the Jackson Free Press. Police say Porter fired on them first.

Lumumba also refused to release names of the officers accused of hitting George Robinson, 62, over the head with a flashlight, allegedly leading to his death two days later. The mayor said the executive order only applied to shootings, not beatings, and said he would re-convene the task force to decide whether to add other deadly force.

The Jackson Free Press started asking a year ago for names and details of officer-involved shootings in Jackson since Lumumba took office in July 2017, inheriting the long Mississippi tradition of not naming officers involved in use of deadly force. Finally, in January, the City of Jackson responded to a public-records request submitted by intern reporter Taylor Langele with names and details of the nine officer shootings to that point, including the status of officers involved.

A Hinds County grand jury declined to indict eight of the officers, including Adams and Veasey, in April 2018. Without the list the City provided to this newspaper, it is likely no one would have ever known the number of officers either presented to the grand jury or who the Jackson Police Department exonerated after internal investigations.

A grand jury did not indict Adams, but she is on a 90-day suspension for violating department policies in the death of Crystalline Barnes in late January. She returns to duty in late February.

If HB 1289 does become law, it is not likely to be as open-ended as Mark Baker originally envisioned it. Baker, also the chairman of the powerful Judiciary A committee that sent the bill forward, had no time limits in his bill.

During discussion on the House floor, Baker joined Rep. Kevin Horan, D-Grenada, and Rep. Nick Bain, D-Corinth, to attach an amendment to require transparency in the reporting of officers who are involved in fatalities—saying their names "shall" be released within 180 days.

Based on what we now know about police shootings in the last 14 months, however, the bill as amended would still allow the shielding of officers who shoot someone who does not die, such as the three people Officer Veasey shot. In addition, with that law in place, an officer such as Officer Adams could remain on the force and be involved in another shooting within weeks without the public being aware of her first shooting, as happened in early 2018.

The bill passed the House 80-31. Rep. Bell still voted against the bill with the six-month amendment in place, as did most of the Jackson delegation.Rep. Joel Bomgar, a Republican from Madison, also voted against the bill. Rep. Kathy Sykes, D-Hinds County, voted in favor of the bill. It now goes to the Senate for consideration.

Ashton Pittman contributed to this report from the Legislature. Email Donna Ladd at [email protected] and follow her on Twitter at @donnerkay. Read more about officer-involved shootings at jacksonfreepress.com/policeshootings.

CORRECTION: An earlier version of this story stated that an officer killed Von McDavid in a shooting in Flowood. McDavid survived the encounter. We apologize for the error.