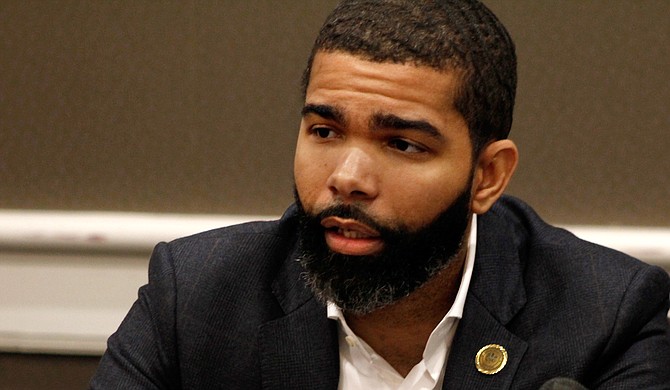 We call on Mayor Chokwe A. Lumumba to repair deep transparency issues within his administration and the Jackson Police Department immediately, and to start delivering on his promises of smart criminal-justice reform. Photo by Stephen Wilson.

JACKSON — After asking for a year, the Jackson Free Press finally received the names and current status of Jackson police officers who shot people in the capital city since Mayor Chokwe Antar Lumumba became mayor in July 2017. We got those files on Monday, months after the task force Lumumba appointed recommended in October 2018 that names of officers involved in shootings be released within 72 hours.

In fact, Jackson police shot a young man earlier this month during a house burglary, and the names of officers involved are not yet public.

Getting the files Monday was a journalism victory, of course, but it was a hollow one because the mayor should have released those names and details around the investigations much sooner than he did. Not to mention, the same day, his staff handed media a press statement at a briefing attended by Jackson Police Chief James Davis that refused to reveal the names of K9 unit officers being investigated in the head-trauma death of George Robinson, 62, in the Washington Addition.

The mayor's poor reasoning in the statement for not releasing the names of officers who may have killed Robinson? The task force's recommendations were only about officers involved in shootings—not potentially in an incident of hitting an aging man over the head with a flashlight and then charging him with resisting arrest.

In the statement, Lumumba said he would reconvene the task force to consider whether to add other types of deadly force to new policy.

That reasoning is an obvious delaying tactic and treats Jacksonians like we're stupid. Obviously, a policy governing when officers' names are going to be released for deadly or dangerous use-of-force should include whatever kinds of weapons they choose to use, even if it's just their hands. The last thing this city needs is another drawn-out deliberative, contentious and repetitive process where the task force does not start on time or might not even get a quorum, and decide not to actually meet as happened once at a meeting scheduled at Mynelle Gardens in west Jackson.

The Lumumba administration's poor transparency goes deeper than naming officers involved in shootings. WLBT today published an impressive investigation of how the Jackson Police Department reports crime data, down to doctoring of police reports, which the TV station says is "a lack of transparency that could threaten the safety of those who live within the Capital City." Its investigation also delved into incorrect crime stats being reported, a discrepancy we noted earlier this month in how many homicides were reported on COMSTAT documents versus the police spokesman's number.

The City of Jackson's transparency problems even extend to easily answered questions. On the same day that the administration released Lumumba's statement saying he will reconvene the task force before releasing the names of officers under investigation for Robinson's death, the Jackson Free Press asked for a copy of the executive order he mentioned in the statement—an order that Lumumba's staff says he signed ordering the 72-hour name release in shootings. We were told we would have to go through the online system for what we presume is a one-page document, and that automatically adds at least a week to the turnaround time under this administration. 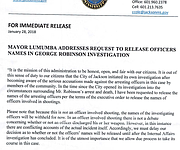 The real kicker is that neither Chief of Staff Safiya Omari nor spokeswoman Candice Coleman would tell us the date that the mayor signed the executive order—a withholding of simple information that makes no sense whatsoever.

Mayor Lumumba ran on a platform of criminal-justice (and presumably policing) reform, but Jackson has seen little of that so far in his administration, and in many cases the exact opposite. We endorsed the mayor expecting those efforts to kick in immediately and believing the transparency, including about policing, would improve immediately. That has not happened.

We call on the mayor to strongly lead his administration on this front, with him, his chief of staff and chief administrative officer ensuring that the transparency promises and organization needed to be fully accountable to the citizens of Jackson begin immediately.

Donna Ladd is the editor-in-chief of the Jackson Free Press. Follow her on Twitter at @donnerkay and email her at [email protected]