With 84 Homicides in 2018, City Hopes to Stem Violence With New Cops, Strategy 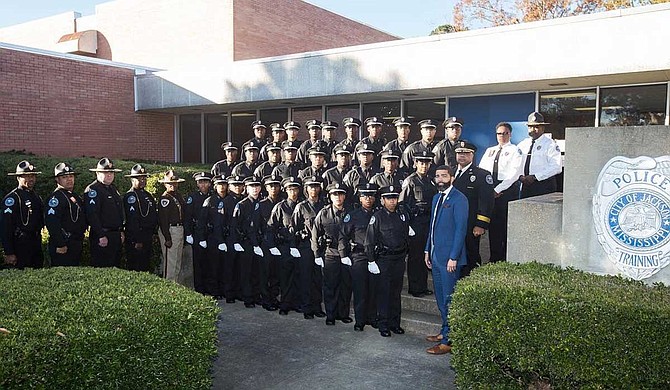 The 57th Jackson Police Department Recruit Class graduated on Dec. 21, 2018. These 29 officers will begin work in a city with a 30-percent homicide increase from 2017 to 2018. Credit: Courtesy City of Jackson Photo by Imani Khayyam.

JACKSON — The City of Jackson ended the year with 84 total homicides—a 30-percent increase over 2017's year-end count of 64. That figure, however, may include six justifiable homicides, which are usually self-defense. Three of those, police say, were by Jackson police officers who the City of Jackson have not named to date.

April was the deadliest month with with 12 homicides of people between the ages of 19 and 61 years old. One of those included rising hip-hop artist Lonnie "Lil Lonnie" Taylor, 22. He had been driving around his hometown of Jackson with a woman in the passenger's seat around 10 p.m. on April 29 when someone shot into his car, killing him. His case remains unsolved.

In the last year, the Jackson Police Department continued to dwindle in size due to terminations, resignations and retirements. During budget hearings this summer, Chief James Davis, then interim, said that the police force was budgeted for 418 officers but fell 96 short.

A new 29-member recruit class graduated from the Police Academy on Dec. 21 as the City's 57th class. Mayor Chokwe Antar Lumumba charged them with being models and leaders in the community.

"You're well aware of the sacrifice it has taken you to get to this day," he said at the ceremony. "The Jackson Police Department not only serves the community; the Jackson Police Department is a part of the community. As we see a world where the profession of policing is being challenged everywhere we look, this is a space where we're going to make a model for the rest of the country because we're going to be a community-engaged police department."

The City will start the year with a creative approach to crime-fighting, taking advantage of a grant awarded to Rukia Lumumba, the mayor's sister and founder of the People's Advocacy Institute. FWD.us gave her a $150,000 grant to begin credible-messenger training, an effort gaining traction around the nation where reformed criminals, also called violence interrupters, are trained to mentor and prevent young people from entering a life of crime. "[T]hank you for being open-minded and committed to really shifting how we look at crime, how we look at human life and dignity, and to really appreciate our (first) credible messengers ... who are here with us today," Rukia said at the Dec. 13 press conference announcing the initiatives. Terun Moore and Benny Ivey, two future credible messengers, stood behind her. JPD Assistant Police Chief Ricky Robinson attended a conference that the Credible Messenger Justice Center hosted, and supports the initiative.

Another active crime-fighting partnership in the City of Jackson is more controversial, however.

In December, Hurst boasted that violent crime in Jackson was down approximately 7 percent in year-to-date statistics. His numbers come from a JPD COMSTAT report from the first week of December 2018, which also shows a 50 percent year-to-date decrease in carjacking—a federal crime.

However, the federal system will not allow Hurst's office to prosecute a lot of the most violent crimes, such as the infamous decapitation he mentioned when announcing the crime-fighting initiative in December 2017. Jeremy Jerome Jackson's head was found on the steps of a house in west Jackson in June 2017.

Correction and clarification: Two weeks after this story went to press, we learned that the City of Jackson experienced a total of 84 homicides in 2018, but that three of them were ruled justifiable homicides, usually indicating non-criminal self-defense and not murder. The number also included three officer-involved shooting deaths. The Jackson Police Department says that means the Comstat report should not include those six homicides, although it is unclear to us what the conditions were for the three officer-involved shootings because the City of Jackson has not provided their names or circumstances to date. We have, therefore, edited the headline above to reflect 84 "homicides," rather than "murders," but with the understanding that it includes at least three justifiable homicides.