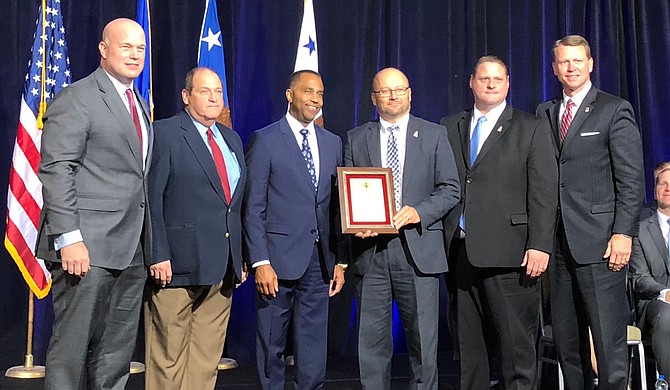 Whitaker bestowed the honor at the 2018 Project Safe Neighborhoods Conference in Kansas City, Mo., as one of 16 awards given during the gathering. Project Safe Neighborhoods is a George W. Bush-era federal gun-violence reduction program that former Attorney General Jeff Sessions re-launched in 2017, encouraging U.S. attorneys to develop multi-agency partnerships to target and reduce violent crime. Project Eject promises to send those convicted to federal prison far from Mississippi.

"The Southern District of Mississippi started Project EJECT—which brings together federal and local officers and prosecutors, the Mississippi state crime lab, nonprofit organizations, faith leaders and community leaders," Whitaker said. "... In other words, they're hitting violent crime from every angle—and it shows."

Whitaker also touted a lower crime rate in Jackson as of October. However, the reality on the ground is the capital city has seen 79 homicides so far in 2018, compared to 64 homicides total in 2017. New Orleans, a city three times more populous than Jackson, is at 135 murders for the year. As of Dec. 7, Washington, D.C., has seen 153 homicides.

During remarks on the closing day of the conference, President Donald Trump also sang praises of the Bush-era program.

'Smearing and Slandering Our Police'

In a room filled with top law-enforcement officials from across the country, Trump wanted them to know that he had their backs. Trump called for the death penalty for "cop killers" and said he will continue to funnel resources into their collaborative efforts at any cost. He said he already increased Project Safe Neighborhoods' funding by $50 million and will ask Congress for more.

"At the core of our strategy is restoring respect of law enforcement," Trump said. "There is nobody that deserves respect more than you people, that I can tell you. For too long, many politicians and radical activists have been smearing and slandering our police, making life easier for criminals and harder for law-abiding Americans. We will not tolerate attacks on the heroes that protect our streets and defend our communities.

A year ago to date, U.S. Attorney Mike Hurst announced Project EJECT at the base of the U.S. Courthouse in downtown Jackson, now named for retired U.S. Sen. Thad Cochran. In a statement, Hurst said he is proud of what he has been able to accomplish with help from the FBI., the Jackson Police Department and the Hinds County District Attorney's Office, among other state and federal entities.

"Just one year ago, we launched Project EJECT with the intent of making our capital city safer for everyone. I'm incredibly proud of what our partners, our office and our prosecutors have been able to accomplish in such a short period of time," Hurst said in a statement. "By empowering our citizens and working together, and doing more than just prosecute crimes, we are reducing overall violent crime in the city of Jackson and making our communities safer. I look forward to continuing this important work in Jackson and expanding it throughout the Southern District in the coming year."

A Jackson Free Press analysis found that in the first two months of Project EJECT, 40 percent of those indicted were felons in possession of a firearm. Of 17 Project EJECT cases since July, all but five cases involve a convicted felon in possession of a firearm, a federal crime. One of those five is an "illegal alien" from India who possessed a firearm and had allegedly shot someone in a convenience store after overstaying his visa.

In Trump’s remarks, he referenced the wall along the Mexico border several times and lambasted "sanctuary cities." He said Project Safe Neighborhoods also go after “aliens with criminal records.”

"The amazing results of Project Safe Neighborhoods prove just how critical it is to foster cooperation among law enforcement at every single level of government," Trump said. "Nowhere is this cooperation more important than when it comes to enforcing our nation’s immigration laws."

Project EJECT also led to a cooperative sting to go after a mix of alleged criminals with outstanding warrants, gang members and their associates, and sex offenders, resulting in arrests of 45 individuals of various races. Almost 75 percent of them were identified as gang members, including Gangster Disciples, Vice Lords, Simon City Royals, Latin Kings and Aryan Brotherhood, Hurst said in April. He has not, however, released more details on the results of that sweep.

Officers identified targeted gang members through word-of-mouth and tattooed insignia, Hurst said at the press conference, but he would not divulge further details about how they decided who was in a gang or on the round-up list. Nationally, how people get into gang databases is controversial, and in Jackson law enforcement has been vague on the exact criteria and information-gathering techniques to date. In Mississippi, from 2010 until 2017, all alleged gang members prosecuted under the state's existing gang law were African American, although the state has a large number of white gang members.

The U.S. attorney diverted a question from a reporter about whether or not Jackson has seen a surge in gang activity, pointing instead to a surge in law enforcement. He added an oft-quoted and unsupported statement by law enforcement and tough-on-crime politicians—that some people deny that there is a gang issue in the state.

"But I think, not only the arrest, but the engagement with various gang members this week show that we have a gang problem not only in Jackson, but I think you'll start to see this around the state, unfortunately," Hurst said in April.

This summer, Hurst also touted "Operation Triple Beam," which may have some overlap with the aforementioned sting.

From April 9, 2018, through May 17, 2018, U.S. Marshals and more than 25 other federal, state and local law-enforcement agencies seized 50 firearms, including military-style assault rifles, illegal narcotics valued at approximately $7,500, and approximately $26,000 in cash and arrested 270 people, 90 of whom Hurst's office says were members of the Gangster Disciples, Vice Lords, Simon City Royals, Latin Kings and the Aryan Brotherhood.

Whitaker's days in the interim position are likely numbered, as Trump announced William Barr as his nominee today. Barr was the late President George H.W. Bush's attorney general from 1991 to 1993 and is known for being tough on crime. In his introductory remarks before Trump spoke at the Project Safe Neighborhoods conference on Dec. 7, Whitaker praised Barr as someone who will continue Trump's law-and-order presidency.

But, Barr has to await Senate confirmation before taking the helm. In the meantime, an embattled Whitaker will lead.

To date, over 500 alumni from the U.S. Department of Justice issued a statement outlining their concern with Whitaker at the helm because the Senate had not confirmed him, and he has openly criticized the Robert Mueller investigation.

But, in his current capacity, Whitaker has made it clear that Sessions' violent-crime staple will likely continue even after Trump fired him last month, meaning the Project EJECT strategy will continue in Mississippi, even if homicide has gone up in Jackson during its tenure here. Violence experts and studies warn that such sweeps can increase violence due to sudden voids in group or gang leadership; instead more sophisticated policing is needed to reduce the violence.

Ron Noblet, a lead investigator on the Legislature-funded 2016 BOTEC analysis study of Jackson gangs and crime, told the Jackson Free Press earlier this year that rounding up suspects who are merely associated with a gang but who may not be involved in crime creates massive distrust among the very people police need to help them with intelligence gathering. Street violence requires smart counter-intelligence, he said, which "targets good guys to protect." And no one should be rounded up simply for being in a gang, he said. You need them for intelligence-gathering on the people likely to commit violence.

Noblet trains law enforcement around the country in effective gang intervention and consults with the Urban Peace Institute in Los Angeles, Calif., to lower violence. He says that large sweeps and gang laws that make it easier to apprehend someone for simply identifying with a gang is "15 years behind" the times as a crime-fighting method.

"One of the basic ways to protect them is to start treating the good guys as human. ... It takes a long time to develop trust. You get the good population to separate themselves to separate themselves from embedded bad guys." Then it's easier to spot the shooters, and the good ones might help you find them. "That's targeted suppression," Noblet said.

Whitaker was a U.S. attorney in Iowa about 15 years ago—from 2004 until 2009, and he carried out Project Safe Neighborhoods initiatives that he believes deter crime.

"After all, PSN is about empowering our people out in the field. Rather than having Washington, D.C., dictate a uniform approach, PSN directs our U.S. attorneys to work with their communities to develop a customized crime-reduction plan to target the most violent criminals in the most violent areas, and to prevent and deter violent crimes before they happen," Whitaker said at the Project Safe Neighborhoods Conference. "I ran this program for five years as a United States attorney in Southern Iowa, and I know that it works. I've seen it first-hand."

Project Safe Neighborhoods under George W. Bush was extremely expensive, as it required $2 billion since its inception. Crime experts, such as David Kennedy who helped conceive and implement the Boston Gun Project, later known as Operation Ceasefire (which Hurst claims Project Eject is modeled on) says the Project Safe Neighborhood approach has long targeted mostly African Americans, and he says studies show it does not lower violent crime over time.

Project EJECT recently got more funding to continue, and $177,361 of a the $30 million in funds the Justice Department will use to further its violent-crime strategies nationwide.

The program also has work to do in its re-entry arm. Project EJECT has not delivered on its promises to bring together faith, community and business leaders to help transition citizens back into society, although Whitaker touted those promised partners in his remarks on Dec. 6.

In Kansas City, Trump said that reforming the prison system to help more former inmates get on the right track, and that Project Safe Neighborhoods community partners will help do this.

"We all benefit when those who have served their time can find a job support their families and stay the hell out of jail...that's why I have called on congress to pass the FIRST STEP Act," he said."