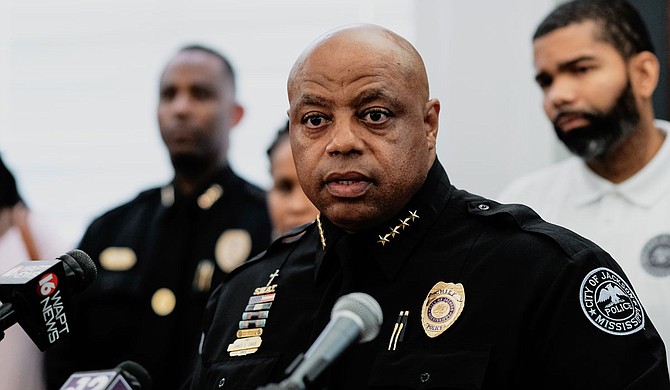 Days after U.S. Attorney Mike Hurst chided Jackson public officials for being too soft on crime, Jackson Police Department Chief James Davis held a press conference to highlight 82 arrests in the city. Speaking from the JPD headquarters on Dec. 26, Davis told journalists about the results of a renewed effort to curb gun violence in the city under the auspices of a new task force called "Operation Targeting Gun Violence."

James described "Operation Targeting Gun Violence" as a joint effort between 40 JPD detectives; the Bureau of Alcohol, Tobacco, Firearms and Explosives; the Federal Bureau of Investigation; the Drug Enforcement Administration; and the U.S. Marshals Service.

The collaborators established the task force on Dec. 9, and officers began making arrests on Dec. 10, the chief said.

Davis offered a breakdown of the 82 arrests. Police charged 53 with felonies and 33 with misdemeanors, he said. Twenty-two people face murder, aggravated assault or armed robbery charges, and six were arrested for felony possession of a firearm. Davis added that the JPD had made three murder arrests since Dec. 10. In total, JPD seized 18 guns "from the hands of very dangerous individuals," he said.

Three days before Davis' announcement, on Dec. 23, Hurst had stood before reporters and accused local judges in Jackson of releasing violent offenders from jail and compromising the public safety of the city's residents. He also accused local politicians of downplaying violent crimes in Jackson.

Hurst pointed to 25 arrests in Jackson between Dec. 17 and Dec. 20, through Project Guardian, as proof of elevated crime levels in Jackson.

The U.S. Department of Justice launched Project Guardian in November. It is a nationwide initiative to reduce gun violence across the country through collaborative efforts between federal, state and local law-enforcement agencies. The DOJ describes it as "a complementary effort to the success of Project Safe Neighborhoods (PSN)," a U.S. Attorney General Jeff Sessions-backed nationwide umbrella initiative to fight crime.

In December 2017, Hurst announced the controversial Project EJECT program, Mississippi's version of PSN, in which federal law enforcement coordinated with local and statewide officials to prosecute gun-related crimes. Under Project EJECT, which then JPD Chief Lee Vance supported, the U.S. attorney's office could prosecute those arrested, resulting in people being sent away to distant prisons across state lines. Vance, who soon left JPD, is the incoming sheriff of Hinds County.

It is unclear whether or how Operation Targeting Violence is related to Project EJECT. Davis did not directly respond to a reporter's question about how the new initiative differed from Project EJECT.

"It's the Operation Targeting Gun Violence, that's the name of the task force. We're targeting gun violence here in our city," he said.

Neither JPD nor Hurst could be reached by press time today for additional questions.