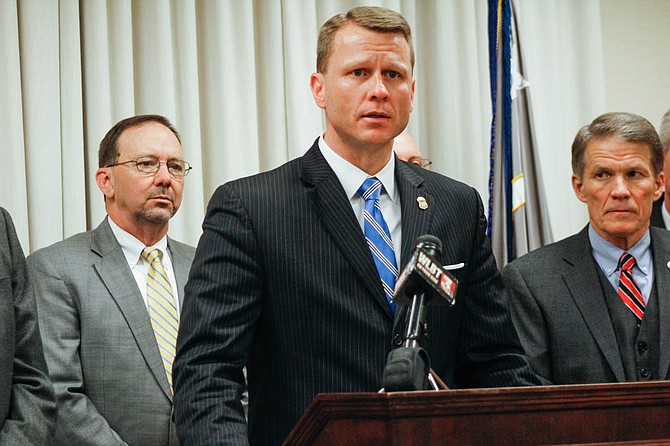 U.S. Attorney Mike Hurst, one of the top federal prosecutors in Mississippi, had tough words for officials in Jackson over violent crime in the city. Photo by Stephen Wilson

JACKSON, Miss. (AP) — One of the top federal prosecutors in Mississippi had tough words for officials in Jackson over violent crime in the city.

U.S. Attorney Mike Hurst said at a news conference Monday that local judges should stop releasing violent criminals “when there are facts to show they are a danger to our community," the Clarion Ledger reported.

And he told politicians to "quit denying there's a crime problem, a drug problem, a gang problem in our capital city."

The city experienced 84 homicides last year, the most in more than two decades, according to the Clarion Ledger. There were 79 homicides in Jackson as of Monday.

Hurst announced at the news conference that his office was partnering with the U.S. Marshals Service and several Jackson law enforcement agencies to crackdown on violent crime. In a four-day span from Tuesday to Friday of last week, 25 suspects were arrested, including four suspects for murder, he said. Authorities also recovered stolen cars, multiple firearms and drugs.

“To the citizens of Jackson, we are not giving up on you,” Hurst said. “This is our capital city. You are our fellow Mississippians."

Jackson Mayor Chokwe Antar Lumumba was out of town on business and told the Clarion Ledger he had not listened to Hurst's press conference.

But he cautioned against using anecdotal evidence to address crime in the city.

“I would advise anybody that's looking at Jackson to look at all the data,” he said.

The city was “not reluctant to say a crime is gang or drug-related," but it also didn't want to “create a false narrative," he said.