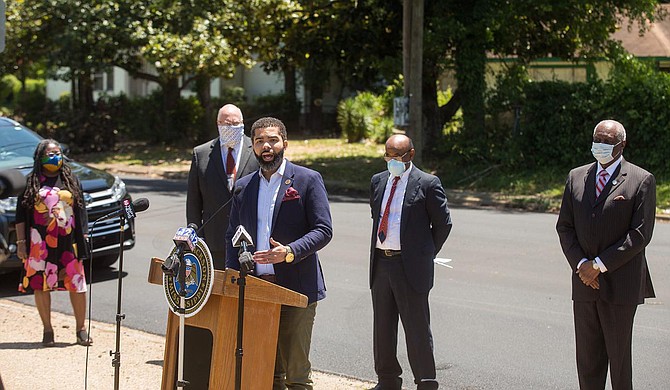 Robinson Road will see a three-phase repaving project made possible through a partnership between the City of Jackson and the Hinds County Board of Supervisors, Jackson Mayor Chokwe A. Lumumba announced last week. The first phase of the ongoing project will focus on Capitol Street and Ellis Avenue, and later expand to encapsulate additional areas of Jackson, including Highway 80 and parts of Woodrow Wilson Avenue.

“We’re excited for what we’ve done so far, but we’re far from satisfied. … Just as we campaigned last year saying it’s paving season, you will see that going forward,” Lumumba said during the May 6 press briefing in west Jackson to announce the project.

The second phase of the project includes Ellis Avenue to Highway 80 and the third phase includes Highway 80 to Interstate 20. The City also plans to repave a stretch of Woodrow Wilson Avenue between Fortification Street and Martin Luther King Drive.

‘A Rising Tide Lifts All Folks’

“(This) project itself represents the collective work of not only the city and the county, but of multiple supervisors. And so we’re thankful not only for the present work of Supervisor Credell Calhoun, but I would be remiss if I did not acknowledge the great work of his wife, former Supervisor Peggy Calhoun,” Lumumba said.

The mayor also expressed gratitude to Ward 5 Councilman Charles Tillman, whose ward sits in the areas that the City will repave, for advocating on behalf of his constituents.

“Thank you to all the partners, all the commitments to the City of Jackson, our beloved capital city. Let’s make it a shining star for Mississippi,” Tillman remarked during the briefing. He added that his west Jackson constituents “have pressed for this project for a long, long time.”

The Hinds County Board of Supervisors contributed a $950,000.00 grant it had secured from the Metropolitan Planning Organization toward the repaving project. The City of Jackson used its 1% Sales Tax Commission proceeds to match the county’s grant with an additional $1,085,058.82.

“I want to continue to express my appreciation to the residents of Jackson who through their sacrifice and decision to tax themselves has enabled us to take on far more projects with the City than we would have been able to do without that support,” Lumumba said.

The mayor stated that his administration intended to carry out more repaving projects. He also reiterated his commitment to ensuring that all Jackson residents benefit from beautification and redevelopment projects and other infrastructure improvements.

“We are very excited about the projects you will be seeing in the coming months, and we are excited about how it spreads across the city,” Lumumba said. “We want to make certain that as we build Jackson, that a rising tide lifts all folks, and that we don’t create an island of wealth surrounded by a sea of poverty.”

The mayor also reiterated that the City of Jackson’s revised stay-at-home order was still in effect until May 15 despite Gov. Tate Reeves’ more lax safer-at-home order.

The mayor’s executive order limits restaurant and bar operations to curbside, take-out and delivery service. Retail establishments, too, are allowed only to operate curbside, Lumumba said.

Lumumba pointed to the rise in COVID-19 cases, which coincided with the governor’s ongoing efforts to reopen the state, as the reason for why his administration was continuing to implement stricter measures in dialogue with the City of Jackson’s COVID-19 task force.

On May 8, the Mississippi State Department of Health reported 404 new COVID-19 cases in the state. It was the highest single day increase of new confirmed infections in Mississippi. By press time, the state had seen 9,674 confirmed cases and 435 deaths.

In Hinds County, the most populous county in the state, health officials have confirmed 675 cases of COVID-19 and at least 15 deaths. Other, less populous counties like Lauderdale, Holmes, Forrest, Monroe and Pearl River counties have seen higher numbers of novel coronavirus-related deaths.

“We had a very robust discussion yesterday, and what we talked about is actually what we have seen in the last few days has been a spike in the number of cases in the State of Mississippi,” Lumumba said.

The mayor lauded residents and businesses in Jackson for contributing to the city’s “relatively low number of contracted cases and a relatively low fatality (rate).”

“Anyone who dies is a tragedy, but we want to make certain that we do all that we can to keep those numbers low,” Lumumba said.

He acknowledged that the city would reopen in the future, but vowed that his administration would proceed in the safest way possible.

“We absolutely know that at some point we have to open up, we can’t do this forever, … (but) we have to make certain that we do it intelligently, that we’re not just operating off of emotion, or anecdotal information, but that our process is data-driven and that our process does all that it can to protect the residents of Jackson,” he said.