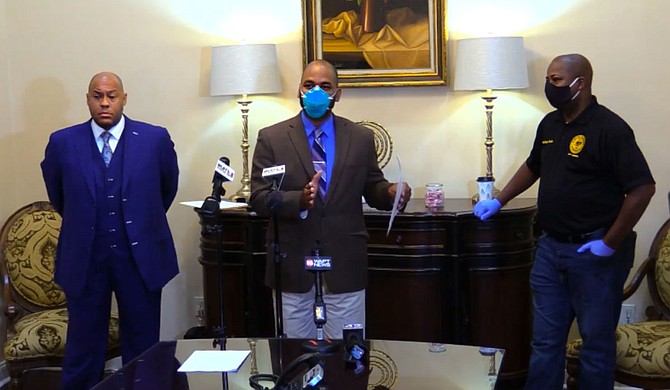 On April 29, Ward 4 Councilman De’Keither Stamps defended a lawsuit against Mayor Chokwe A. Lumumba and the City of Jackson over an executive order the mayor signed to temporarily suspend open carry of guns in Jackson. Courtesy De’Keither Stamps.

The Mississippi Justice Institute is pursuing a lawsuit against Jackson Mayor Chokwe A. Lumumba and the City of Jackson after he signed an executive order temporarily banning open carry of firearms in Jackson. The mayor signed the order on April 22 as the capital city struggles with two concurrent public-health crises, COVID-19 and gun violence.

The Mississippi Justice Institute filed the lawsuit on April 27 on behalf of Mississippi Rep. Dana Criswell. The lawsuit argues that the mayor’s executive order violates Mississippians’ constitutional rights and the Second Amendment.

“When we took office, we took an oath to uphold the laws of the State of Mississippi,” Banks said to reporters inside Martin’s law office in downtown Jackson.

“This is not a debate on whether the open-carry law is beneficial to some citizens or others. This is making sure that the City of Jackson upholds those laws,” he continued. “Meanwhile, we must send a tough message to make sure that we find other options to eliminate gun violence and violent crime within the city of Jackson.”

“We can’t fix a wrong with a wrong,” Banks added.

Stamps echoed Banks’ sentiments, explaining that the lawsuit against the mayor also aims to protect the City of Jackson from additional lawsuits it can face for allowing an illegal ban to take effect. He acknowledged the problem of gun violence in Jackson but urged the administration to consider alternative measures to address it.

“The council adamantly supports measures that reduce gun violence by the police department,” Stamps said. He pointed to recent police efforts, prior to the mayor’s executive order, which he said resulted in the seizure of 23 illegal firearms.

“Let’s do more of that. Let’s double down on those efforts that yielded those results. But to violate people’s Second Amendment rights is what we stand against and safeguard the city (from),” Stamps said.

City spokeswoman Candice Cole stated in a text message to the Jackson Free Press Wednesday that Mayor Lumumba could not comment on the council’s lawsuit “because it’s pending litigation.”

Lumumba: ‘How Many Babies Do We Have to Bury?’

The mayor’s executive order came during a deadly year in Jackson, with two particularly tragic incidents during the COVID-19 pandemic. On April 15, two weeks into the Gov. Tate Reeves’ shelter-in-place order, a stray bullet struck 5-year-old Queenyanna Davis in the head as the little girl sat in the living room of her family’s home Wood Village Apartments complex in Jackson. The girl died.

One week earlier, in a separate incident on April 8, a stray bullet struck 11-year-old Watkins Elementary School student Jordan McCoy, while he slept. Law enforcement reported that, around 3 a.m., the assailant had fired 40 rounds from a rifle at the Berwood Apartments building. The boy died, and police have not announced arrests or suspects.

In 2019, Jackson experienced 82 gun-related homicides, down just 2% from the previous year, which saw one of the city’s highest murder rates in decades. Gun-related deaths have surged in the capital city since 2017, from 64 homicides that year to 84 homicides in 2018—a 31% increase.

As the novel coronavirus pandemic continues to wreak havoc on the health of Americans across the country, gun-reform advocates are urging elected officials to continue funding and implementing gun violence-prevention initiatives in their local communities. Such measures are even more necessary, organizations like Everytown for Gun Safety argue, given the recent dramatic spike in gun sales during the COVID-19 crisis.

This week, the Trace published a report on gun violence amid nationwide shelter-in-place orders. It found that, while robberies and drug-related offenses decreased amid COVID-19, instances of gun violence either remained the same or increased in several major cities.

The mayor referenced the recent deaths in an April 24 video announcing the executive order he had signed two days before. Last Monday, the mayor also announced that he is offering a $10,000 reward for information that would bring 5-year-old Davis’ killer to justice.

“In the space of just one week, two innocent children lost their lives due to senseless gun violence,” Lumumba said. “Many of these killings could have been avoided if we had state law that enabled us to better control the presence of firearms on our streets.”

In an April 26 letter to Lumumba, Attorney General Lynn Fitch questioned the mayor’s argument that open carry led to the deaths. “(T)here is no evidence that the State’s open carry law was implicated in these crimes or that your order would have changed the outcomes,” Fitch wrote.

Lumumba explained the efforts the City of Jackson had taken in recent years to address the gun-violence epidemic in the city, including Jackson’s inaugural violence-interruption and credible-messenger initiative, which now has paid messengers as of recent weeks.

“[B]ut these measures alone will not stop the gun crime that we have become all too accustomed to experiencing,” the mayor warned.

“The City of Jackson faces a significant challenge with illegal guns. The Open Carry Law interferes with law enforcement’s ability to take illegal guns off of the streets,” he explained.

“Prior to open-carry when Jackson police officers saw a gun in plain view, it gave them probable cause to seize the weapon and determine whether or not it was an illegal gun,” the mayor said. “The open-carry law not only provides protection for individuals who are armed with illegal weapons; it also creates an atmosphere of fear and intimidation in the community.”

“We cannot continue to turn a blind eye to the fact that the open-carry law has led to an increase in gun violence in our communities,” Lumumba said.

He pointed to National Center for Health data that found that gun-related deaths of children in the South had increased significantly—72%—since 2013.

“How many babies do we have to bury to appease someone’s desire to open carry?” the mayor asked at the end of his remarks.

Priester reiterated that he was “not a gun fan” and that he “(supports) limitations on gun and gun sales” before pointing to possible problems in enforcement of Lumumba’s new ban.

“It's clear to me from his public statements and yesterday's meeting that the Mayor is not going to apply this EO (executive order) to ‘Good-guy Bob the Neighbor’ or the Political Activist. Who does that leave then? Where do the people who are subject to enforcement live and why does the 4th Amendment right to reasonable suspicion get tossed in their part of town?” Priester asked.

“This whole thing, if enforced, will be bad policing, over-policing, and lead to bad results such as the erosion of community trust more so than actually taking guns away from ‘bad guys,’” the councilman speculated. “If we need more officers and better training, let's focus on that rather than this distraction,” Priester said. “If there are other things we can do to tackle illegal guns and move things through the criminal justice system, let's do it.”

Priester emphasized the importance of strengthening education and jobs as a way of improving the socioeconomic conditions that too often lead to violence.

At the conclusion of yesterday’s special council meeting, Lumumba’s Chief of Staff Dr. Safiya Omari defended the mayor’s executive order and his motivations in signing it.

“I want our citizens to know that he was very thoughtful with the position he took about open carry and felt that this was the most expedient way of beginning to find some relief to the pain and the grief and the violence that our citizens experience daily,” Omari said.

“It was not a matter of grandstanding,” she added.

“No one should go to bed at night hearing gunshots, no one should fear sitting on their front porch or walking to their mailbox,” she said. “This action is about the public safety of the citizens of Jackson.”

Omari reiterated that the mayor did not sign the executive order out of “disrespect for the Second Amendment.” Nevertheless, Omari emphasized the need for tighter gun regulations to minimize the risks to human life.

“We know that there are laws on books, but as an African American, I can tell you we are disproportionately impacted by this gun violence just as we were disproportionately impacted by a number of laws that were on the books of the State of Mississippi,” Omari said. “So laws are laws, yes, but not every law is a just law. We are seeking justice for our citizens and we will fight for that justice,” she said.

CORRECTION: In the original version of this article, the reporter wrote that the Jackson City Council sued Jackson Mayor Chokwe A. Lumumba. This is incorrect. The council passed a resolution that separates the council from the mayor's executive order. The Mississippi Justice Institute filed the lawsuit. We apologize for the error and have edited the above article to reflect the correction.