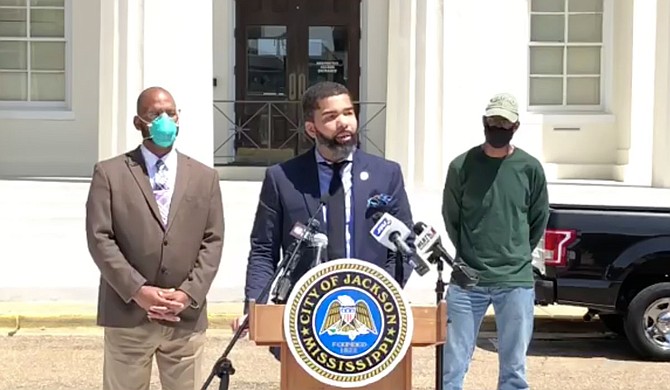 On April 27, 2020, Mayor Chokwe A. Lumumba announced that the City of Jackson had filed a lawsuit against Canadian National Railway over a blocked railroad underpass in west Jackson. The City is demanding that the railroad company pay for and reopen the underpass after the company closed it in 2016. Photo courtesy City of Jackson

At the April 27 press conference, Mayor Chokwe A. Lumumba described how the road closure has not only inconvenienced residents, but also put their lives in danger by making it difficult for firefighters, ambulances and other first responders to reach people in a timely manner.

“It has pinned community members in, it has left them susceptible to not receiving swift response from first responders,” the mayor remarked outside City Hall in downtown Jackson.

“It has kept them from being able to have the conveniences that they so deserve, and often the railroad company allows the train to sit on the tracks between ... Northside Drive, California Avenue and Livingston Road. That has pinned them in and left them susceptible to many dangers,” he said.

Lumumba said the City’s prior requests to Canadian National to “alter its operation and avoid routinely blocking simultaneously the concurrent intersections” had “fallen on deaf ears.” Hence, the City is pursuing legal action.

In a phone interview today, Ward 4 Councilman De’Keither Stamps, whose ward includes the affected area, described Canadian National Railways’ action four years ago as “illegal.” Ward 3 Councilman Kenneth Stokes had previously raised concerns to the media that the railroad company did not seek the council’s input before moving forward.

Though the mayor acknowledged that the closure of the road occurred before he came into office, Lumumba questioned Canadian National Railways’ decision-making process.

“The railroad company is aware that any city operates through its council and its mayor, so not having either the council or the mayor speak to this issue means that it was an unsanctioned action that was taken,” Lumumba said.

“We want to make it clear that we are not going to sit by in the City of Jackson and not stand up for our residents,” Lumumba added.

“It’s a very bad and dangerous situation,” he said, especially for the children who have to get to school. When trains do pass the area, they disrupt the flow of traffic or block it altogether for prolonged periods on both sides of the tracks, Stamps said. He noted that the trains sometimes even stop for lunch breaks while on the tracks.

“When the train is on the track at 7:30 a.m., the track is rerouted around multiple school zones, and so when people are trying to get to work, they’re rushing, they’re putting our children at risk of being hit by the cars that are going through these school zones,” Grizzell said.

“We’re an old neighborhood, we have a bunch of seniors, and it’s a real convenience to drive another half mile and then come back another half mile to get to some place that was just 400 yards from them,” Norwood said.

The closure also negatively affects area businesses, Lumumba said, and forces customers to take their business elsewhere. “We can no longer wait for Canadian National to do what is right. So many of our citizens have been frequently blocked and delayed from going to work and returning home and from going about their daily business,” he said.

“In filing the lawsuit we are seeking to reclaim what rightfully belongs to the citizens of Jackson,” the mayor said.

Jacksonians can report their concerns about blocked railroad crossings through a website that the Federal Railroad Association created in 2019. That website is www.fra.dot.gov/blockedcrossings/.