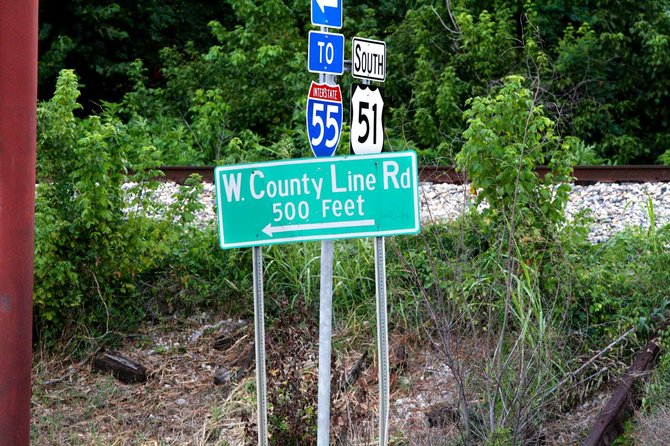 The city plans to connect East County Line and West County Line roads, separated by an approximately 100-yard gap and a railroad. Photo by Jacob Fuller.

The city of Jackson plans to use eminent domain to secure 32 pieces of property in north Jackson as part of a project to connect East County Line and West County Line Road.

Public Works Director Dan Gaillet said many of the properties are vacant. But procuring the land could take a while, because the city has not been able to contact the current owners in many cases. The city expects to have to go to court to acquire at least 22 of the properties.

On June 26, the Jackson City Council approved an order for the city to file condemnation proceedings on three of the properties in the Court of Eminent Domain by a vote of 5 to 0. Ward 3 Councilwoman LaRita Cooper-Stokes and Ward 6 Councilman Tony Yarber were absent from the meeting.

Mayor Harvey Johnson Jr. said the project is important because the current layout of County Line Road does not allow direct access to Tougaloo College or the possibility of economic development west of State Street in that area. He said the city first identified the need and funding for the project during his first mayoral term during the 1990s.

The mayor's mention of economic development raises questions in light of the state's new eminent domain law. In November, voters overwhelmingly approved a new law that prevents state and local government from using land procured through eminent domain to be transferred to "any person, non-governmental entity, public-private partnership, corporation, or other business entity" for a period of 10 years.

Exceptions to the law include properties deemed a public nuisance, structures unfit for human habitation and abandoned property.

The purpose of the law was to prohibit government bodies from using eminent domain for private development or enterprise. Governments are, however, still allowed to use the property for drainage and levee facilities, roads, bridges, ports, airports, common carriers and utilities.

Included in the properties the city intends to procure through eminent domain are a few homes with tenants, Gaillet said, but he did not know the exact number.

"We feel like we're going to save those for last, so people can live there as long as possible," Gaillet said.

Johnson said the city wouldn't be taking anyone's land through eminent domain without proper compensation. However, the court may have the final say on the properties.

The new design would include a railroad bridge, which would allow travelers to drive under the bridge and continue on West County Line Road without interruption from passing trains. It would also allow trains to pass the intersection without blowing their whistle. The noise of the whistle is a problem for citizens who live nearby, especially late at night, said Ward 7 Councilwoman Margaret Barrett-Simon at the meeting.

Gaillet said he does not know all the details of the project, which city engineer Robert Lee is heading up. Gaillet said in a June 29 phone interview that the city would move the railroad that runs parallel to State Street from its intersection with Interstate 220 to the crossing at Brown Street. That rail line does not cross Interstate 220, however.

The city has already completed the first part of phase 1A. It included moving the Tougaloo College Post Office to its current location across West County Line Drive from the college and expanding West County Line Road to four lanes in front of the campus.

Gaillet said the city will fund about 20 percent of phase 1A, roughly $2.5 million. Another $6.3 million will come from the federal government's TEA-21, or Transportation Equity Act for the 21st Century. The act, originally passed by Congress in June 1998, provides funding for a range of transportation initiatives including railway, highway, walking and biking-trail projects.

The city said it will ask the Mississippi Department of Transportation to request the federal funds available for the project.

Canadian National Railroad will help fund and construct the railroad track and bridge portion of the project. Gaillet did not know how much funding the railroad would provide.

Phase 1C of the project would include connecting Rand Street and Guice Lane. It also includes relocating Grant Street.

The city of Jackson has not established a timeline for starting or completing construction on Phase 1A, Gaillet said, due to the large number of legal issues the city will face trying to acquire the needed property. At the June 26 city council meeting, he said the city hopes to break ground on all three phases of the project by summer of next year.

With funding not yet secured and a lengthy court process on the horizon, it could likely be well over a year before the city breaks ground on any of the project, though. Once construction begins, Gaillet estimated it will take about 18 months to complete.

Johnson said new line will help reduce the occurrences of wide-spread water pressure loss and boil water notices. The ultimate goal of the project is to eventually close the 98-year-old J.H. Fewell Water Treatment Plant and move all water treatment to O.B. Curtis.

The Jackson City Council approved a contract with Morgan Contracting May 15 to install the water line.

I drive by this area almost daily on my way to and from work. I'm trying to figure out how that many properties are affected.