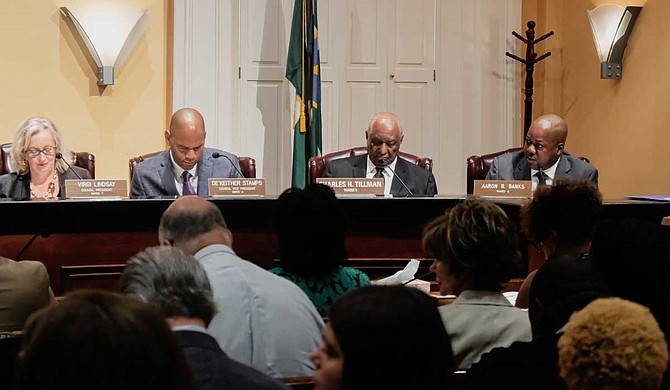 Jackson Ward 6 City Councilman Aaron B. Banks was the lone opponent of a $7-million plan for tackling issues with the city's water system at the Sept. 27 special meeting. Photo by Ashton Pittman.

UPDATE: This article states that city council had rejected a $7-million loan to help fix the city's water-sewer system. Although they did reject the loan on Sept. 27, the council reconvened on Oct. 1 for its regular meeting and voted to pass the loan.

At a special meeting late last week, the Jackson City Council blocked a $7-million emergency loan to fix its water-sewer system, which has been plagued with problems since the City signed a $90-million contract with Siemens Inc. for a new meter and billing system.

The council also voted to temporarily close the Jackson Zoo and stop paying benefits to current employees who will care for the animals until the new zoo operator can get a federal license to exhibit and care for animals—which the City calls an "oversight."

On the water front, the City asked for the emergency loan due to problems with water-sewer billing that have cost millions of dollars and worsened Jackson's debt.

Ward 6 Councilman Aaron Banks was able to block the loan as the sole vote against it because the special vote required unanimous consent to pass. Five members voted for the loan after raising concerns about it. Mayor Chokwe A. Lumumba and Butler Snow attorney Steve Edds, who is advising the City on the matter, also spoke about the loan.

Edds added that failure to pay this debt would have "a significant adverse effect on the city itself" and likely place the water-sewer system into a receivership, as is the case with agencies that declare bankruptcy, which would negatively affect the City of Jackson's credit rating.

Banks asked whether the City had considered raising water and sewer rates, and Ward 4 Councilman De'Keither Stamps—who reluctantly voted to approve the loan—said his concern would be to bring in more customers.

Mayor Lumumba answered that permanent fixes to stabilize the metering and billing system were necessary before even considering raising rates on a faulty system, which could drive more customers away.

"This is the only option," Lumumba said of the loan.

Lumumba: 'We Have a Bad System, Period'

The mayor also accused Banks of consulting with contractors involved in the faulty installation before casting his vote. "Many of the people you consult, Councilman Banks, to be honest, are people who installed the system. That needs to be said," he said.

When Banks asked whether the loan would result in a guaranteed fix of the system, Jackson Public Works Director Bob Miller responded: "This represents my best professional judgment that ... these actions will stabilize this system. The disadvantages of this is it is expensive, it is difficult, and the success is not guaranteed of a fix. But as my professional judgment after 38 years of doing this, (is) that this represents our best option to stabilize the system."

Ward 2 Councilman Melvin Priester Jr. was vocal about his hesitation to approve borrowing the money, but deemed it necessary given the circumstances. "I don't like this option, but nobody likes getting cancer treatment," he said, adding that he would welcome viable alternative options.

Mayor Lumumba emphasized the urgency of the loan, saying it was necessary to stabilize the system. "To call it operable is being gracious," he said of the current water-sewer system. "We have a bad system, period."

In 2013, the City of Jackson entered into a $90-million contract with Siemens that included the installation of new meters throughout the city and make changes to its billing system. Many residents soon began to notice inaccurate and unusually high water bills. Eventually, many people stopped paying their water bills, which forced the City to dip into its general fund to offset the lack of revenue from the water-sewer system. Municipal water-sewer systems, which are supposed to generate revenue, are normally financed through the enterprise fund.

Lumumba warned the council that not moving forward with the loan could thrust the City deeper into debt and possible bankruptcy. "The enterprise fund is critical to the success of our city," he said. "As we look at the stories of cities that have gone into bankruptcy, there is a least common denominator. When [you] lose control of your water, then you lose control of your ability to make revenue and see ... a city that is fiscally successful."

During the Sept. 27 special meeting, the council also voted to temporarily close the Jackson Zoo, starting today, when the City's contract with its current operator, the Jackson Zoological Society, ends.

The closure will allow time for infrastructure improvements and for the incoming operator, ZoOceanarium Group Inc., to get a needed license from the U.S. Department of Agriculture, Special Assistant to the City Attorney James Anderson said. The closure could last for two or three months.

ZoOceanarium Group has not run zoos previously, and doesn't have the needed USDA exhibitor's license that would allow it to own, sell or exhibit animals. Justin Victory of The Clarion-Ledger reported that Robert Blaine, the City's chief administrative officer, said the new zoo operated not having a license was an "oversight" by the City of Jackson and the new operator.

During the zoo's closure period, as the new operator gets its license and the USDA conducts a site visit, the City will switch the zoo's employees to a consultancy basis. They will take care of and feed the animals, administration promised.

"Here's my concern, we've got an entity that has all these employees—and they're employees, they've got benefits (like) health care, don't they?" said Ward 2 Councilman Priester.

"As of the 30th, they will have had benefits," Anderson replied, clarifying that they will no longer have those benefits beginning today. ... It's extremely unlikely they will be able to maintain employees after the 30th."

The City is taking over maintenance of the zoo.

"It's my distinct understanding the Jackson Zoological Society is not capable of taking care of these animals, and that they are basically underwater budget-wise," Anderson said at the Sept. 27 meeting.

The closure and maintenance of the zoo will not add any additional cost to Jackson taxpayers, he said. Under the contract with the Jackson Zoological Society, which has managed the zoo since the 1980s, "the animals and any personal property of the zoo were to be returned to the City of Jackson" once the contract ended, Anderson said.

Earlier this month, though, a Hinds County Chancery Court judge granted the City a temporary restraining order against the Jackson Zoological Society after city officials claimed that the zoo planned to illegally move the animals to the McClain Lodge in Rankin County. At the Sept. 27 meeting, Ward 4 Councilman De'Keither Stamps said he is concerned that closing the zoo and canceling benefits will damage relationships with zoo employees, individuals, corporate partners, organizations and others who have worked with the City to build it over the years.

"Whatever is there took 100 years to get there, so starting from zero, it'll take another 100 years to get back to something else," he said. "If there's a partnership that's adding value ... we definitely need to make sure those connections are there."

Stamps on Employees Losing Benefits: 'These Are Jacksonians'

Councilman Stamps emphasized he is concerned about the employees.

"At the end of the day, these are Jacksonians," Stamps continued. "We may not be of the same race or same party to a lot of degree, and we may disagree on a lot of things, but those are folks who are still in Jackson, serving in Jackson, and volunteering in Jackson when they could have left and gone somewhere else."

"I just don't think this course of action that we're going down—I think we have to find a better way to do this because I don't know how it's going to end up, because this right here, independent contractors, they're losing their benefits in this transition," he said. "The people who are working in the zoo as of next week, they won't have health care. They won't have dental. But it's because a lot of other people outside of their control cannot come together and reason."

"They're not financially solvent enough to continue to provide these things," Mayor Lumumba responded, adding that the City does not "intend to destroy any relationship that is fruitful for the zoo."

The council voted 4-2 for the closure, with Stamps joining Ward 1 Councilman Ashby Foote to vote against the measure.

Foote said he is wary and fears that the decision "has the potential to make the city government look bad."

"I just have apprehension about this move here and having all these laundry list of folks be on a consultant (basis). It just sounds like a hodgepodge type of approach," he said.

Correction: In an earlier version of this story, a subheading mistakenly identified Councilman Stokes as the lone vote against the emergency water-sewer loan; it was Councilman Banks who voted against the loan. We regret the error.