City’s Water Crisis: Between a Rock and a Hard Place 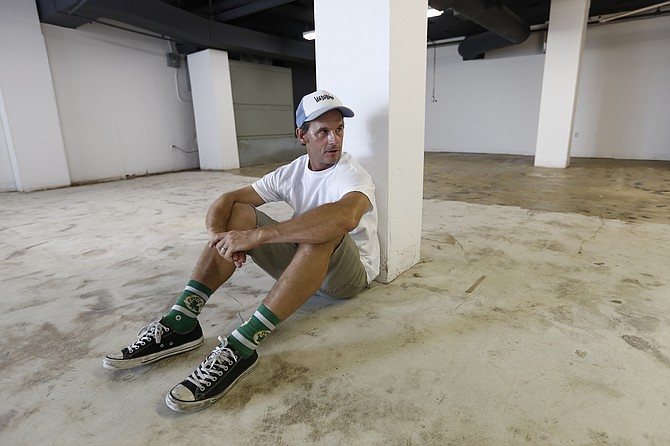 Ron Chane, business owner, is one of many Jackson residents experiencing spikes in his water bills, but that could all change if the City borrows money to fix the water sewer system, which could possibly fix the billing system. Photo by Imani Khayyam

Four years ago, Ron Chane, a local businessman who owns Swell-O-Phonic in Fondren, realized he was having an issue with his home water bill when it jumped from $65 every two months to $200 a month. He went to the Water and Sewer Business Administration office in the Metrocenter Mall to inquire about the rate hike. He was certain he wasn't using that much water.

"I had a young lady that said part of (my) issue is that they're having issues with the meters, and that's why these bills are inflated. I didn't know what she was talking about. She said it's just how the meters are," Chane said in an interview.

In 2013, Mayor Harvey Johnson Jr. signed a contract with Siemens for $90 million to install new water meters and a new billing system for water and sewage services, along with physical upgrades to water and sewer lines and the city's sewage-treatment plants. In the years since, errors in water and sewer billing have plagued Jackson residents, causing shortages in the City's revenue from these services.

Chane said his bills kept being "crazy," so he stopped paying what they said he owed every month. He started to pay his water bill every six weeks and sent in $100 checks, he said. "Just recently, they sent a bill saying the water would be cut off in a week unless I go to a hearing," he said.

Chane went to the city attorney and requested a hearing, but was told he would be lucky if he got an appeal in the next six months. He then returned to Metrocenter to put $200 on his bill to get further ahead, he told the Jackson Free Press.

"The lady pulled up my account, and I told her everything I'm telling you. She could only see back 24 months. She was showing me from that point forward that my bills had been leveled out. I said show me before that, and she said our records don't go back that far," Chane said.

The lack of records for bills that date farther than two years makes customers look like a bunch of slackers, he said. "As I understand, they're not going to cut our water off. They asked me if I'd be willing to settle. I'll settle this for a third of what is due. It's more than I feel like I owe, (but) I don't like having a debt over my head," Chane said.

At its Aug. 20 meeting, the Jackson City Council passed an ordinance to allow administrative hearings for water-and-sewer bill complaints. The City will hire a hearing officer to consider evidence and findings from both customers and the water and sewer business administration manager. The officer will make a recommendation to both parties.

If the customer's claim is valid, the manager will draft a resolution for the council to amend or adopt it as is. If the customer still owes the bill that is due, the council decides whether to discontinue service if the amount is not paid within 10 days following the adoption of the resolution.

"I would be fine with something like that," Chane said of the new appeal process. "Of course, they can't listen to everyone's individual grievance, but if they were basing it on the records they can see of two years, that's not going to tell the story."

Chane said he does not really put too much blame on the City of Jackson as it could have been bad luck of the draw that it wanted to change the water system, but the change brought poor results.

"I don't think they could forecast something like this would happen to the billing when they decided to make a change. Sometimes, even with that effort something can go wrong," he said.

Ward 2 Councilman Melvin Priester Jr. told the Jackson Free Press that the switch to a digital water reading system has caused a ton of problems for the City of Jackson and residents. "Because of these problems, a lot of people weren't getting water bills for some time, and we weren't getting that money. We've had to loan money to the water sewer department from other areas because we weren't collecting enough money."

Priester said Mayor Chokwe A. Lumumba has proposed that the City borrow money to fix the water-billing process, so residents can get their bills on time. The proposal, which he said has its pros and cons, was a part of the Public Works 2020 budget presentation on Aug. 14.

The mayor's proposal could increase the amount of billed and collected revenues, deliver a system with robust capabilities, restore customer confidence and provide a foundation to support future rate increases. But this option is also expensive and difficult, and success is not guaranteed, the presentation states.

"We have a bunch of repairs we have to make to the water sewer system because of the fact that the City is breaking the Environmental Protection Act and the Clean Water Act," Priester said.

The Clean Water Act, passed in 1972, is a federal law that regulates the discharge of pollutants in the country's surface water, such as lakes, rivers and streams. In 2012, the City of Jackson signed a consent decree from the Environmental Protection Agency and the Mississippi Department of Environmental Quality to repair the sewage system in the city. The City violated the Clean Water Act with infractions such as lines bursting, sanitary system overflows and storm water getting into the sewage drainage.

"By virtue of fixing the water-bill stuff, we generate more revenue to be spent on fixing pipes and cleaning water to pay debts. There are some that feel that that is a reasonable way to proceed. There are others that feel it would be a bad idea to borrow money," Priester said.

The Public Works budget for the 2019-2020 fiscal year is $252,961,175, more than a $40-million-dollar decrease from the current year's budget. The biggest question plaguing the budget deliberations is whether the city council will select Lumumba's proposal, he said.

The City borrows money by issuing bonds, which are basically IOUs that taxpayers pay back to bond holders on a set schedule. "The City has these bonds," Priester said. "We've got an interest rate that we have to pay as that's the reason someone is willing to lend me money. The higher the interest rate, the more expensive it is to borrow the money. If I can have a lower interest rate, that's cheaper."

But then bond insurance comes into play, in which a company promises to pay back the loan if the City of Jackson defaults on it, Priester said. He said the bond insurers have been contacting the City to say they are not making enough money to pay their debts, which is dependent upon whether residents pay their water bills.

"We have people like the bond insurers and EPA saying, 'increase what you charge for water and sewer,'" Priester said. "If people can't afford what we're currently charging them, how do we do that? It would increase the number of people that couldn't pay, and that's really problematic."

Priester said Jackson does not necessarily have the population that can afford a big increase in water and sewer rates with a median household income of $30,000. The City of Jackson faces pressure to comply with the EPA and bond insurers because they have the power to take the sewer and water operations away and charge residents what they think is fair, he said.

"As an administration, we are trying to thread the needle by borrowing the funding necessary to make permanent fixes to the system," Priester said.

Ward 6 Councilman Aaron Banks presented the 2020 budget for the City of Jackson to his constituents at the Aug. 29 Ward 6 Town hall in an effort to be more transparent with residents. Banks had an announcement regarding possible changes to the water billing system.

"Here's the decision, either we take a loan out for $7 million," Banks said at the meeting. "Or instead of taking out a loan we raise water and sewer rates."

The loan for $7 million will pay consultants to come in and advise the Public Works department on how to deal with billing issues and set rates, fix the software system, and train people to read the software because those who work in the department now are not trained on that level, Banks told the town-hall audience.

"It's going to begin to address unstranding the bills where at the end of this, hopefully, water-sewer billing administration functions at 100%," Banks said.

His vote is no on both, he said.

"I will vote once you all get real transparency on what happened and why you gotta do it," Banks said.

The council, however, postponed a vote on the borrowing strategy. Priester said Tuesday that he does not know when the council will take up the borrowing approach, but a special hearing to vote on the millage rate is Thursday, Sept. 5, at 6 p.m. Those results will affect whether or not the City will vote to borrow, he said, and the council will decide no later than Sept. 15, he deadline for a balanced budget. Without a unanimous vote, they cannot move forward. However, if the loan is approved, residents will have to pay it back.

Resident Emon Thompson said he appreciates Banks' honesty because it does not do the City any good if they hide stuff. Of the options, he said it would be easier for the City to take out a loan because raising water rates is not a good idea with the current billing system.

"You're not doing a quality job. Once you get your act together, then let's talk about a raise in the fees," Thompson said about the City. He saw a triple increase in his water bill during the beginning stages of the new meter system, but he thought it had something to do with his pool. He said he stopped paying his bill until the water-sewer business administration straightened everything out. "If you miss one payment and are late, then they demand you pay everything upfront. They make us suffer because of decisions they made. We didn't have anything to do with this," he said.

Priester said an easy option would be to try to hang on for another year, but it would not be acceptable to the EPA or the City's bond insurers. "As I sit here in 2019, (thinking) how I pay for our water sewer bill with a population that is thinning and has less financial wherewithal to increase rates. Your hands are tied by these rules," he said.

"We could borrow this money or not. We could raise rates. I don't think that would be palpable to the City of Jackson," Priester said. "We think about the citizens. People just want to get a water that is reasonable, get it every month and keep it moving."