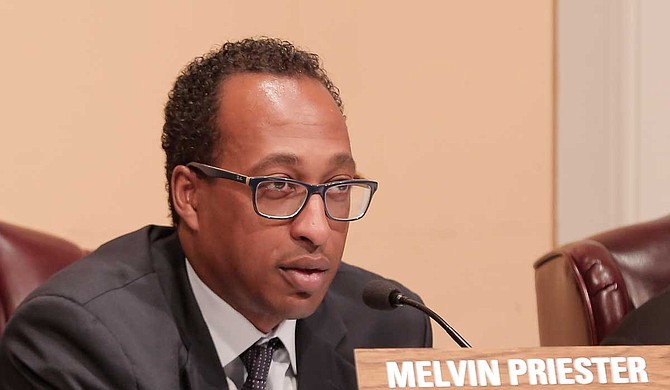 By keeping the overall millage rate the same, the City is setting a cap on what can be taken out of the general fund as its debts have increased. Ward 2 Councilman Melvin Priester Jr. said that the vote is, in part, a way to safeguard the general revenue fund, but only in the short term. Photo by Imani Khayyam

Amid an ongoing lawsuit stemming from concerns over Jackson's water-sewer system, the Jackson City Council voted Thursday evening to not change the overall millage rate for fiscal year 2020. The millage rate, which generates a large portion of the property tax revenue to fund public services, will remain at 63.03 mills.

In 2013, the City of Jackson entered into a $90-million contract with Siemens Inc. to install new water meters and implement changes to its water-sewer billing system. Resulting problems with the system have thrown the water-sewage system into a state of crisis, with many residents reporting inaccurate—and unusually high—water bills, often leaving them unpaid.

Unpaid bills have interrupted the City's revenue stream and forced it to finance its water-sewer services by dipping into its general fund, which is typically reserved for financing non-revenue-generating services, such as the fire department, human and cultural services, and more.

"This is not how this is supposed to work," Ward 2 Councilman Melvin Priester Jr. told the Jackson Free Press today. "In a city that is financially healthy, the water department bills out enough money to pay for its cost ... but because of the financial straits we are in, we have been taking from other areas to pay for this. We shouldn't be doing that and we are trying to avoid doing that."

By keeping the overall millage rate the same, the City is setting a cap on what can be taken out of the general fund as its debts have increased. Priester said that the vote is, in part, a way to safeguard the general revenue fund, but only in the short term.

At an Aug. 12 Finance Committee meeting, the City announced that its debt-service payments will increase by 24 percent during the 2020 fiscal year, from $11,831,746 in fiscal-year 2019 to $14,657,476. This debt, which is unrelated to the water-sewer crisis, originates from money the City borrowed to finance various projects, including roads and the construction of the Jackson Convention Complex.

For the 2020 fiscal year, the City is able to pull from a one-time debt-service-related fund balance. As a result, the general-revenue fund millage has increased slightly, and the overall millage rate has remained the same. But once the one-time debt repayment balance runs out, the City will once again turn to the general-revenue fund to pay for any water-related and other debts.

"We have water-sewer hanging over us like a cloud, because we have to give those guys money from the general fund. We are already stretched super thin in light of this 24-percent debt service," Priester told the Jackson Free Press.

In order to keep the overall millage rate the same, the City made small cuts throughout the individual funds. The general-revenue fund millage rate increased slightly. The disability and relief fund for firemen and policemen dropped by 5.61% and the public-library system fund, which already has the lowest millage rate, dropped by 2.9%.

Although council members did not discuss a breakdown of the changes in individual funds during the meeting, Ward 1 Councilman Ashby Foote expressed concerns about the "top priority" rehabilitation of the Eudora Welty and Charles Tisdale libraries, both in north Jackson. Mayor Chokwe A. Lumumba said that they were concerns of his administration.

But Ward 6 Councilman Aaron Banks emphasized the need for a more inclusive approach to supporting the city's libraries, pointing to a need in predominantly black south Jackson, where many residents live in poverty.

"I appreciate the mayor for prioritizing libraries. You know in our communities, one of the only safe havens for our kids is the library," Banks said, citing access to free WiFi as a further example of how local libraries serve their patrons. "A good priority (would be) to focus not just on Eudora Welty and Tisdale (libraries), but I take this time to say also on the ones in south Jackson as well," he added.

On Sept. 15, the city council will vote on its 2020 fiscal-year balanced budget, which will determine municipal spending for the year and whether Jackson will borrow a loan to pay for its water debts.