Jackson Attorney with COVID: ‘A False Sense of Protection Here’ 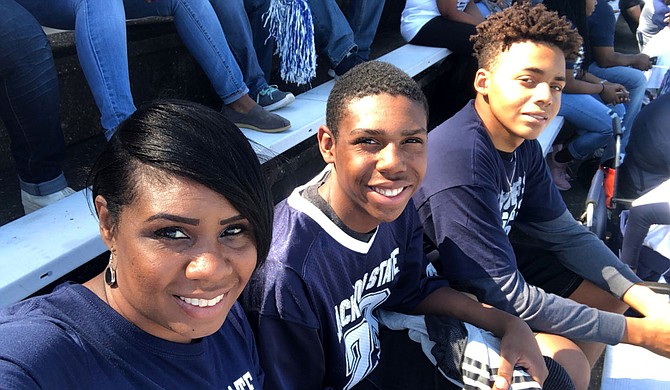 Jackson attorney Felisha Sheppard, pictured here with her sons Aaron Evans and Camry Watkins, shared her positive COVID-19 diagnosis in the hope that it could help put a face on the disease and support others who are navigating the pandemic. Photo courtesy Felisha Sheppard.

Felisha Sheppard had been mourning the loss of a close friend in the weeks leading up to the Mississippi primary election on March 10. She had remained by her friend and former Clarion-Ledger columnist Eric Stringfellow's side at the hospital after doctors diagnosed him with cancer in January. When Stringfellow passed in February, Sheppard did not leave her Jackson home for weeks.

When Sheppard did go out the week of March 8, Jackson was buzzing with events. The Jackson native and attorney  attended an election-watch party and Toastmaster's Club contest, among other local gatherings.

Sheppard, who lives alone, started experiencing congestion a week later on a Sunday. She chalked it up to a minor cold. She began to lose her sense of taste and smell, which she suspected was due to the cold. "I really convinced myself for five or six days that is exactly what that was. Obviously, I had no fever, no shortness of breath, any other requirements for being tested for COVID," she told the Jackson Free Press during an interview in early April.

Sheppard began to worry after watching a segment of "CNN Tonight with Don Lemon" that Friday evening, in mid-March. A congressman appeared on the show and revealed that he had tested positive for the novel coronavirus. His only symptoms were loss of taste and smell.

Sheppard confided in a friend, who told her to download the C Spire Health app the following day. It took about three minutes for Sheppard to submit her symptoms through the app—she could only check one, so she checked loss and taste of smell—and make contact with a nurse.

The night before, Sheppard had felt hot under her blanket, despite the fact that her home was at a relatively low temperature. When the nurse called Sheppard within five minutes of her submitting her symptoms, Sheppard mentioned the night sweats. Given the lack of widespread testing throughout the nation and the prioritization of people showing more severe symptoms, Sheppard expected the nurse to turn her away.

"That's enough to consider that a fever," the nurse answered instead, and then set up an appointment the next day for Sheppard to get a COVID-19 test.

At the Mississippi State Fairgrounds, health professionals conducted a swab test on an energetic, healthy-looking Sheppard, who couldn't believe that she had the virus.

On April 1, Sheppard learned that she had tested positive for the novel coronavirus. The diagnosis prompted her to revisit some of her earlier symptoms, ones that she had been ignoring because they seemed minor: congestion, loss of taste and smell.

She also began to experience headaches after her diagnosis.

Sheppard is now going public with her story to urge other Mississippians to exercise precautions, practice social distancing and, above all, not assume that they or others do not have the disease simply because they are asymptomatic or have mild symptoms.

"I think people are expecting to see symptoms in someone, maybe even coughing or just looking sick," Sheppard said in the interview. "Obviously, I could have and still could be carrying the virus and not have looked sick."

Sheppard said she had continued to go to the grocery store to stock up on supplies before her diagnosis, because she had no reason to believe she may be a carrier.

It wasn't until the day she learned she had the virus, on April 1, that Gov. Tate Reeves signed a shelter-in-place order, limiting interactions that could cause the spread of the debilitating and often-deadly novel coronavirus.

'A False Sense of Protection'

Since diagnosing its first COVID-19 positive patient on March 11, Mississippi had seen 6,342 cases of the novel coronavirus as reported April 28, when this story went to press. Of those people, 229 have died, the vast majority of whom are black.

In Hinds County, 435 people had tested positive, and seven died. State and private health providers had administered tests to 64,412 Mississippians so far—0.02% of the state's population of 2,976,149.

Despite the mounting rates of infection, for weeks Mississippi saw the absence of a state-wide shelter-in-place policy to prevent the spread of the virus. As a result, municipalities throughout the state employed differing approaches to mitigate infection.

In Jackson, Mayor Chokwe A.  Lumumba implemented some of the strictest measures. By March 18, the mayor had banned gatherings of 10 or more people, required non-essential City employees to work remotely, ordered bars to close, and limited restaurant operations to delivery, take-out or drive-thru.

But in nearby Flowood, a suburb of Jackson and where the governor lives in addition to the Governor's Mansion, residents continued to dine inside restaurants, go to barbershops, nail salons and gyms as late as March 31.

"I absolutely do not believe that people are taking it as seriously as they should, and that's based on my personal relationships," Sheppard, who has been self-isolating since her April 1 diagnosis, said on April 7. She pointed to friends who were continuing to gather at one another's homes or businesses.

The reality and weight of the pandemic has still not fully settled in with most Mississippians, she says. In her own social circles, Sheppard has observed people not taking enough precautionary measures.

A COVID-19 hotspot along with other cities like New York and Seattle, New Orleans had seen 27,068 cases by April 27. That city has experienced devastating losses from the virus, with the death toll at 1,697 and still climbing.

"I think we have a false sense of protection here, (like) we don't get any type of diseases like that. ... That simply is not the case," Sheppard said. "We don't have to wait until people from Louisiana or anywhere else to come inside of Mississippi or to come this way. We have a lot of numbers undetected right now."

Sheppard emphasized the urgency of self-isolation and social distancing, which are critical because it is impossible to tell who has the virus, given that so many people who have and spread COVID-19 to others do not show symptoms.   Last month, a study based on data from China revealed that asymptomatic carriers or people with very mild COVID-19 symptoms were responsible for causing nearly 80% of new infections.

"I just really feel like it is in a lot of places that we don't recognize. From just going to the grocery, just going to your mailbox that you share," Sheppard said. "I thought about my business office today—we all go to the same mailbox. We all touch the same doors and things like that."

"I don't know where I could have picked it up because the possibilities are endless," Sheppard said.

Sheppard's 21-year-old son Camry has sickle-cell anemia. She has been self-isolating from him for fear that the virus could wreak havoc on his already-fragile health. In Mississippi, as with the rest of the nation, people with underlying health conditions account for the majority of COVID-19-related complications and deaths.

Sheppard worries for her son because he still works at Pizza Hut several days a week. He recently notified Sheppard that he took time off from work, but the mother and son are discussing the possibility of him resigning for the sake of his safety.

"I'm trying to get him to understand you don't know where your coworkers have been, so it's not enough to just have a mask and gloves on at work. You're only accountable for where you have been," she said.

She is also concerned for essential workers, like health-care providers and grocery-store clerks, who are continuing to work amid the dangerous pandemic—and often without access to protective gear.

"That's the real fear—those who are essential workers, and who are still having to go to the hospital every day to work. I mean, those numbers are climbing with health-care workers, too," she said.

"People are spreading without being symptomatic. And that is the fear. That should be the fear."

After Diagnosis, A Threat

Within two days of her diagnosis, the Mississippi State Department of Health reached out to Sheppard for a post-diagnosis survey. It instructed her to self-quarantine for 14 days and asked her with whom she had come into contact, so that those people could be referred for testing. The health department did not prescribe her any medication, but Sheppard's own doctor put her on the oral antibiotic Z-Mycin.

The health department also sent Sheppard a letter signed by Paul Dyers, the state epidemiologist, notifying her that she could be fined up to $5,000, charged with a felony and imprisoned for not obeying a state health official's orders regarding a life-threatening disease.

Sheppard has a good relationship with her own doctor—she does his legal work, he sees her clients—but is concerned that many Mississippians cannot easily access health-care professionals due to lack of insurance. She suspects this is also a reason why so many black people in the state, who are more likely to be uninsured, are dying from the disease.

"Maybe blacks are having it at a higher rate than others mainly ... because by the time we do acknowledge there is a health problem or consider going anywhere, it's probably at a stage much greater, much further than other people who are able to access health-care providers much earlier," Sheppard said.

Although state health officials are instructing people to call their doctor if they show symptoms, not all Mississippians can do that, Sheppard said.

"You're talking about a minority group that doesn't really have access to just calling doctors," the lawyer pointed out.

She wishes that the requirements for accessing testing would expand so that more people with milder symptoms, like herself, or no symptoms at all, can learn their diagnoses earlier, thereby mitigating the risk of passing the disease to others.

Going Public: Worth It

Sheppard debated whether or not to go public with her story. She weighed all of the different ways that talking about her experience could affect her.

She had a falling out with a friend, who refused to self-isolate and continued to partake in large gatherings. The friend was angry with Sheppard for continuing to talk about the virus, and Sheppard was hurt that the friend turned a blind eye to her reality and the reality of so many Mississippians whose lives COVID-19 has altered.

Nevertheless, Sheppard decided that it was important to share her experiences with others.

"I hope that what I put out just added a face so people can realize that they do know someone who has it," she said.

Going public was worth it, and much of the fears she experienced earlier are gone, now that she is almost fully recovered.

"The fear of coming into contact with it, I will no longer have," she said.