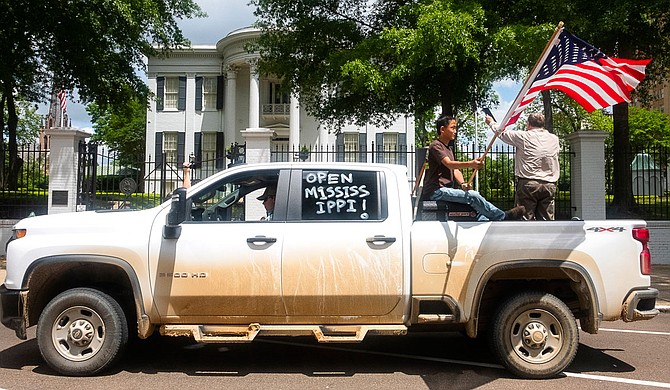 Protesters convened outside the Governor’s Mansion in downtown Jackson, Mississippi on April 25, 2020, to demand that Gov. Tate Reeves fully re-open the state during the novel coronavirus crisis. Photo by Seyma Bayram

Dozens of cars bearing hand-painted messages and signs, American flags, the Mississippi state flag, the Gadsden “Don’t Tread on Me” flag and other insignia, encircled the Governor’s Mansion in downtown Jackson Saturday, April 25, to demand that Gov. Tate Reeves fully re-open the state amid the COVID-19 global pandemic.

The “Reopen Mississippi” protest came just two days before Reeves’ order to partially reopen Mississippi went into effect. Similar protests have occurred throughout the rest of the country, notably in Ohio, Texas and Wisconsin. Reeves’ new order, effective until May 11, allows some non-essential businesses, such as retail, to reopen in Mississippi. The governor is limiting gatherings to 10 or fewer people and encouraging Mississippians to stay at home as much as they can.

Reopen Mississippi, the group that organized the protest, questions the legitimacy of the pandemic. Protesters and the group’s spokespeople denounced the state's approach to dealing with the viral outbreak, as well the struggling economy amid business closures. They described Reeves’ April 1 shelter-in-place order and other measures to curb the spread of infection as infringements on their constitutional rights and their God-given right to work.

Don Hartness, one of the lead organizers of the protest who recently moved from Rankin County to Ellisville, Miss., emphasized what several other attendees had told the Jackson Free Press: that the decision to practice social distancing should be left up to individuals and that all businesses should fully reopen.

“We want the ability to 100 percent open and let the American people and Mississippians make the choice if you want to go into that business,” Hartness said. “It should be up to the people, it should be up to the restaurant people, the catering companies—anybody that owns a business—it ought to be up to you.”

“When one business goes down, do you know how many other businesses are affected?” Hartness asked in a call-and-response to the protesters. A chorus of male and female voices shouted back “all of them!” and “everyone!”

“Everyone of them, from the power company to gas company to insurance to medical—everything is related to that business,” he said. “When they go down, it has a domino effect. And what the politicians don’t understand, they’re still drawing a paycheck. A lot of us have reduced paychecks and (are) lucky to have a job.”

Mississippi has seen 6,094 number of confirmed cases of COVID-19 since reports emerged on March 11 of the first COVID-19 diagnosis in the state. At press time, the Mississippi State Department of Health had confirmed 229 deaths due to the virus, many of them—61%—black people.

As the pandemic continues to ravage lives across the country and state, it has had profoundly devastating consequences on the economy. Among the hardest hit are small businesses and minority-owned businesses, who have been unable to access their share of a $2.2 trillion governmental relief package. At the same time, millions of Americans, including Mississippi residents, have struggled to secure unemployment benefits since they were laid off or furloughed from their jobs.

A recent report from Main Street America found that 62% of small businesses in Mississippi were at risk of permanent closure within five months. The same report noted that, nationally, small businesses employ more than 35 million Americans. Unless the federal government intervenes, unemployment rates could climb to even higher rates, the report warned.

More than half of Mississippi households will not be able to survive without an income for more than three months, a Prosperity Now Asset and Opportunities Scorecard found. Racial disparities in liquid asset poverty also exist: 72% of black households in Mississippi do not have enough cash to survive economic disruption.

George Johnson, a low-voltage electrician who participated in Saturday’s protest, told the Jackson Free Press that he had recently lost his job. He felt that the government’s reaction to COVID-19 was overblown.

“I’m unemployed because of this overreaction by our local government. It’s time to reopen our economy back up because there’s a lot more people suffering from the lack of being able to provide for their families than this so-called pandemic that we keep hearing about,” Johnson said.

“I’ve been unemployed for a month and a half now, and I’m still waiting on unemployment, I haven’t gotten any unemployment. There’s a lot of messed-up stuff that’s going on in this country that needs to be put to a stop,” he said.

Johnson added that “it should be up to the individual to decide on whether on how they should protect themselves, not be forced by the barrel of a gun of government control.”

The Jackson Free Press asked him about the public-health risks associated with COVID-19, including the risk of spreading the disease to others.

“That’s just a risk we have to take in a free society. In a free society, there’s risk you have to take. It’s up to you as an individual to decide on how you should protect yourself and which is the best precaution to do so and not force it upon everybody,” Johnson responded.

“Because when you force it upon everybody, that’s what you call communism and totalitarianism, and that’s what we’re seeing today,” he added.

Pam Powell, another protester who had traveled to Jackson from her residence in Waynesboro, also downplayed the virus’ impact and the risk of spreading the disease.

“Normally healthy people are not quarantined, usually sick people are quarantined. And there’s no reason for businesses to be shut down,” she said.

The Jackson Free Press asked Powell whether she had considered the fact that many carriers of COVID-19 are asymptomatic.

“I really believe a lot of people in South Mississippi have already had it. And most people do not die with it, so there’s only like 0.05 percent change of dying with it,” Powell responded.

Like others who spoke to the Jackson Free Press, Carriere resident Wendy Lewis expressed concerns about the impact of the pandemic on local economies. “I’m here because I’m seeing so many small businesses in my county, which is Pearl River, suffer, foreclosed,” she said. “Without those people, our economy is going to be going under even further than it already is. All businesses are essential, all livelihoods are essential and need to be restored.”

Jackson resident, and long-time conservative talk-radio host, Kim Wade questioned the legitimacy of the state health department’s data on COVID-19 cases and deaths. “The numbers that have not panned out based on what officials have said,” Wade said.

“Now that we see the damage that it’s causing, we just can’t continue on simply because some doctor or so-called expert has some numbers. They have better odds and numbers on the back of a lottery ticket,” he said.

The Jackson Free Press asked whether Wade and others had considered placing pressure on the government to do more in terms of unemployment benefits or disaster relief, including for small businesses.

“No, they don’t need to do that,” responded Wade, who was active in the Mississippi Tea Party in recent years. “We can’t continue to subsidize forever. Let the people go back to work, period. The only money that the government has is the money that they take from us. And if we’re not working, eventually the whole thing stops,” he said.

Read the JFP’s coverage of COVID-19 at jacksonfreepress.com/covid19. Email Seyma Bayram at [email protected] and follow her on Twitter at @seymabayram0.