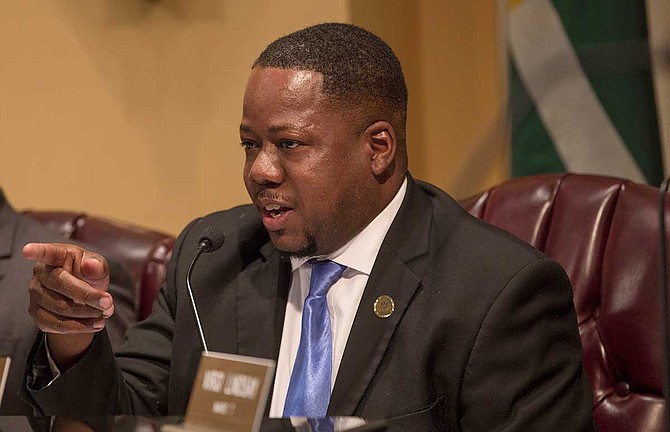 As Congress deliberates on disbursing a second round of economic relief to small businesses and individuals suffering in the wake of COVID-19, Ward 6 Jackson City Councilman Aaron Banks expressed concerns about how majority-black communities and black-owned businesses were left out of the first round. File Photo by Imani Khayyam

The findings come amid calls for Congress to replenish funding for the Payroll Protection Program and Emergency Injury Disaster Loan through the CARES Act. While Congress deliberates on the next round of stimulus funds, the National Urban League is lobbying the federal government to ensure that subsequent relief efforts include minority-owned small businesses and unbanked business owners, among other populations that were largely left out of the first round of the CARES Act.

Banks’ constituents live in predominantly black south Jackson, with many low-income neighborhoods. Majority-black communities and businesses, he pointed out, are often the last to find out about how to apply for relief opportunities.

“We’re missing out. One of the complaints was the funneling of the information … and the times and deadlines,” Banks said.

By the time business owners and residents in his ward and elsewhere in Jackson had found out about loans and grants, the money had already tapped out, Banks said. In addition to the confusing messaging from state and federal governments, many of his constituents do not have access to the internet or basic cable service, thus worsening the communication gap.

Despite the fact that small businesses across the country have been unable to access the $349 billion in emergency, taxpayer-backed loans through the Payroll Protection Plan, at least 75 publicly traded corporations have secured a combined $300 million in PPP loans, an Associated Press investigation revealed. Some of those corporations have market values exceeding $100 million and employ thousands of workers.

Big chain restaurants like Ruth’s Chris Steakhouse and Shake Shack received $20 million and $10 million in government loans meant for small businesses, respectively, as have other major corporations. To date, the Donald Trump administration has not released names of all companies that have benefited from governmental relief.

Shake Shack announced on April 21 that it is returning its $10 million loan to the fund.

Meanwhile, the economic fall-out of the pandemic continues to wreak havoc on workers and small business owners in Mississippi, where more than half of residents do not have enough cash to survive without an income for more than three months. As is the case frequently during times of crisis, communities of color are bearing the brunt of the negative consequences of the pandemic.

COVID-19 has not only disproportionately harmed the health of black Mississippians—they accounted for 64% of COVID-19 deaths in the state, as of April 20, despite representing 38% of the state population—but it has also exposed the extent of the racial wealth gap and financial vulnerability of African American communities. Nearly three out of four black Mississippians cannot survive beyond three months without an income.

Many lower-income workers do not use banks or file taxes. Lower-income small-business owners and black-owned businesses may not have relationships with traditional private banks, which proved to be effective ways to get SBA-backed loans this past month. Repeated studies have shown that black business owners struggle significantly more to secure loans than white applicants.

Another area of concern for Banks, and one that Ward 2 Councilman Melvin Priester Jr. also shared with the Jackson Free Press last month, is how unbanked people, those who have not filed taxes and homeless individuals will receive their stimulus checks.

“That is a big concern,” Banks said. “There is a population that has a huge disparity because they don’t do banking like someone who can afford to do, and so I am concerned about our percentage of the population being missed.”

The IRS is encouraging non-filers to enter their information directly at IRS.gov. Non-filers with children may be eligible for $500 additional stimulus money per child, but the site showed a deadline of April 22 at 12:00 p.m. Eastern (11:00 a.m. Central) for those filers to update their info.

A 2017 FDIC National Survey of Unbanked and Underbanked Households found that 15.8% of Mississippi households are not banked, meaning that they do not have a checking or savings account. Another 38% of households in the state did not have mainstream credit, such as car or student loans, credit cards, a home equity loan, a home mortgage or other lines of credit. Across the country, the racial disparities were significant: More than one out of every three black and Hispanic households reported not having mainstream credit, compared to fewer than one in six white households.

Relief Efforts In Wake of COVID-19

Small business owners in Jackson and throughout the country are struggling to access governmental relief in the wake of the pandemic. In addition to the lengthy waiting period for approval, the Payroll Protection Plan and Economic Injury Disaster Loans, or EIDL, that the federal government had promised every small business owner, beginning on March 27, swiftly ran out. By April 9, the Small Business Administration began to notify applicants approved for EIDL loans that they could secure no more than $15,000 in loans, and by April 16, the SBA temporarily halted processing PPP applications.

On the afternoon of April 20, the U.S. Chamber of Commerce opened an application for a $5,000 grant for small businesses in Jackson and elsewhere in Mississippi through the Save Small Business Fund. The philanthropic and corporate-backed fund aims to support small businesses that have three to 20 employees and are located in zip codes that are disproportionately suffering from the economic fall-out from COVID-19 pandemic. But applications for the short-term grant had already closed by the following morning.

As lawmakers convene around disbursing an additional round of PPP funds, the Mississippi Secretary of State Office is urging Mississippi small business owners who have not yet applied for relief to prepare their PPP applications. If the bill passes through the Senate, the House could vote on it as early as Thursday, April 23.

Advocates and small-business owners in the state have pointed to several blind spots and restrictions in the CARES Act relief package. Business owners and lawmakers are criticizing the requirement that small-business owners obtain SBA loans through private banks, which has resulted in some loan applicants bringing lawsuits against big banks around the country.

Despite the heightened risks the pandemic presents for non-white-owned businesses, Congress allocated less than 1% of the $2.2 trillion stimulus package to the Minority Business Development Agency, which links minority-owned businesses to loan, grant and other relief opportunities.

Small businesses employ more than 35.7 million people across the country, the Main Street Association report noted, so unemployment rates will continue to climb to even steeper levels unless the federal government intervenes.

In its report, the association recommended several policy solutions, including but not limited to more robust technical support for local financial institutions and chambers of commerce as they reach out to businesses in need and ensuring that subsequent stimulus funding reaches businesses with fewer than 20 employees.

“These are the businesses that make up the bulk of jobs and are at the heart of communities across America,” the association stated.

Email City reporter at [email protected] and follow her on Twitter at @SeymaBayram0. Read the JFP's full coverage of the COVID-19 outbreak in Mississippi at jacksonfreepress.com/covid19.

Correction: Due to an editing mistake, this story originally stated that all non-filers of tax returns must meet an April 22, 2020 deadline to file; the IRS site says that non-filers who want to apply for an additional $500 per child must register by 11:00 a.m. Central time on April 22.