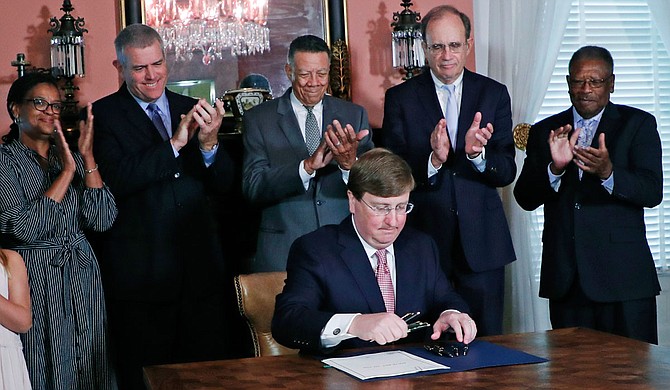 Gov. Tate Reeves is spinning. He is grasping at any straw he thinks can divert attention away from his abysmal leadership during the COVID-19 crisis in Mississippi. His choices are more focused on Trump-approved politics than on safety risks that the JFP has warned about every step of the way.

We told you from the beginning of COVID-19 that Reeves was waiting too long to shut down commerce and that his tardiness would prevent a real flattening of the curve in our state. That, in turn, would leave our health-care system weakened and in reactive mode and, to hear the experts tell it, cause a more severe second wave—if the first one ever finished. Which it didn't.

We knew this from listening to experts, even if their truths were inconvenient and meant we would have to sacrifice pleasures like dining out, getting a new tattoo or haircut, or going to parties or bars until this pandemic had actually subsided.

Then, Reeves finally signed an executive order to require some distancing on March 24. But the order was confusing and clearly superseded at least some of the patchwork of efforts mayors were attempting around Mississippi to fill the leadership void Reeves had left gaping.

We reported that mess of an order, and Reeves' deputies set out to discredit Nick Judin's reporting on it—which, let's be honest, was simply based on reading and comprehending the entire order and pointing out its conflicts. They even directed some vicious and false tweets at me for supposedly putting Nick up to ... good reporting.

But even that order and later ones to clarify it contained weasley safety precautions, especially about masks. Under intense pressure, Reeves finally issued a shelter-at-home order two days before he quietly proclaimed the appalling Confederate Heritage Month on April 3.

Plus, Reeves quickly played politics over declaring gun stores and religious gatherings "essential," and joined into attacks on Black churches, such as in Greenville, that tried to save people's lives by not allowing groups to gather, even as the State knew Black Mississippians were being hit disproportionately. (Media had to demand virus race details for weeks before we got them, finally confirming who readers had told us were hit hardest.)

Religious gatherings, including in South Korea, have been treacherous hotspots for COVID-19. Had Reeves come across as forceful and passionate about masks and avoiding all group gatherings as he did about protecting the constitutional rights and desires of gun enthusiasts; the demands of churches to physically open during a pandemic; his self-congratulation on conservative radio for using the pandemic to interrupt abortion rights; and for reinforcing the right to not wear a mask—we might not be where we are now.

If Reeves had been at least as adamant about the need to wear masks, including mandating them, it is clear that this pandemic wouldn't be so out of control here. Smarter and less partisan choices in other states and nations showed faster recoveries—while Mississippi has only gotten worse. We're still in the first, growing wave.

Reeves' logic, of course, was designed to appeal to his key voters in Mississippi, who don't even include all Republicans. He thinks his base wants the Mississippi flag to remain and loves seeing safety masks weaponized into political wedge issues, even during a pandemic where a bipartisan reckoning of racist symbols is underway.

I think his base wants to live, loves granny and needs leadership to help them.

There was and is a national campaign underway to divide Americans along partisan lines during the pandemic, convincing some that COVID-19 safety needs like masks and distancing were part of some liberal hoax to make them give up their rights not to infect others and be killed themselves. Reeves plays along at our peril.

Of course, in April, he was pandering to the "Reopen Mississippi" protesters who rejected masks to get back at liberals, taking its cues from all the false advice and minimization of the virus (you know, it's just like the flu) Trump and his FOX buddies were throwing out. They protested outside the Governor's Mansion, with most demonstrators defiantly not wearing masks and calling the whole thing a hoax—but he's not trying to blame those protesters now.

Now, of course, Reeves is trying to scapegoat "liberal media" for reporting only that people got infected at Memorial Day BBQs (after he re-opened Mississippi) and not his new shtick that Black Lives Matter protests in Mississippi worsened COVID-19, despite research to the contrary.

Let's be clear: No media ever said only big BBQs caused the spread, although they surely helped due to his weak statewide safety regulations. And media, from local to national, reported dangers of BLM protests—a major reason the vast majority of those protesters wore masks for hours in the sun while demanding that white Americans stop treating Black lives as disposable.

This is all desperate hand-waving on Reeves' part, and it won't work. We've watched and heard from Mississippians of every political stripe who get it. That is, a worldwide pandemic is not a partisan game and shouldn't be treated like one. It is past time for real leaders to work to save every life possible through making difficult decisions, wearing the damn masks in public and, yes, mandating the wisest safety precautions, as State Health Officer Dr.Thomas Dobbs now wants to happen. Good leaders call on others to be responsible and, no, not everyone will like you for it.

That's OK. It's part of leadership.

Reeves, though, is a follower, showing no propensity to lead, and the times are leaving him behind.

Regardless of your politics, most agree that if there's anything government ought to embrace at a minimum, it's doing everything possible to keep people alive during a dangerous contagion event.

Real leaders know nothing—business, economy, schools, health care—will continue to work if we don't put aside selfishness and political division and wallop the damn curve together. This is a time when government, and good leaders, will act at their smartest and most compassionate.

The governor has failed the leadership test royally to date, and blaming media, protesters and whomever else will not change that. Reeves must shelve politics, put on his big-boy drawers and lead this state to safety.  That's it. That's the job. Own it.

Editor's note: Due to editing for space, the print version of this combined information on Tate Reeves' original March 24 executive order and his April 1 shelter-at-home order. The deleted text is back in the above text.