Governor Does About-Face, Issues Statewide ‘Shelter In Place’ For Mississippi 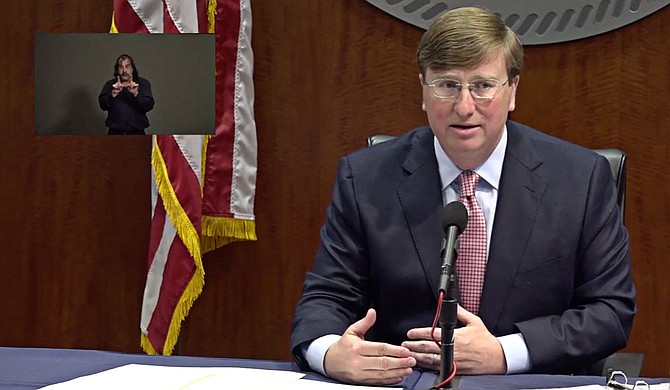 Gov. Tate Reeves announced a statewide shelter in place order beginning Friday, April 3 at 5 p.m. and ending April 20 at 8 a.m. At a press conference near the Capitol, the governor clarified the provisions of the order and assured Mississippians that waiting had been the harder, more data-driven choice. Photo courtesy State of Mississippi

In an overnight about-face, Gov. Tate Reeves signed a long-awaited executive order today closing non-essential businesses and directing all Mississippians to shelter at home between Friday, April 3, and Monday, April 20, to help lessen the spread of the novel coronavirus. The order directs all Mississippians to remain in their place of residence for the duration of the order, except for essential activities, including travel for medical purposes, to procure food or adequate shelter, or to work at “essential businesses” that Reeves included in his original executive order last week.

The new order shuts down all non-essential businesses, a category that Reeves’ previous executive order had largely left to local governments to deal with, causing an inconsistent approach across the state and between cities and the counties surrounding them. He now clarifies that “fitness and exercise gyms, dance studios, clubs, tattoo parlors, spas, salons, barber shops, and other similar personal care and grooming facilities” are all non-essential and must close by Friday at 5 p.m.

Reeves, who struck a less-defiant and more conciliatory tone today, made it clear that non-essential businesses that must close include clothing stores, related retail outlets and shopping centers, which had to date been left in a gray area that local officials struggled to resolve. Non-essential businesses may continue “minimum operations,” meaning limited activity necessary to protect the physical security of the businesses, continue payroll and health insurance, and work-from-home activities. But they may not remain open to the public.

The order also fully overrides Reeves’ previous allowance for dine-in services at restaurants provided only 10 people remain in the building at once. Now, restaurants in Mississippi may only offer drive-thru, curbside pickup, delivery or else close entirely.

Outbreaks in highly vulnerable populations are part of the urgency necessitating a full state lockdown, State Health Officer Dr. Thomas Dobbs said. “One of the things that's become most worrisome is we've seen an expansion in the number of cases in nursing homes,” he said. “If we think about what the purpose of a shelter-in-place order is, it's to slow things down, to give the system an opportunity to get extra capacity to deal with the increased demand, and part of that's going to be the health-care system.” 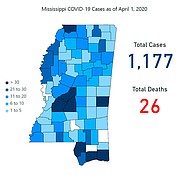 Yesterday, Reeves announced a shelter-in-place order for just one county, Lauderdale, which had fewer cases than a number of other counties and no deaths to date. But it had suffered a swift increase in cases and an outbreak in a nursing home that the State refused to name. Many Mississippians reacted negatively about the selection of just one county for a strict order, however, while delaying a statewide decree with consistent messaging.

But the governor insisted today that his decision to wait so long to issue a shelter-in-place order was proactive, not reactive—and not political. Until days ago, President Donald Trump had been pushing to re-open businesses and commerce by Easter, which he backed down from on Sunday. And Reeves and staff had deflected some of the criticism of his original executive order as coming from liberals and Democrats, even as many Mississippians across political lines have called for a consistent statewide policy.

“To be honest with you, if I was going to make the politically easy decision, I would have issued an order such as this weeks and weeks ago,” Reeves said today. “That was the easy decision politically because there were lots of people calling on lots of different political leaders to make that decision.” But the “data-driven” path, the governor stressed, led the State here today, revealing that it was now the right time in order to ensure that the health-care system not be overwhelmed with an increasing number of cases.

On that note, Dr. Dobbs assured the press that the state had “plenty” of ventilators for Mississippians as of today, but explained that it was the coming weeks that potentially threatened the available supply. He declined to offer an actual number of available ventilators, indicating that the numbers might alarm the public.

"It changes so quickly, it’s not something we want to publish,” Dobbs said today. “And it’s also something people would freak out if they were looking and seeing, ‘Oh, it’s gone up 10 percent or down 10 percent.’"

Evictions Frozen for Now, but Must Pay Mortgages and Rent on Time

The question-and-answer portion of the press conference touched on a number of issues the original executive order had raised, providing clarity for many lingering questions. Reeves’ Wednesday afternoon order establishes a two-week eviction freeze statewide, but Reeves told this reporter that he did not anticipate any form of rent or mortgage freeze.

“There has been no conversation about a rent freeze, and I don't anticipate there will be,” the governor answered. Reeves pointed to expanded unemployment opportunities in the CARES Act, which President Donald Trump recently signed into law, as evidence that Mississippians would be provided for in the tough times ahead.

Reeves admitted that he was not sure if the entirety of the CARES Act would apply to the state of Mississippi. The Act includes a number of provisions that radically differ from the typical operations of unemployment, especially in a state like Mississippi, with its relatively strict social welfare standards.

For example, the CARES Act extends unemployment benefits to individuals who quit their job strictly because of COVID-19. But usually, as Reeves explained, “to apply to receive benefits of unemployment insurance, state law is that you lose your job at no fault of your own.” Numerous Mississippians have reached out to the Jackson Free Press in recent weeks, sharing fears of being expected to work with the public in businesses that they felt were either firmly non-essential or else abusing the broad social-distancing guidelines in Reeves’ original executive order.

Reeves said he would seek clarity on those questions as soon as possible. “I think that'll be a question that we'll have to ask Jackie Turner and the Mississippi Department of Employment Security,” he said. “Those are things that the lawyers are looking at as we speak.”

Reeves said a public address with MDES to address just those questions was forthcoming “sometime soon.”

The governor attempted to address some of the confusion over his previous executive orders, particularly over the broad definition of “essential businesses,” though he acknowledged that he did not have perfect command of where each business might fall under the order. The Jackson Free Press asked Reeves if car dealerships, included in the original executive order as an essential business, would remain open during the shelter-in-place order. Reeves declined to comment, but told this reporter that he would follow up on the question soon.

Churches ‘Essential’ and Open, But No Gatherings Over 10 People

Furthermore, while the original order declared religious organizations to be essential services, Reeves made it clear that they are not exempted from the legally binding requirement to avoid gatherings of more than 10 people. “I do think we can limit their ability to gather,” Reeves said. “The executive order that I signed several weeks ago makes it implicitly clear that you cannot gather in groups of 10 or more for social gatherings, and I think that fits that category.”

In spite of the new lockdown, which supersedes and expands yesterday’s limited shelter-at-home order for Lauderdale County, Dobbs said the isolation and targeted approach that the Mississippi State Department of Health unveiled last week was still being employed.

The strategy, which focuses on identifying disease clusters and rapidly responding to determine secondary contact infections, is part of what helped slow the spread of disease in South Korea. Until today, Reeves and Dobbs were emphasizing that the State did not need to close the whole state, but could do it on a county-by-county basis as part of this strategy. Today, Dobbs assured the press that the state lockdown will also assist that policy.

“The (epidemic) response teams have been activated, and they're out on the field working today. So the timing's perfect—I mean, for implementing the slowdown. This is just a more aggressive defense while we're continuing to implement and ramp up our offensive strategy,” Dobbs said.

The governor ended the presser with a plea to all Mississippians. “I urge you to comply. I urge you to understand that working together, we will get through this. Stay safe and god bless,” Reeves said.