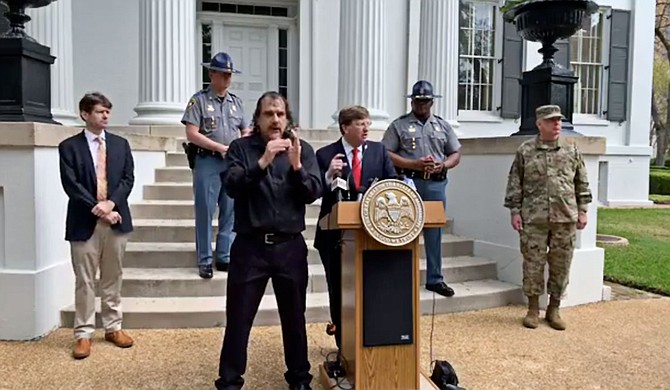 Gov. Tate Reeves signed an executive order that sets a weak standard for social distancing, and then exempts most Mississippi businesses from that standard. He needs to replace it with stronger “stay at home” instructions that other states are adopting to limit the number exposed and to avoid crashing the state’s medical infrastructure. Photo courtesy State of Mississippi

Gov. Tate Reeves knew that COVID-19 was headed toward Mississippi at least a month ago. His own timeline, sent to the media, shows that he activated an “incident command structure” at the Mississippi State Department of Health on Feb. 20, 2020. He signed an executive order setting up a COVID-19 steering committee on March 4.

Then he went to Spain with his family on spring break the week of March 9, as the pandemic was exploding in Europe, including the country where he vacationed.

Reeves’ actions before spring break came during the span of time when Donald Trump was downplaying and framing concerns about COVID-19 as a Democratic “hoax,” while top government officials were being briefed that it could be as bad as the 1918 flu pandemic. In other words, top Republican officials knew what could happen before Reeves got on that plane.

Since the governor’s return from his vacation, he has declared a state of emergency, extended school closures statewide, expanded telehealth, expedited unemployment benefits and signed a bill that could guarantee pay for local workers told to stay home during the pandemic. Those are positive moves we support.

What Tate Reeves Did Not Do in His Executive Order

What Reeves had not done, and still has not done, is follow the lead of states near and far by truly ordering only essential businesses and services to remain open.

What Reeves did instead this past Tuesday has been a bona fide mess. Under pressure from this newspaper and Mississippians seeing buffet restaurants, flea markets and car auctions continue to operate with crowds, he signed an “executive order suspending dine-in services, defining essential businesses,” as his office called it in a press email Tuesday. (The order did not, in fact, suspend all dine-in services, but limited it to up to 10 people at a time.)

First, it should be noted that the order itself is an extremely weak one. Any business or organization that it would apply to is simply limited from having more than 10 people gather at once. Even in his spoken examples at a press conference today, he has trouble articulating how that works, exactly.

Second, the order then goes on to exempt pretty much all businesses from that requirement.

Deciding what businesses and services are, and aren’t, “essential” is a tough call. It takes leadership and guts. You will be criticized; you might be wrong in some cases.

But the reason for doing it is clear—the less often that people come into close proximity with one another, the slower this virus will transmit. We need to ensure that our health-care infrastructure is not overwhelmed by too many cases too quickly as has happened in Italy, Spain and other countries, and is starting to happen in some U.S. cities.

Many states are making these hard choices about what is “essential” in order to allow as many people to “stay at home” or, more stringently, “shelter in place.” The science-supported goal is to help flatten the curve and keep more people alive, especially the elderly. (To date, all six reported deaths in Mississippi are of people over 60.)

The governor’s executive order is a not-very-subtle attempt to limit the number of businesses that his weak social-distancing guidance would actually apply to. His long, rambling and sometimes-conflicting executive order places nearly any kind of business you can think of into the list of exempt “essential businesses and operations.”

For example, not only does Reeves order that it’s essential that more than 10 people be able to gather to sell and repair cars during this pandemic, he mentions car sales no fewer than three times in the order, presumably for lack of proofreading.

Reeves told reporters today that the list of “essential businesses” hews closely with the list provided by the Department of Homeland Security. In comparing the two, however, we find that “offices” and “factories” are on the governor’s list; those broad categories are not on the federal list. Firearm retailers and manufacturers are on the governor’s list; a search of the federal document finds no reference to the word “firearm.”

Third, the executive order contains specific, direct language saying that it overrides any efforts by other bodies—like local mayors—to order stronger distancing in their areas of Mississippi.

This executive order created an uproar after we reported it Tuesday night, causing mayors to demand Wednesday to know if he would enforce it. Some say Reeves assured them he wouldn’t and that he did not intend the following section to mean what it actually says:

“Pursuant to Miss. Code. Ann. § 33-15-31(a), § 33-15-31(b), § 33-15-11(c)(1) & § 33-15-11(c)(4) any order, rule, regulation or action by any governing body, agency or political subdivision of the state that imposes any additional freedom of movement or social distancing limitations on Essential Business or Operation, restricts scope of services or hours of operation of any Essential Business or Operation, or which will or might in any way conflict with or impede the purpose of this Executive Order is suspended and unenforceable during this COVID-19 State of Emergency. However, nothing in this Executive Order shall in any way alter or modify the authority of the Mississippi Emergency Management Agency, the Mississippi Department of Public Safety or of the State Department of Health and the State Health Officer.”

Today, Reeves confirmed that it did mean what it said, but that he was issuing another executive order to allow local authorities to close restaurants or impose curfews if they wanted to. Still, Tupelo Jason Shelton today reworked some of his local orders to comply with Reeves’ order.

What the governor now says is that his executive order sets a “minimum” or “floor” and that mayors can add to it, as long as they don’t impede the operation of any “essential businesses”—such as shopping malls, rental car agencies, gun stores, “religious facilities” and “offices.”

The Alternative Is Much Worse

Let’s recap. The governor’s order creates no “stay at home” or the more stringent “shelter-in-place” style rule. In it, he recommends that people follow MSDH and Centers for Disease Control recommendations for washing hands and staying home if you’re sick. He suggests working from home if possible. Hospital and hospice visitation is limited ... mostly.

For a very few industries—restaurants, fitness services, and anyone who can’t fit themselves into categories such as “offices” or “factories” or manufacturers of “products used by any other Essential Business or Operation”—only 10 people can gather at once. For everyone else he has deemed “essential,” even that 10-person ban is lifted.

Tate Reeves should withdraw this poorly written and poorly conceived executive order and issue a new one that limits commerce to actual essentials. As it stands, businesses that had sent employees home may well decide under his current order to reopen, causing a chain reaction of “well, if the competition is headed back to the office we better go, too….”

It also puts entirely too many workers completely at the mercy of their bosses and owners, who can fit their businesses into a broad “essential” category and then pack employees back into the job site like sardines as long as they aren’t coughing and have clean hands.

Fewer people in direct proximity with one another means COVID-19 spreads less, and more slowly, than it will without social distancing. While the JFP certainly sees the value in getting back to work as soon as possible—closed venues, canceled fundraisers and struggling restaurants have directly challenged our own ability to make payroll—we need to start by ensuring that Mississippians don’t find themselves in overwhelmed testing centers, over-capacity hospitals and, eventually, filling up the mortuaries.

Then we can get the Mississippi economy firing again. The alternative is much worse.