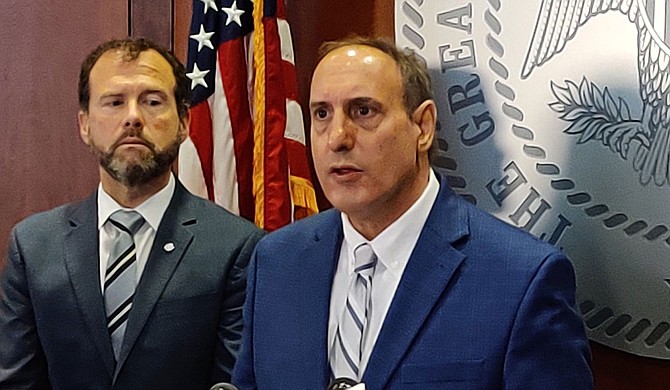 Gov. Tate Reeves signed an executive order calling for “shelter in place” for Lauderdale County for the next 14 days. State Epidemiologist Dr. Paul Byers said that the Mississippi State Department of Health recommended the lockdown after several days of rapid growth of the virus in the county. Photo by Nick Judin

Largely due to rapid localized spread of COVID-19 over several days, Gov. Tate Reeves signed an executive order today laying down a shelter-in-place order for Lauderdale County, which includes the city of Meridian, “and each and every one of the municipalities therein,” the governor said. The order begins tonight in the east central Mississippi county at 10 p.m and is to last 14 days. Reeves, joined by Mississippi Department of Health State Epidemiologist Dr. Paul Byers, told the press Tuesday morning near the Capitol that the State appraised local authorities well in advance of the order, and urged residents to remain calm.

Lauderdale has the seventh highest number of cases of Mississippi’s 82 counties with 35 cases and no deaths to date, and is 12th in cases per capita in the state. This morning, MSDH confirmed that the state now has 937 confirmed cases and 20 deaths. Of the 20 deaths, MSDH reported, one person was age 30-39, two age 40-49, one in 50s, and the rest over age 60.

The order goes farther in Lauderdale than the governor’s statewide executive order, shutting down non-essential businesses and requiring residents to justify all travel outside their home. Grocery stores, emergency infrastructure, and other critical businesses and services listed in his executive order will remain open, and employees may continue going to work, Reeves said.

Byers explained that the reason for the county-wide lockdown is the rapid spread of cases in the area. Lauderdale County’s 35 reported cases of COVID-19 is less than Hinds, DeSoto, Rankin, Madison, Harrison and Jackson County. But it was the rapid discovery of many new cases, including in an unnamed nursing home, that prompted the lockdown, Byers said, acknowledging that the county had been behind the curve on testing where areas like Pearl River County had been quick on the uptake.

The State of Mississippi declined today to provide the number of tests per county to date, though Byers remained open to releasing the information in the future. The Jackson Free Press asked about the State releasing race data on the cases and deaths, and Byers said plans to do so were in the works.

“Several” cases of the novel coronavirus have been detected at a nursing home in Lauderdale County, the press conference revealed. Byers declined to specify the name of the affected nursing home or the specific number of infected individuals, and clarified that the nursing home outbreak does not represent all the cases discovered in Lauderdale. He said that while not everyone who has had contact with the nursing home has been alerted, the State has notified those considered at risk of direct exposure to the virus.

Reporter Scott Simmons of WAPT pressed the State on why it was not releasing the name of the Lauderdale nursing home and others where they have confirmed COVID-19 infection. Byers answered that “it’s not a larger issue outside that nursing home,” adding that they are being “sensitive” to privacy concerns of the residents.

Nursing homes are at particular risk for COVID-19 outbreaks among residents and staff, considering the virus’ particular threat to individuals over age 65, and those with conditions such as heart or lung disease. The Grove nursing home in Marion County informed residents’ families over the weekend that a nurse there was diagnosed with COVID-19, while three cases of the novel coronavirus were detected at a Tunica County facility, and “several” were discovered in the MS Care Center of Raleigh in Smith County.

The only Mississippi counties without confirmed cases as of today are Issaquena, Jasper, Wayne, Greene and Stone counties in central and mostly south Mississippi.