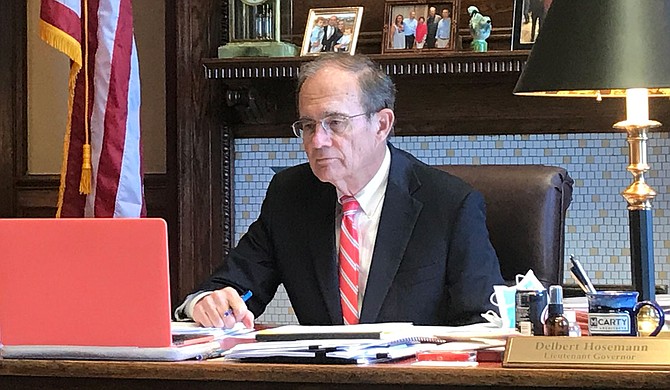 With COVID-19 rampaging through the Magnolia State, Lt. Gov. Delbert Hosemann would like to see a late start to the 2021 session. "You know, we qualify as a super-spreader event," he told the Jackson Free Press in a Dec. 14 interview, recalling the legislative outbreak earlier in 2020.

Hosemann had a map of Mississippi in mind. The senators and representatives that come to gather in the  Capitol chambers in Jackson dot the state, a grimly perfect geographical distribution of the virus, were another outbreak to occur among legislators.

"We can do the people's business when we have more people vaccinated. That will be a safer environment for them to go home from," Hosemann said.

But when the session kicks off in earnest, legislators must find a way to accomplish long-sought funding improvements against a backdrop of pandemic-driven economic decline.

Hosemann's top priority in the 2020 session was a teacher pay raise above the tepid increase that came the year before. During COVID-19, legislators killed that bill in the last stages of approval, and the budget for the coming year is lacking in any additional compensation for the state's public school teachers.

But the lieutenant governor says he is committed to accomplishing that goal even under coronavirus in 2021.

The Joint Legislative Budget Committee released its budget recommendation for fiscal-year 2022 on Dec. 7. The plan includes just over $197.3 million in cuts to the state budget for a total of 3.13% less than the previous year. 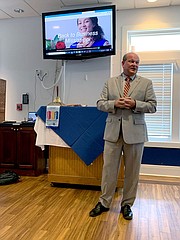 “We need to look at sales tax, property taxes, use tax. … The income tax is just one piece of the larger puzzle that is a part of the revenue,” Sen. Brice Wiggins, R-Pascagoula, says about upcoming budget negotiations at the Legislature. Photo courtesy Brice Wiggins

Teacher incentive pay is also missing, a difficult metric in a year with more disrupted school semesters than any in living memory.

Looming over the budget itself is the threat of continuing economic depression from the virus. Though the brief period of mandatory lockdowns at the pandemic's inception are now a distant memory, voluntary isolation continues to threaten revenues.

Hosemann told the Jackson Free Press that the ongoing economic danger of COVID-19 is factored into the budget recommendation and not just the damage it has already done.

Medicaid expansion may not be an immediate target for the 2021 session, but Hosemann said legislators will have an extensive discussion of public-health challenges that expand beyond COVID-19.

"We're looking at funding OBGYNs in (federally qualified health centers). We did the bill last year, but COVID got the money," Hosemann explained.

FQHCs are community clinics intended to serve patients regardless of their ability to pay, often in underserved and rural areas. Investment in OBGYN services at Mississippi's FQHCs is one way to address the state's grave infant-mortality problems.

Racial disparity is part of Mississippi's struggles with natal complications. Legislative Black Caucus Chairwoman Sen. Angela Turner-Ford, D-West Point, warned in February that "Black women in Mississippi are three times more likely to die from complications related to childbirth. This is a travesty. And we want to do something about it."

Lt. Gov. Hosemann sees better funding for childbirth services as a positive for every Mississippian. "We have serious problems with infant mortality across the spectrum. FQHCs are open to everyone, no matter what your economic status is," he said.

An End To State Income Tax?

One month ago, Gov. Tate Reeves released his state budget proposal from quarantine, outlining his priorities for the coming legislative session. Most notably, Reeves called for an end to income tax in Mississippi, proposing a staggered elimination of both of the remaining brackets by 2030.

That suggestion quickly found support from House Speaker Philip Gunn, R-Clinton, long a proponent of doing away with income tax in the state.

"We have been trying to find ways to develop a more solid, fairer tax structure," Gunn said earlier in the month.

But the proposal faces a rockier climb in the Senate, with Lt. Gov. Hosemann throwing cold water on the proposal out of concern for state revenues.

The Jackson Free Press asked Hosemann if he supported the total phase-out plan and how he expected to fill the $1.8-billion hole in the state budget it would leave behind.

"Your second question answers the first question. I don't know that you need another statement from me," Hosemann said. "It's a 2-billion-dollar question. I am open to any solution to that. But, until we have a solution ... it's not 'Field of Dreams.' I don't print money. We have to have enough funds to pay for highway patrol, education, all the other things we pay for as a state."

Hosemann said his agenda, in lieu of a realistic plan for such a massive tax cut, was to continue cutting redundancies in state government. "We abolished two state agencies this last (session) and shrunk a third one. ... We deleted 4,119 vacant positions. I would love to find a way to replace that revenue with a meaningful plan, but in the interim I intend to continue to reduce the size of government," Hosemann said.  The suggested cuts include a number of state projects, including mental health services, universities, the corrections system, and a stiff $14.3-million cut to the Mississippi Department of Child Protection Services.

The relative balance of tax burden is an issue for Hosemann. "Two billion dollars is very difficult to come up with a solution for, other than raising some amount of tax in some other place," he said. Attacking personal income tax would be the most economically regressive way to accomplish that goal.

Mississippi currently has three income-tax brackets, with no tax on the first $2,000 of taxable income, 3% on the next $3,000, 4% on the next $5,000 and 5% on all taxable income above $10,000. Both Gunn and Reeves, then lieutenant governor, were part of the successful 2016 effort under Gov. Phil Bryant to phase out the lowest tax bracket. The 3% bracket is scheduled to vanish completely by 2022.

Roughly $1.8 billion of the state's revenue is derived from personal income taxes, part of $5.8 billion total from all state taxes, including sales, use and property tax. Those funds provide the majority of the more than $6.25-billion state support fund, the portion of Mississippi's budget over which the Legislature exercises the most control.

Alaska, Florida, New Hampshire, Nevada, South Dakota, Tennessee, Texas, Washington and Wyoming have no personal income tax. For the majority of these states, revenues are propped up with significant property and sales taxes. Mississippi's property taxes are comparatively low, at only .8%. Its sales tax is already in line with national averages at 7%.

Jarvis Dortch, executive director of the Mississippi American Civil Liberties Union, told the Jackson Free Press in a Dec. 21 interview that, in the aftermath of the 2016 push to eliminate the 3% tax bracket, Gunn co-chaired a special committee intended to present ideas on expanding the tax base. The panel returned a number of economically regressive proposals, including additional sales taxes on prescription drugs.

"He's a big fan of the use tax," Dortch, formerly a Democratic state representative, said of Gunn. "He thinks people should 'pay their fair share,' as he puts it."  Speaker Gunn's office did not return a request for an interview.

A 2018 study from the Institute on Taxation and Economic Policy showed that only the top 5% wealthiest Mississippians pay a higher portion of their income share to income tax rather than sales tax.

The Jackson Free Press asked Hosemann if he could explain a tax burden distributed in this manner to his constituents. He answered with one word: "No."

No Karl Marx in State's Schools

Reeves' budget included one more controversial measure—$3 million reserved for the creation of a "Patriotic Education Fund," a state-sponsored propaganda initiative intended to celebrate "capitalism, democracy, and other uniquely American values." The governor warned in his budget recommendation that a "targeted campaign (of) foreign and domestic influence" was attempting to indoctrinate children with socialist and communist teachings.

Support for the initiative among legislators reached for this report was tepid at best. Sen. Wiggins reframed the project, suggesting that $3 million for a program to increase civic literacy would be palatable. "We need to do something to improve knowledge of basic civics in Mississippi—that understanding has been lost," he said.

But Wiggins acknowledged that he had yet to encounter the haunting spectre of Karl Marx in Mississippi's public schools. "In my district, I have not seen any concerns of socialism, or anything like that. I think (they) do a great job of teaching. My kids go to public schools, (and) I've never been concerned," he said.

Hosemann was even more critical of the idea, echoing Wiggins' unfamiliarity with communist indoctrination in the state's public schools.

"I've been in at least 50 Zoom calls over the last few months, as teachers have really just created this distance learning (curriculum). To learn about that I went to class—Spanish classes, Government classes. In none of those ... from Oxford to Pascagoula, have I seen any socialist agenda," Hosemann told the Jackson Free Press. "I'm not sure where the governor's getting his information."

Rather than spend millions of taxpayer dollars on a problem he cannot detect, Hosemann said his priority was investment in teacher pay and crumbling school infrastructure.

"What I see is schools that are struggling to pay teachers, to keep them there or to attract new ones. I see schools in Sunflower County with leaky roofs. The funds that we can expend... I'd rather spend it on keeping teachers in (Mississippi)," Hosemann said.

The teacher pay raise Hosemann hopes for is not represented in the Legislature's initial budget proposal. But, with more than $877 million in unallocated funds, there is still room to negotiate when the session rolls around.