EDITOR'S NOTE: Truth and Journalism on the Front Lines of COVID-19 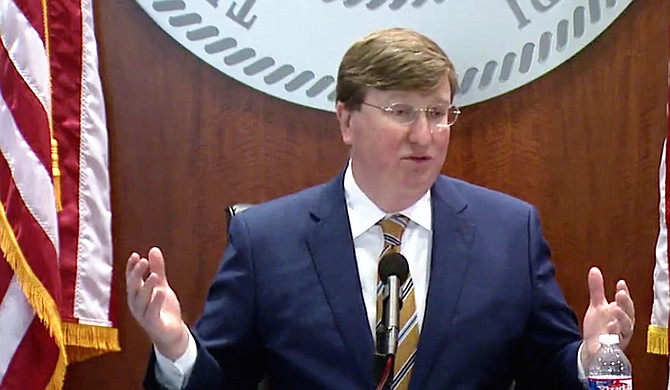 On the same day that saw 2,457 new COVID cases, Gov. Tate Reeves told reporter Nick Judin he was wrong that it was a new peak. In fact, Reeves was wrong. Photo courtesy State of Mississippi

At Reeves' Nov. 24 virtual press briefing, Nick pressed him on his piecemeal  approach to mask mandates, only including a county suffering COVID spikes rather than trying to prevent them. "If you aren't listening to the public-health experts urging a mask mandate, who are the experts that you are listening to?" Judin asked him.

Coupled with Reeves' attempts to fund so-called "patriotic education" in Mississippi—as in don't dare question white men's decisions through U.S. history no matter who they hurt—Reeves' answer inherently tried to frame Nick, and by extension the Jackson Free Press, as partisans pushing  "advocacy" for the "other" side of the broken red-blue spectrum from Reeves.

Tate Reeves is nothing if not a partisan first and foremost, as his choices to please Donald Trump by withholding sufficient COVID-19 safety regs have shown us all in the most horrendous way possible.

Of course, Nick's "position" is the same of Mississippi's medical establishment: all leaders should heed what scientists have told us since March would stop the spread. Remember back then when Reeves finally ordered shelter-in-place and later finally enacted a statewide mask mandate? Things are worse now because we did far too little as a state, without a strong leader at the helm, to prevent this predicted winter explosion.

Stopping the spread, whether among Reeves' partisan friends or his partisan enemies, is this publication's only "position" on COVID-19. We are not playing partisan games even if the governor and his president are—and with Mississippians' and Americans' lives.

On Dec. 1, Reeves laid it on thicker with Nick as medical professionals—whom Reeves is treating worse than he is reporters, as Nick pointed out to me—were warning Mississippians that our health-care system is collapsing because so many will not wear masks, distance or avoid gatherings.

After Nick asked the governor about the obvious fact that COVID-19 had already surpassed its summer peak, the governor decided to declare Nick wrong. "When you say that we are currently exceeding our peak, that's fundamentally inaccurate. That's just not true. That's false, in fact," Reeves told Nick and other virtual viewers.

Except it wasn't. The next day, the facts hit the proverbial fan when the Mississippi State Department of Health reported 2,457 new cases for the same day Reeves had basically called Nick a liar. It was almost 500 cases higher than the previous one-day record of 1,972, which the state set on Nov. 20. Statewide, ICU units in at least a dozen hospitals were full.

Nick was right because he does his homework and listens to science professionals—the same thing Reeves could do if he didn't care more about partisan games, and the adoration of a badly defeated lame-duck president than he does about actually stopping the spread of COVID-19 with responsible statewide regulations.

I'm old enough to remember the cardinal rule of being a conservative was that public safety was the primary role of government. How did that become not-a-thing, leaving hospitals to ration medical care, and in a state without Medicaid expansion due to the same cruel partisanship?

To be fair, it's not like Democrats in our state have done enough, either. They may not have much power in Mississippi, but everyone should use their bully pulpits daily to remind people that the excuse of "saving the economy" is a sham. Small businesses are closing daily due to this prolonged pandemic that smarter, stronger safety regulations could have prevented months ago.

Make no mistake: Without federal stimulus—blocked by the Senate if it doesn't again give away enough to the 1 percent—our economy is only going to get worse as Trump golfs and schemes to steal the White House back by hook or crook.

As Nick well knows, our job as journalists is not to both-sides or horse-race Reeves' unscientific approach and his genteel attacks on journalists and medical pros he calls "so-called experts." Reeves has repeatedly been proved wrong. He has refused to lead this state out of the pandemic, just as Trump refused to lead the country out of it. It's hard to imagine what our governor's endgame is; it's not like Trump is loyal to anyone but himself.

History books will be brutal to them.

But Reeves and his staff tried this from the start. Back when Nick reported that Reeves' executive order was a mess of contradictions and legally superseded local orders, the governor's staff went after Nick's reporting and me personally, because you know that's what you do with sassy lady editors. They planted distortions with doting journalists who hadn't read the order carefully, and all of them made asses of themselves while trying to discredit Nick and the Jackson Free Press. It was silly and scary.

None of it has worked out for them. Why? Because good reporters do their homework and stay the course, especially to help save lives. The Jackson Free Press has never committed the journalistic malpractice of access journalism—lapping up anything a powerful person says just to cozy up to power. We are here to report the truth to you about this pandemic, and whatever else we can, and we're not about to soft-pedal the governor because he might once again try to discredit our continued truth-telling.

I've quoted my partner Todd Stauffer's mantra "Do the right thing and wait" many times, and it applies here. But little is more tragic then being proved right repeatedly because public servants on the taxpayer dime continually deny both science and the safety efforts Mississippians need to stay alive and healthy. Cheers to Nick and other good reporters on the front lines of this pandemic, ducking and dodging all the official attempts at disinformation as they work to save lives by telling the damn truth.