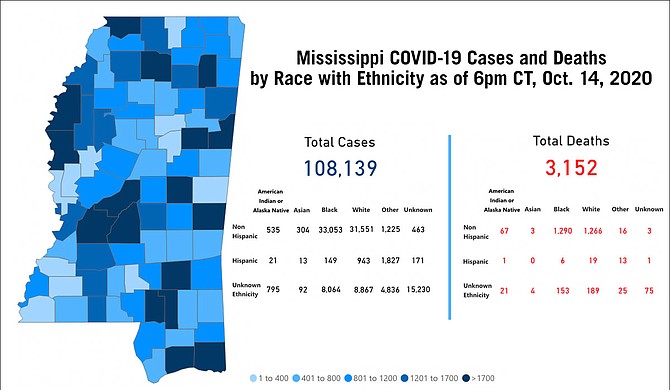 Two weeks to the day after Gov. Tate Reeves lifted the statewide mask mandate, a massive swell in COVID-19 cases is shaping into a third spike, imperiling the people of Mississippi and threatening mass community transmission during next month’s elections.

The Mississippi State Department of Health announced 1,322 new cases of COVID-19 this morning, more than any single-day report since Aug. 19. The dramatic spike in new reports follows over a week of concerning metrics and increasingly dire warnings from State Health Officer Dr. Thomas Dobbs, who warned on Oct. 6 that “our equilibrium is unraveling.” Days after the end of the mask order, Dobbs lamented that it was “discouraging to see mask use dropping off so rapidly after mandate lifted.”

The new cases are not a statistical outlier, or an instance of delayed reporting, but rather a clear and consistent sign of increased community transmission. All of MSDH’s available metrics show similarly concerning increases. Syndromic surveillance displays sharp upticks in visits to clinics and emergency rooms for COVID and COVID-like diseases. Hospitalizations have returned to mid-September levels, adding over 100 newly hospitalized patients since early October lows.

The speed with which Mississippi can address the clear signs of a third spike of coronavirus will now be put to the test. The rising curve now resembles the uptick in July that preceded an overwhelmed hospital system and some of the deadliest days of the virus in the state.

Failure to immediately arrest the growth of coronavirus will mean community spread will be at unprecedented peaks on Election Day, a situation uniquely deadly for Mississippi, the only state in the U.S. to resist any attempts for broad expansion of absentee or early voting during a pandemic which has now killed over 3,152 of its residents.

On Sept. 30, as the governor allowed the mask mandate to lapse, this reporter asked if the state could respond quickly enough in the event of a new spike. His answer was simple: “Yes.” Pressed again, the governor cited “months of experience” with the pandemic as evidence that “we can very quickly adapt our strategy.”

After today’s report from MSDH, Gov. Reeves took to Twitter to warn Mississippians that “COVID-19 is not gone!” The governor shared no further plans on the nature of the state’s forthcoming quick adaptation to the new wave, but assured the state that he wished to “be cautious and limited in using executive action.” The governor has not held a coronavirus press event since lifting the mask mandate at the end of September.

Confirmed cases of COVID-19 are rising nationwide, threatening hospital stability across state lines as well as in Mississippi, the same deadly combination that overburdened the state’s health-care system in August.