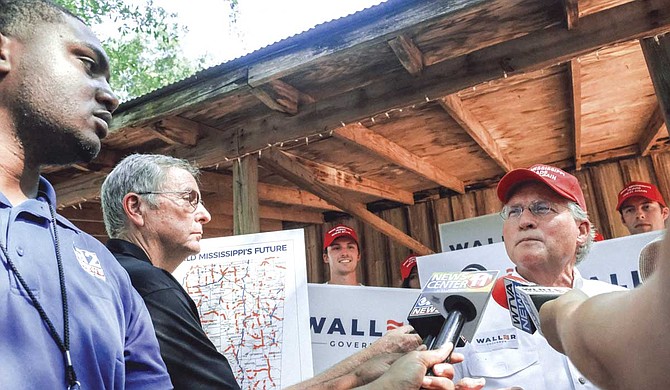 Media gathered around Bill Waller Jr. at the Neshoba County Fair in August 2019. But the meaningful substance of his platform seldom broke through. Photo by Ashton Pittman

Did you know that something earth-shattering happened in the Republican runoff for governor last week? It was far beyond two men trying to prove who is the "real conservative" and one of them going on the attack against national political figures like U.S. Reps. Alexandria Ocasio-Cortez and Ilhan Omar, who have squat to do with what happens on the governor's watch in Mississippi.

It's an old Neshoba County Fair trick—paid campaigners show up behind Democratic candidates with hand-drawn pics of Barack Obama or a Clinton or Bennie Thompson to scare conservatives into voting, often, against their own best interests. This year, the GOP establishment adapted the stunt for a fellow Republican, Bill Waller Jr., via mailers and tweets.

If you read the Jackson Free Press regularly (including jfpdaily.com), you know their runoff was a referendum on whether a majority of Republican voters care enough to vote for the candidate who was willing to admit that Medicaid needs to be expanded in Mississippi to help people without health care and to keep rural hospitals open. Waller also supported the teacher-pay increase that Lt. Gov. Tate Reeves and other anti-public-education Republicans stalled in the Senate.

Waller then took close to half the vote, including from many Republicans in our primary readership area. Still, Reeves won. So the popular media narrative is that Republicans wanted the more "conservative" candidate with the biggest financial "war chest," and the band plays on.

The real question is how much of Mississippi gets actionable information about candidates from our media outlets.The problem with "horse-race" reporting—treating elections like a breathless race focusing on strategy, polls, money and rhetoric—is apparent in supposedly "statewide" journalism produced locally. One outlet even said in a headline that the runoff debate between Reeves and Waller was to prove "who is the real conservative."

The truth on the ground was different, as we have reported with constant focus on actual issues that affect Mississippians, including in the cover story by Seyma Bayram and Ashton Pittman out this week. If we're reporting donations, we work to report who wants what in exchange for the funds. Enterprising policy-based election coverage is more work than breathless glances at finance reports, but that's our job. It is vital information for our readers to help them make good decisions that aren't just based on political finger-pointing and who the polls, or the "war chests," favor on a given day.

One reason some media outlets choose the horse-race frame is to pretend they're objective, "balanced" or "neutral"—sometimes even if they or their backers actually have a dog in the hunt.

"In terms of horse race coverage of policy debates, other than failing to provide context and background for audiences ... the strategy frame's preferred 'he said, she said' style leads to a false balance in the treatment of technical issues such as climate change or the teaching (of) evolution, issues where there is clear expert consensus," Matthew C. Nesbit wrote in Big Think. And if the reporting is based on polling, then the journalists can hide behind them.

Whether the motivation is easier reporting or to obscure agendas, it is vital to stop treating elections like a fun, two-sided thrill ride, which (usually male) political reporters and campaign strategists love—and they're getting paid either way, even if your hospital closes. What gets lost are vital facts and ensuring that the entire state knows what's at stake in our elections. At the Jackson Free Press, we work to ensure substantive policy-based journalism is available in the greater Jackson area, but what about the dozens of counties that face a news desert devoid of substantive reporting?

Donald Trump is likely president, in fact, due to horse-race reporting. National media, especially networks, are still taking deserved heat over how they constantly gave what they considered a fringe candidate an open microphone to expound endlessly, often without contextualizing or factchecking. That was especially true at supposedly "liberal" NBC—which does love to bend itself into pretzels to prove it is, in fact, balanced and neutral.

Of course, "balance" is often not real on the national or local level. In 2016, before the other leg of his britches fell in the #MeToo revelations (and before NBC rejected Ronan Farrow's explosive Harvey Weinstein investigation), Matt Lauer did absurd interviews with Trump and Hillary Clinton. He was tougher and more derisive and condescending with her, which is no surprise considering what we now know about his treatment of women, down to his use of the door-lock button on his desk.

Later, NBC News Chairman Andrew Lack—who started a nonprofit news website in Mississippi that predictably loves it some horse-race reporting—blamed Hillary Clinton for his team's Trump fixation. "We got criticism in the media ... You elected Trump because you never stopped covering his rallies. You never stopped putting him on TV," Lack said at Ole Miss in 2017, as reported by the website he started. "The point was (Trump) was so accessible, and he wanted to tell his story." He added that Clinton was less accommodating and not liked, to boot: "... I think the biggest story that we missed, certainly NBC, we underestimated the dislike of Hillary in the country."

To Lack's mind, at least in 2017, the Trump coverage seems to have been worth it. "I think it’s a helluva story—and I like big stories,” Lack said then, reported by Daily Beast.

A "helluva story" is no excuse for excessive coverage of a man who led the "birther" movement against Obama without sufficient context and was tweeting in 2016 incorrectly that black people commit most murders of white people. I grew up around men who thought that way in Neshoba County, and they don't deserve open microphones, either. That is dangerous.

The 2016 obsession with using Donald Trump for ratings was sick infotainment.

Washington Post media columnist Margaret Sullivan addressed coverage of Trump's "migrant caravan" hysteria" in November 2018, comparing it to the kinds of 2016 drumbeat Trump coverage Lack blamed on Clinton. Media had learned some lessons in the two years since Trump was elected, but not enough, she wrote.

"Too many journalists allow Trump to lead them around by the nose, which is why you’ve heard so very much about that migrant caravan in recent weeks," Sullivan wrote then. "With the president as their de facto assignment editor, too many seem to respond 'how high?' when Trump says jump."

She added later in the column: "Journalists too often parrot what the president says and giddily follow his shiny-object distractions du jour."

This is exactly what we're seeing during this election year in Mississippi. But remember: Turning any election into a rollicking shit show that turns voters off is about easy ratings, clicks, and low-effort reporting and editing. The journalism academy has bemoaned the media's horse-race antics for decades now. It was one of the "critical issues" facing journalism we discussed when I was in graduate school at Columbia 20 years ago.

'Journalists Are Identifying with the Wrong People'

New York University professor Jay Rosen has long warned about the dangers of horse-race reporting, including political journalists framing themselves as "the insiders." (We're not, nor should we be.) "Things are out of alignment. Journalists are identifying with the wrong people. Therefore, the kind of work they are doing is not as useful as we need it to be," Rosen said in a 2011 talk, "Why Political Coverage Is Broken."

Rosen calls instead for a "citizens agenda" of asking voters what they want to know from the candidates, a strategy the Jackson Free Press is embracing. "If reporters ask the people they’re trying to inform, 'What do you want the candidates to be discussing as they compete for votes?' no one is going to answer with, “You’re down five points in the latest polls. Realistically, can you recover?” he writes.

Polls may seem sexy, but hospitals keep people alive, that is. Rosen calls elections-as-games an "impoverished notion of politics, a cluster of bad ideas that together form the common sense of the craft."

That, in turn, contributes to voter apathy, and a belief that certain candidates (who play the horse-race media game well, usually) will win no matter what.. Think about it. Saying Waller-vs.-Reeves was about crowning the "real conservative" only plays to voters wanting a hard-right candidate. Others, even more moderate Republicans, may shrug and stay home, especially if all they see is non-substantive coverage and TV ads.  Then cynicism sets in.

When media took Reeves' bait to frame the race that way, he won right there. The remarkable part of a reporter bloviating about politics like a sports yapper is that they are the very journalists most likely to get used by candidates avoiding issues or their own record.

In fact, a national voting-machine expert dinged one of our giddiest horse-race offenders for declaring on runoff race day last week in a tweet that a voting machine in Lafayette County had just glitched after switching a vote from Waller to Reeves—even though reports of the same thing came in from multiple precincts counties, per the Waller campaign and The Clarion-Ledger, which to its credit, took the reports seriously.

In addition, Nesbit wrote in Big Think, the gamer reporting style actually handicaps certain candidates over others: "Horse race journalism focuses almost exclusively on which candidates or players are most adept at gaining power while also undermining the political chances of opponents."

This year's display of horse-race reporting fixating on statewide races, usually with scant or no mention of actual issues affecting non-candidates in stories, is especially onerous considering what's at stake in the news deserts throughout Mississippi. We have less than nine weeks until the November elections—the state's media need to use that time to comprehend and report issues that affect everyday people's lives.

We've had enough gamesmanship this cycle to fill a hippodrome. Journalists must leave the sound and fury to the strategists and tell readers what's really at stake.

Email [email protected] to participate in our new #MSCitizensAgenda dialogues to identify issues most important to Mississippians. Plus, free pizza.