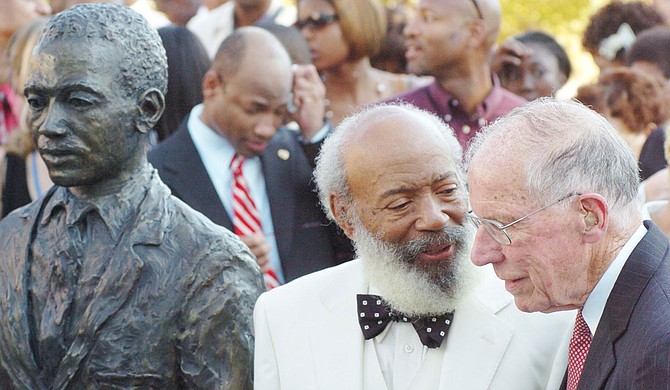 Jackson Free Press Editor Donna Ladd recounts the influence two remarkable men—James Meredith (left next to his University of Mississippi statue) and Gov. William Winter (right) have had on her life and this newspaper. Photo by Bruce Newman/Oxford Eagle via AP

If there was ever a time for one of those joyful New Orleans-style parades celebrating the life and spirit of someone who has just passed, it should be now for the 97 years that Gov. William Forrest Winter graced Mississippi with his full presence and dogged determination to help this state move past our dark, racist history in every way possible.

But we can't gather physically, so we must share our stories about how he touched our lives and inspired us and maybe even convinced us to stay here and keep fighting when it felt like a good time to bolt out of here into a kinder pasture.

Gov. Winter was one of two remarkable men who wrote me letters—real ones, not emails—starting not long after we launched the Jackson Free Press in 2002 determined to never ignore real history in our coverage, while believing fully in our people's ability to turn the corner on our past.

The other was Mr. James Meredith whose first letter to me—always typed on plain white paper, but signed in ink—caused me disbelief that it was from him. But now I have quite the collection of Mr. Meredith Mail, as I lovingly think of it.

The notes I still cherish from Gov. Winter started a bit later, handwritten on his letterhead, and often about one of my editor's notes confronting racist history. That he took time to write personal notes, encouraging me to keep doing what I was driven to do, was galvanizing for this Neshoba County girl. They're part of the reason the Jackson Free Press is still here, reporting the truth and filling in historic holes in Mississippi's revisionist narrative, 18 years later.

As so many know, Gov. Winter knew how to be fully present with others, as well as the necessity of encouraging younger generations. If a man like him, or Mr. Meredith, believes you should be doing what you're doing, well by damn, you keep going. Remembering the cherished notes and letters helps you shrug at the naysayers. I'm sure the governor knew that every moment of attention he shared meant that his life's work would touch more people.

By 2005, I was bopping into the Watkins, Ludlam, Winter & Stennis law firm, where he was still actively working. I settled into a comfy chair for a Q&A interview, writing later: "It was remarkable to be sitting with an 82-year-old former governor and current rabble rouser who is bolstered, it seems, by his retirement from political office to be able to say exactly what he thinks."

We talked about the perpetual underfunding of education in our state, which everyone knows leaves so many Black children here getting a lower-quality education. Sadly, too many don't care or prefer that inequity. Gov. Winter broke it down succinctly: Investing in public education is imperative because we are already so far behind due to all those decades of racism.

"We have to remember that we are playing catch-up," he told me in that lovely southern-gentleman drawl of his. "We can't provide educational services at the same level as everybody else because so many other states are so far ahead of us. Until we invest more, we are not ever going to catch up. It's not just about money, but we sure can't do it without money."

And although education is clearly vital to economic development, it is also necessary for a smart electorate. "Unless we have an educated citizenry capable of making wise, public decisions, we will make a lot of blunders in terms of public policy," the governor told me, adding that people need to know they're hearing coded racism with phrases like "lazy welfare mothers."

We're now seeing the result of coding truth out of our history, even as Gov. Tate Reeves—not exactly a statesman or a leader—covets Trumpian "patriotic education" to make white people feel better about darker parts of our collective past.

That ain't it. Gov. Winter knew that, I know that, many of you know that.

William Winter knew that in no small part because he was an "old segregationist" as he called himself in the documentary, "The Toughest Job." He was raised to follow Mississippi's segregationist code, and he worked to shed that racism as an adult. He clearly did that by learning real history, not being shamed into denial, and working to ensure that the rest of us learned that real history, too, so we can (a) not repeat it and (b) fix its legacies. You know, like unequal education.

A Soldier's Story: The JFP Interview with James Meredith 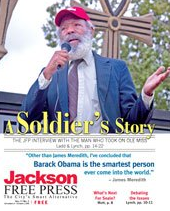 Donna Ladd and Adam Lynch interviewed Mississippi icon James Meredith in his Jackson home in 2008. His answers might surprise you.

Like me—did I learn it from him?—Gov. Winter believed real history also teaches how far Mississippi has come because, you know, we started on the ugly bottom when it came to racism and greed for wealth from slavery. "I like to say that, too often, Mississippians don't even get the chance to be proud of how far we've come," he told me. "That's why it's so important that schools teach more recent history, civil rights history, history of race relations."

Through the life of this newspaper and my adult years back in Mississippi, Gov. Winter and Mr. Meredith have been living history who have connected the past and present for me in the best possible way. Years ago, I was at a gathering honoring Mr. Meredith at Jackson State University with both of these giants. I listened as the governor and University of Mississippi law graduate talked eloquently about the immense impact of the man sitting nearby who integrated that university amid violence.

Before he closed, Gov. Winter decided to mention my work at the Jackson Free Press and our focus on what we all now call diversity, equity and inclusion. I cried openly as he spoke; I was overcome with emotion to be in these two men's presence, much less to be mentioned out loud.

Now, I understand what this hero statesman was doing. Gov. Winter knew this difficult work wouldn't be complete in his lifetime, and he was sharing pieces of his torch for us all to carry forward. It's hard to imagine how many others he did this with, but I am so grateful I had the chance to bask in his inspiring glow.

Thank you, Gov. William Forrest Winter. We're all going to do this for you, Mr. James Meredith and so many others who gave it all for us. Rest well.