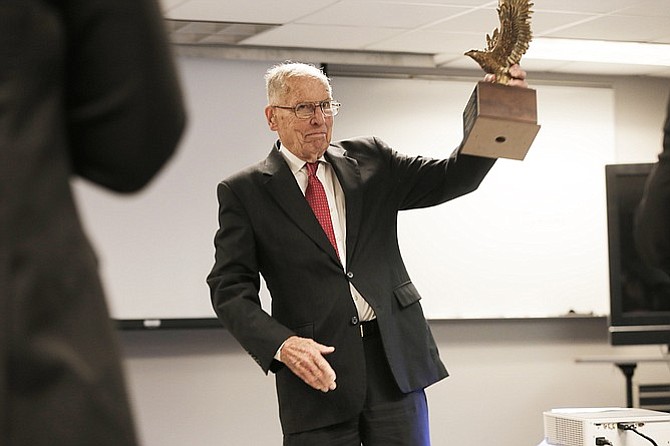 A few years back, I was leaving a talk at Millsaps College when a U.S. congressman from Mississippi stopped me in the garage below the building. The white lawmaker introduced himself and then awkwardly told me he really does care about race relations. In this not-uncommon private and revealing conversation with someone who believes he can't speak out publicly against racism, I got the immediate sense that he was riddled with guilt due to his choices, but didn't believe he had other options.

I felt sorry for him. Sort of. Living and governing that way on behalf of power and money, and in a way that appeals more to America's lesser angels for votes, is clearly some kind of fresh hell, especially if you don't believe everything you end up representing. But it's not like he and others can't choose the road less traveled. They just don't have the moral courage to take it.

Since Gov. William Winter fell on ice last Saturday, scaring the dickens out of so many people, I've been thinking about that congressman. Was it worth it to go along to get along, to play against what seemed to be his nature? Is his tarnished place in the history books worth keeping his mouth shut, at least publicly, about things that really matter, like preferring, say, tort reform over the need for well-funded public education?

Gov. Winter didn't follow the path of least resistance and the most power. He grew up in a segregationist society and has been open that he had to teach himself to reject the racism he grew up around. Like former Sen. Robert Byrd, a Klansman-turned-progressive on race, Winter proves it is possible to reject racial fear and become something greater than the sum of community "heritage"—but why don't more white people choose this hero's journey?

It's easier for many not to, I guess. There is fleeting power and top-dollar campaign contributions and maybe a sweet corporate lobbyist gig after you leave the political arena. The children can attend pricey private schools; you can all go skiing in Colorado when you feel like it. You can make your conservative daddy proud by carrying on long-held traditions.

But what mark do you make on your fellow man? Do you help lift up society and bring people together, or do you help the wealthiest divide and conquer it, plundering the spoils? Gov. Winter could have gone that path and probably served more than one term. But, along with his tireless "boys (and girls) of summer" team, he chose to fight hard for education reform in the 1980s—which essentially was the first real effort to take embedded racism out of the state's public-school system.

Since then, Gov. Winter has dedicated himself fully to fighting legacies of racism and proudly walking his own talk.

Winter is the white hero our state needs because, sadly, we have so few with the moral courage to stand tall for what is right. As a result, diverse people everywhere love him, instead of just a mean subset of very-wealthy white folk. He is surrounded by loving family and his long-time wife, Elise, who has fought beside him. That is true love. He lives in Jackson, not the suburbs, and he keeps fighting even as he nears 94.

Yet, Gov. Winter takes time to hand-write letters of encouragement to younger people trying to deserve his baton. I keep my collection of letters from him with my batch from James Meredith, and I own little that means more to me.

I last saw Gov. Winter in Carlsbad, Calif., for a national gathering of people involved in the W.K. Kellogg Foundation's "Truth, Racial Healing and Transformation" effort, which arguably has never been more needed and is holding a National Day of Healing on Jan. 17. Winter is the honorary co-chairman, and as always, he gave powerful opening remarks that I never tire of him saying, ending with "We cannot go back."

He is soldiering on, and so must we.

Gov. Winter provides such a contrast with the congressman at Millsaps, our current state leaders and the nation's new president. Their fight is hawking fear against people who need societal support or who threaten their lily-white voting base.

Lt. Gov. Tate Reeves has adopted the rhetoric of the past, slamming "outsiders" trying to make the Mississippi flag less oppressive and regressive, and he insults Mississippians who believe in asking for forgiveness in order to try get their votes for governor: Stop apologizing, he tells us.

Meantime, Reeves doesn't offer solutions for the continuing legacies of the past, as Gov. Winter still does. Winter isn't afraid to say that public education must be supported and funded because it will help those Mississippi left behind, even as he knows it will also keep all of us safer and grow our economic and jobs base. He, and I, choose abundance over spreading fear.

Reeves insults our intelligence, telling us school districts in the poorest and most historically segregated areas—often due to severe white flight when schools were forced to integrate—should get state funding based on the amount of money richer districts need. That logic breaks the brain.

Does Reeves really believe this, or is he just pandering to those who don't want to help "the other" even if it also helps them? It doesn't matter. It doesn't matter what's in a man's heart; his words and actions show the quality of a character and will outlive him in the history books. Same for women.

Heroes like Gov. Winter or Mr. Meredith or Medgar Evers or Fannie Lou Hamer or Hazel Brannon Smith are not born that way; they dig deep for the courage to buck the status quo, sometimes against the teachings of their own community and often at great personal cost. (Evers was assassinated, and Smith died penniless after pissing off white advertisers one time too many.)

I hear the words Reeves is intentionally using that puts him in the camp of white people I grew up around in Neshoba County blaming "outside agitators"—like Chaney, Goodman and Schwerner—for coming here and stirring up trouble. That "trouble," of course, was fighting for the rights, dignity and opportunity for all Mississippians, regardless of our mucked-up heritage of white supremacy and fear.

Each of us, regardless of political leanings, must fight for Gov. Winter's principles, which are under public attack like we haven't seen in decades as Trump takes office. It is the inspiration of self-made heroes like Winter that can help us take the next step, and then the next—not from people who only whisper their true feelings in a quiet, dimly lit parking garage.

Donna Ladd is co-founder and editor-in-chief of the Jackson Free Press. Follow her on Twitter at @donnerkay for daily sass and brimstone.