Home to the ‘Worthy Scrap' 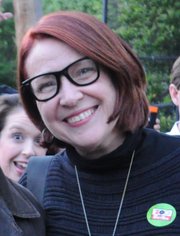 As I shook the hand of Myrlie Evers-Williams on April 25, 2002, at the Old Capitol Museum, I told her I had come home to Mississippi because my niece and nephew didn't know who her first husband was—a slight over-simplification, but essentially the truth. Until May 2001, I'd been living outside the South since the day after I graduated from Mississippi State in 1983. I'd written about social injustice everywhere but where it hurts me most. After all, growing up amid the defiant madness of bootlegging sheriffs and Klan rallies and nasty Citizen Councilors and forced integration and lynchings and segregated proms and Jim Crow and stubborn defense of the Lost Cause had made me an activist journalist in the first place. But, truth be told, I wasn't sure I was up to the "worthy scrap," as a good friend here calls it, of staying in Mississippi and working methodically for positive change. Simply put, I was afraid to challenge those I know and love the most, to write the truth as I see it back here on the home soil.

So, I watched from New York City on April 17, 2001, as my state voted nearly 2-to-1 to keep the Confederate battle emblem as part of its official flag. My reaction shocked me more than anyone: Within three weeks, my partner Todd and I were signing a lease in the city of my youth, where Medgar Evers was gunned down in front of his children on June 12, 1963, where integration had prompted a re-segregation, this one thankfully not codified by law, but devastating just the same. For me, April 17 was not a denouement. It was a beacon, calling me home.

Last April, Evers-Williams was back to give her family's papers to the state of Mississippi, to a populace whose collective bigotry had killed her husband and whose taciturnity had protected his murderer for 31 years. Standing on the pulpit in the House chambers of the Old Capitol Building—the room where Mississippi voted to secede on January 9, 1861—Evers-Williams talked about home. "I want to see Mississippi raised up where it ought to be," she said, standing regally in a yellow-and-black suit several feet in front of a state flag twisted around its upright pole, the Confederate battle cross peeking out cautiously. Why put his papers here? "This is where they belong."

Evers-Williams is not boycotting Mississippi and its progeny; she wants to introduce young people to her first husband. "I want to enlighten young people who don't know that history." Those humble words caused raw emotion to creep up into my throat that day, as so often happens since I came home. The answer seems so simple and pure, yet is so damned snarled and elusive: We need to talk about the past. Understand it. Demystify it. Young people need to know what the Confederate flag was used for, that some chunks of our heritage must be talked about but not celebrated, that the shame can be snuffed out with penitence and honesty. That the state can move forward, and away from No. 50, if we join together for positive change instead of blaming and stereotyping.

I often repeat the sentiment I heard former Gov. William Winter and Mississippi historian David Sansing express about the flag vote in May 2001 at the Willie Morris birthday celebration in Yazoo City. "Mississippians were asked to do the right thing for the wrong reason," Sansing said. The two men weren't rationalizing the lopsided vote, or paternalistically excusing the people of Mississippi for not excising the painful image that flapped in the wind above lynchings and on the back of Klansmen pickup trucks throughout the 20th century. They understand, I believe, that too many Mississippians simply do not know the state's complicated race history; it's been kept from us by shame and fear. Too many don't know that every layer of the state government and the local citizenry united to keep African Americans separate and unequal and to defend lynching, and that whites were complicit whether by choice or geography or for fear of reprisal.

Too many have never heard or comprehended the words "black codes," "Sovereignty Commission" or "Medgar Evers" in school or at home. I didn't know until I was 14 that Chaney, Goodman and Schwerner were killed in my hometown when I was 3, and then only because of a TV movie. My mother had taught me not to be a bigot, but she was too ashamed to tell me what the Phillips 66 attendant or our jewelry repairman had done to those three martyrs.

Inside the state, it is common to blame outside agitators or the New York media or carpetbaggers or liberals or communists or, now, Democrats. Abrogation is easier than facing the shame, asking for forgiveness, seizing a teachable moment and moving forward—which is what the flag vote really should have been about, not about whether or not it would hurt our chance at luring SUV plants. It is imperative that Mississippians stop looking for other sins to negate our own—"but Northerners owned slaves, too," or whatever—and face our own past unflinchingly. Only then can we move past the past that's not past, as William Faulkner called our frozen state. Many Mississippians are stuck in denial; collectively, we can't even applaud ourselves for how far we've come because we can't face where we really started.

All I can do is come back, write stories, and talk to people. Evers-Williams, on the other hand, can rewrite Mississippi history, and she's not likely to give up the scrap until she does. Last April, she announced the establishment of the Medgar Evers Institute in Jackson (see LaNeka Lamar's report on page 13). In Jackson. Medgar Evers, then 37 and carrying a pile of "Jim Crow Must Go" t-shirts, was shot in the back on his own carport, exactly five miles northwest of the Old Capitol building—a story Geoff Edwards captures poignantly on page 12. Evers stayed to fight because he loved his home and wanted to help it face down its demons: "I don't know whether I'm going to heaven or to hell, but I'm going from Jackson," he declared.

I, too, love this state, and I hate much of what it has done to itself and its natives. I've now accepted that our maladies can only be cured from within, and we need our young people to help reconfigure the status quo. We must challenge with positive action the outside forces that want to let the state languish in its mulishness. Since I've returned—apparently among a quiet-but-steady re-migration, bolstered in part by April 17, 2001—I've seen a resurgence of faith among those who refuse to stop believing in the state, even as flag supporters try to perpetuate the notion that the issue has been buried for good. Don't bet on it. Caring Mississippians of various races are going to talk, laugh, plan, drink, eat, volunteer and work together until that ugly symbol rots off the flag pole out of sheer irrelevance. That there's real positive Mississippi.

At the Old Capitol, Evers-Williams quoted Ecclesiastes: "Unto everything there is a season." I'd call it the long, hot season of the worthy scrap. Stay tuned.
Donna Ladd is the editor-in-chief of the Jackson Free Press.