DOSSIER: From Bashing 'Boys of Spring' to Unpacking a Mississippi-Brexit Love Affair 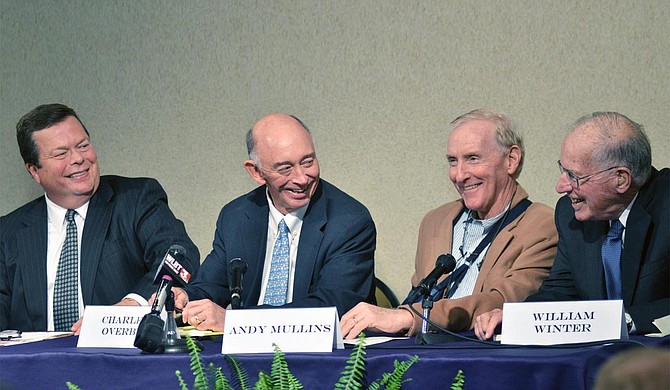 Gov. Phil Bryant stepped to the microphone at Lt. Gov. Tate Reeves' soon-to-be victory party at the Westin Hotel in downtown Jackson on election night as the Mississippi Republican Party's main hype man. Amid taunts about Democrat Jim Hood being allied with Hillary Clinton and Nancy Pelosi, and the Democratic nominee not knowing what to do with his truck and his gun, Bryant slipped in a crack that showed just how he is using the governor's mansion here as a bully pulpit for something much bigger and, to my mind, sinister.

After opening with a de rigueur anecdote about Republican godfather Ronald Reagan, Bryant suddenly mentioned William Winter's "Boys of Spring." And then he said of them: "People thought they could walk on water."

That slap at old Mississippi history drew little attention from most of the media in the room—most would have little or no memory of Gov. Winter's term in the 1980s, much less have any idea who the "Boys of Spring" were. But our investigative fellow Nick Judin sure did, as did I. He grew up in a politically astute family here in Jackson, and the comment immediately struck him, so he tweeted it.

I blinked when I saw those words. I was stunned, frankly, that even Bryant would belittle the beloved governor, who is now 96, and his group of aides—mostly prominent white men—who fought tooth and nail to pass the Education Reform Act of 1982 in Mississippi. They accomplished what seemed impossible in a horrifically inequitable and racist state for African Americans—they passed legislation to fund public kindergartens and start the state on the road to some sort of educational parity between black and white children, just 12 years after the U.S. Supreme Court forced school segregation on this state and other hold-outs.

Passing that law alone made Gov. Winter into one of our state's heroes, even as he has long admitted to being a former segregationist Democrat back before the party switch. He actually stayed with the party when it flipped into the version of the Democrtic Party that now supports our African American citizens, as the new Republican Party regressed to become the old Dixiecrats. (And, by the way, if anyone tries to dispute this party flip, tell them to go read the exhibits in both of the state-run Two Museums in downtown Jackson. It's right there in black and white.) Gov. Winter also became a leader on race relations and conversations about equity in the U.S. and Mississippi that helped create the William Winter Institute for Racial Reconciliation, originally at Ole Miss and now in Jackson, that has facilitated so many vital race dialogues in the state.

In late 1982, Gov. Winter called a special session to pass the reform law, raising taxes to pay for it. Leading up to that, he had a dynamic group of young men—Dick Molpus, David Crews, Bill Gartin, John Henegan, Andy Mullins and Ray Mabus, a future governor. The ironic part of Bryant's recent insult of them was that the "Boys of Spring" label was created as a slight, as Jere Nash and Andy Taggart wrote in their book, "Mississippi Politics: The Struggle for Power 1976-2006." Mississippi Senate Finance Chairman Ellis Bodron, and an opponent of the legislation, attached the insult to the young pro-education guns, and they all claimed it as a point of pride.

Like all should do, these men were stepping out and defying the racist role that white men are supposed to uphold here, while standing up for children of color. One of them, businessman Dick Molpus, would go on to be secretary of state, found Parents for Public Schools here (and send his own kids to public school in Jackson as PPS grew into 12 states), and actually tell the families of civil-rights workers James Chaney, Andrew Goodman and Michael Schwerner that he was sorry that Klansmen murdered them in our hometown in 1964. Molpus would eventually lose his own race for governor against racist incumbent Republican Kirk Fordice, who regularly and proudly spoke to racist groups, and later belittled Molpus at the Neshoba County Fair for apologizing for the infamous murders than helped get federal civil-rights legislation passed (and then compelled Republicans to use the southern strategy to appeal to bigotry for votes, which Ronald Reagan helped turn into an art form). 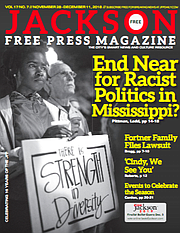 Look, I know Phil Bryant graduated from a horrifically racist Citizens Council school in south Jackson (a local historian broke that news in my newspaper) and won't talk about it, unlike other white adults who are disgusted by what they were taught in those schools, due to no choice of their own. Bryant seems content to pander to white voters in the state who are against even "adequate" public-education funding. I know he signed House Bill 1523, one of the most blatantly bigoted laws to go on the Mississippi books in recent years that even black Mississippians call the "new Jim Crow."

But I wouldn't have guessed that Bryant would hold such a grudge toward white men in Mississippi for tackling horrifically racist public schooling 37 years ago that he would bring it up in a chiding way on the night that the Republican Party officially won all statewide offices in Mississippi for the first time. He wasn't in politics in the early 1980s; he worked in law enforcement (paid by the taxpayer as he is now), as an insurance investigator and taught classes. Is revenge against that win on behalf of our state's neediest citizens still so sweet this many years later? And if so, what is that vicious euphoria about exactly?

Call me crazy, but to me, Bryant's childish quip smelled of a man taking a victory lap for helping lead the rollback of any progress whatsoever. And that kind of grudge is terrifying for our state.

The Governor and His Boys

State reporter Ashton Pittman published a cover story this week about Phil Bryant that is even more unsettling than his "Boys of Spring" quip. We reported last year that Bryant had helped facilitate an effort by "Brexit Boys" to set up a data company at the University of Mississippi. But it took Ashton's hard work and digging to put together a clearer picture of just how hard Bryant seems to be working, while on the Mississippi taxpayers' payroll, to support the controversial vote in the U.K. to exit from the European Union, much of which clearly revolves around a reaction to immigration. He talks a lot about being part of a larger movement, including here in the United States where he is the chairman of World4Brexit.

Phil Bryant is not the first Mississippi governor to actively support a state's efforts to secede from a union. But he is the first to so actively involve himself in a U.S. ally's own secession plans.

Ashton's piece is a must-read for every Mississippian, even as it is already drawing readers from around the U.S. and the world, especially the United Kingdom for obvious reasons. Many in the U.K. worry that it is a way to raise "dark money" due to the U.S.'s weaker laws about campaign donations, although Brexit boys deny that. Most comments I've seen from Mississippians so far are filled with shock at what Bryant has been up to from right here in downtown Jackson. One said simply on Facebook: "Good God."

Bottom line: Regardless of where you stand on the political spectrum, it is good to understand what your governor is up to in the state, nationally and internationally. Please read this story and share.

Realizing that I follow conversations about media and journalism closer than many of you do—it is the industry where my expertise lies—I think it is vital to point all of you to a national conversation happening right now about the revolting way several national journalism outlets covered the first day of public impeachment hearings on Wednesday.

Yowza. Twitter exploded Wednesday with outrage at such trivial and dismissive treatment of serious hearings about a president accused of trying to trade arms with a foreign leader for dirt on a political opponent. The hashtag #pizzazz (which NBC initially spelled two different ways) trended on Twitter.

If you've followed my journalism analysis, including in these Dossiers, you know already that I loathe the horse-race reporting that elevates gamesmanship over politics and elections, and leads to headlines like who was "more conservative" during a debate, rather than a deep focus on what actual issues candidates support and their specific solutions to problems that Americans and Mississippians face.

This kind of reporting gives the advantage to candidates who want to focus on the kind of petty gamesmanship Bryant used when he quipped about the "Boys of Spring" rather than talking about the positive effects he or his chosen candidates are going to have on people's lives.

Put simply: It helped create Republicans' run on statewide races in Mississippi last week that set up Bryant's "Boys of Spring" dance on stage. Horse-race reporting gave him what he wanted: full control. 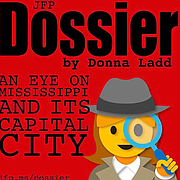 On Election Day, Bryant tweeted: "Here in Mississippi we are conservatives and we aren't tired of winning yet." But the truth is that not all Mississippians are conservative, which makes us no less Mississippian, and even many Republicans here aren't Brexit-level, "global nationalist" conservative, but horse-race reporting gives an easy forum for this kind of simplistic framing. When journalists focus on actual issues, as we all should do (see Ashton's elections coverage), it's much harder for any politicians to quip and jab their way through campaigns and win with very little focus on real issues.

Reporting on elections like they're a game also allows for terrible representation of anyone who isn't a powerful white man already. I wrote in my first piece for Dame Magazine this week about systemic sexism in the media—and specifically about that NBC reporter's top boss and how he fixated on the "dislike" of Hillary Clinton in the U.S. as his network's one mistake in covering the last presidential election—rather than giving racist birther Donald Trump an open microphone to say anything he wanted. With that kind of systemic foundation to skewed reporting, it's not really a surprise to me that one of his reporters (also a white man with much less to lose than many of us in a second Trump administration) would look at the impeachment hearings as an entertainment event to be reviewed for its drama and "pizzazz" or, of course, ratings potential, rather than the serious, solemn hearing that it is.

TV networks may live and die on ratings and people screaming opinions at each other from two "sides," but our democracy really can't take much more of this kind of dangerous political gamesmanship. We need deep reporting across communities, not divided into a fake and partisan middle, but instead allowing the factual chips to fall wherever they may, left or right.

Otherwise, there's no telling what a Phil Bryant will be standing at a microphone bragging about in another decade or two.

CORRECTION: Above, I've corrected an instance where I originally typed "U.S." instead of "U.K."

Donna Ladd is the co-founder, editor-in-chief and CEO of the Jackson Free Press. Follow her on Twitter and read her blog at donnaladd.com. Email truth-to-power story tips to [email protected].