From Man Caves to the 'Great Wall,' Bryant and Farage Head to Trump's Inauguration 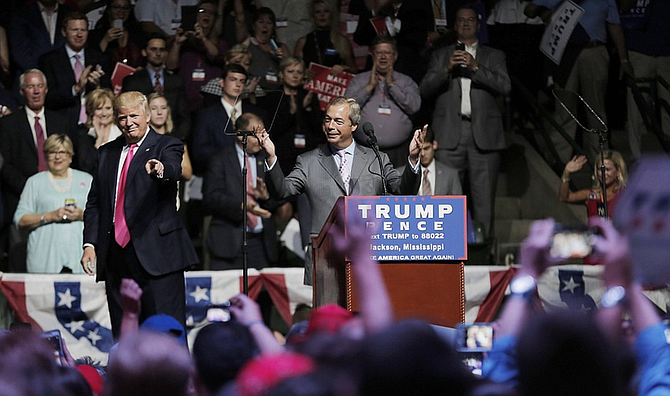 Nigel Farage of British Brexit fame spoke at the Mississippi Coliseum on Aug. 25, 2016, during a rally Donald Trump (left) held in Jackson. Gov. Phil Bryant apparently introduced Trump and Farage before the rally, and has now invited his Brexit friend to attend Trump's inauguration. Photo by Imani Khayyam. 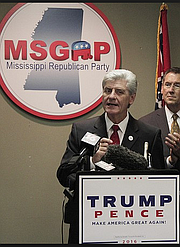 One might not think that Nigel Farage, who helped lead the Brexit "populist" movement in the United Kingdom, would need to go through Mississippi Gov. Phil Bryant to get invited to the presidential inauguration on Jan. 20. After all, Farage was at Donald Trump's side when he visited Jackson during Trump's campaign. And Farage visited with the president-elect in Trump Tower within days of the election, even sharing a photograph in the gold elevator.

The Huffington Post UK reported that Bryant had invited Farage to the inauguration, what the Brit called a “great, historic event” in an interview with Sky News. Bryant had become friends with Farage in the last year, even inviting him to hang out with him here in Mississippi in his "man cave."

"Farage attended (the) Republican National Convention in Cleveland (Ohio) in July 2016, where over drinks he struck up a conversation with the Mississippi delegation," Huffington Post UK reported.

The New Yorker reported that members of the Mississippi delegation told Farage that, “Oh, Governor Phil Bryant just loves you, Nigel! He watches all your videos!”

They then invited Farage to the Magnolia State. “The idea of a trip to Mississippi? Rather. Absolutely," The New Yorker quoted Farage saying.

Arron Banks writes in his book, "The Bad Boys of Brexit: Tales of Mischief, Mayhem & Guerrilla Warfare in the EU Referendum Campaign" that Farage drank like we think any good Brit would on his flight over the pond, then met with Bryant for a state dinner.

Then, Banks said, Farage and Bryant headed to Bryant's man cave. "In real old-school style, the ladies said goodnight and the men went into the converted garage outside, which was full of motorbikes, old Chevy cars, comfy chairs, a full bar and the best tobacco the South could offer," he wrote.

Banks says Trump met Bryant here at a reception at the Jackson Convention Complex in downtown Jackson on Aug. 25, 2016, before heading to the Mississippi Coliseum for a rally. “(Trump) strode over and gave Farage a bear hug, congratulating him on ‘a great job winning Brexit,’” Banks writes.

From Fascism to Trump Tower to Jackson

The New York-Mississippi-UK trio isn't as unlikely as it sounds. They are all conservative "populists"—often meaning really, really anti-immigrant, among other positions. Farage came under fire in Europe for a poster slamming Croatian refugees that eerily resembles photos used as Nazi propaganda.

In an interesting twist, Austria's far-right Freedom Party—a party former Nazis formed in the 1950s—later blamed Farage for the defeat of its presidential candidate, Norbert Hofer, on Dec. 4 because the British "populist" had expressed support both for Hofer winning and then calling for a vote for Austria to leave the European Union, even as the Freedom Party had long opposed the EU. Leftist candidate Alexander Van der Bellen defeated Hofer by 53 to 47 percent even though Hofer had backed down on the call for Austria to leave the EU, perhaps because a majority of Austrians did not want it.

Despite the loss of the presidency, the Freedom Party is joining forces both with Vladimir Putin of Russia and potentially the new U.S. presidential administration. Freedom Party leader Heinz-Christian Strache shared on his Facebook page that he had visited with Lt. Gen. Michael T. Flynn, Trump's designated national security adviser, in Trump Tower in New York since the election. Flynn, his son and Flynn's chief of staff have attracted attention due to their indicated public support of the "alt-right" and false conspiracy theories.

But despite all Farage's world connections, it turns out that Bryant actually introduced Farage to Donald Trump right here in Jackson.

Farage then appeared on stage with Trump at the rally and told Mississippians to follow the Brexit Brits and take the United States from the "big banks" and the professional "political class". This "drain the swamp" rhetoric seems increasingly ironic now that Trump is surrounding himself with bankers and billionaires, even the Goldman-Sachs crowd that Hillary Clinton critics on the left and the right railed against.

You wouldn't have known then, though, that the "swamp" would end up faring so well with Trump, as Farage called on Mississippians to vote against the "establishment," as he says they did in Britain.

Farage and Trump both implied here that a vote for Trump was equivalent to a vote for "Leave" in Brexit.

"My advice to you is if you want change in this country, you better get your walking boots on," Farage said. "You better get out there campaigning and remember anything is possible if enough decent people are prepared to stand up against the establishment."

A Shared Disdain for Immigration

One of the main criticisms of the British "Brexit" from those who wished to remain in the European Union was the movement's focus on stemming immigration into the United Kingdom. The new prime minister, Theresa May, has said that one of her big takeaways from the "Leave" vote is that the Brits wish to see "a reduction in immigration," the BBC reports. This sentiment fits well with the exclusionary immigration policies Trump has pushed throughout his campaign, including building a wall between the U.S. and Mexico, as well as those Bryant has heralded in Mississippi.

In 2006, then-State Auditor Bryant commissioned a report in Mississippi finding that undocumented immigrants cost state taxpayers millions of dollars based on "significant education, law enforcement and health care costs, as well as substantial lost tax revenues and other economic losses." The report states in its introduction that it is not a comprehensive analysis, but Bryant and others have used the document to support immigration crackdowns since then. He also also signed onto lawsuits against President Obama's efforts to help young undocumented immigrants.

"Hillary Clinton only talks about the separation of families who choose to come here illegally, (but) I want to focus on the American families who've been permanently separated from their children because of the sanctuary cities and open borders that Hillary Clinton so strongly supports," Trump said Wednesday. "Where is the sanctuary for American children; where is that sanctuary?"

Now, the three men are D.C.-bound to celebrate a rather large win for their shared ideology, even as Trump has started plans for what he calls the "Great Wall" along the Mexican border.

The three should have much to celebrate in Trump's new Man Cave on Pennsylvania Avenue.