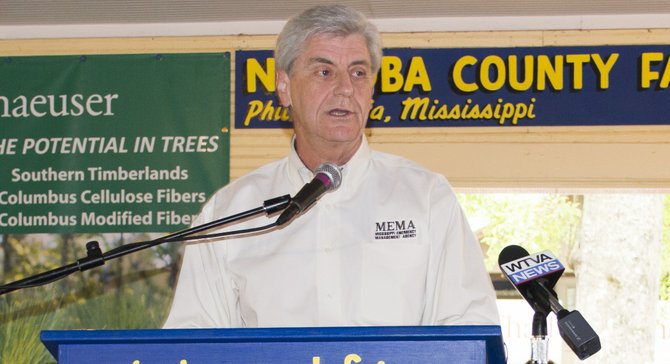 Gov. Phil Bryant wants to shut down a program that started 34 years ago to help immigrants who fled Cuba after Fidel Castro seized power. Photo by Trip Burns.

For some people, it's snakes; for others, spiders. And yet others have absolutely crippling fear of buttons (koumpounophobia). Gov. Phil Bryant's biggest phobia clearly is that a bunch of people are trying to sneak into Mississippi. This is evidenced in his recent stated opposition to a program that places a handful of immigrant children in foster and group homes around the state each year.

There are currently 27 participants in the program, but Bryant believes that President Barack Obama wants to use the program to flood Mississippi with children who arrived in the U.S. illegally through Mexico.

Bryant laid out his rationale to Mississippi Public Broadcasting recently.

"This program started after the Vietnam War to bring Vietnamese children over here. ... Many of the children that are coming now are from areas like Venezuela and El Salvador and Mexico, the same countries that we see children flooding into the United States. I want to make sure that these two programs are not being blended and if it takes terminating that program or suspending it until we can make certain of that, I am willing to do that," Bryant told MPB.

Bryant's fears appear to be without basis in rationality. The children who participate in the program, who are come from war- and disaster-torn countries, receive refugee status from the United Nations, giving them legal immigration status, explains Greg Patin, executive director of Catholic Charities in Jackson.

From there, the charity recruits foster families to place children with or places them in a group home that houses eight boys who come from countries in Central America, Burma, the Democratic Republic of Congo and Zambia. Like other kids, the children attend local schools, and the charity provides tutors if necessary as well as support from cultural specialists who help with the transition to a new country.

"They generally know very little English when they get here, but they learn so fast," Patin said, adding that the children also receive therapy and case management through the charity.

Bryant, who is Methodist, met with several faith leaders Sept. 4 for what a statement from the Catholic Diocese of Jackson called a cordial meeting. Officials declined to discuss the meeting at length, but said through a statement that Bryant "was assured the Unaccompanied Refugee Minor program operated by Catholic Charities for 34 years serves refugee children coming into the country legally from a number of countries across the globe" and that Bryant "promised to carefully consider the situation."

This isn't the first time Bryant has put his toe in the waters of international affairs.

On July 18, Bryant sent a letter to President Obama expressing outrage at the U.S.' growing trend of taking in and helping migrant children. It began: "I am writing to express my deep concern regarding the ongoing crisis at the United States' southern border. Illegal aliens—many unaccompanied children—are flooding into our country in record numbers."

Despite the fact that Obama has also deported people in record numbers, Bryant has often locked horns, albeit unsuccessfully, with the White House over immigration policy.

In 2012, a group of Immigration and Customs Enforcement agents sued then-U.S. Department of Homeland Security Secretary Janet Napolitano over Obama's executive order that ended the practice of deporting young people whose parents brought them to the U.S. illegally as children. The agents, who were represented by Kris Kobach, Kansas' controversial secretary of state who is credited with helping develop anti-immigrant legislation in several states, claimed that the new policy prevented them from fulfilling their sworn duty.

In October of that year, Bryant joined the lawsuit on the state's behalf, making Mississippi the only state to be a plaintiff in the federal suit, filed in Texas. In July 2013, U.S. District Judge Reed O'Connor dismissed the suit because the district court lacked jurisdiction.

Bill Chandler, executive director of the Mississippi Immigrant Rights Alliance, which is providing legal services pro bono to some of the children in the program, said Bryant's latest move is part of Bryant's long history of using immigrants as a punching bag to score points with his conservative political base.

At the time, Bryant estimated that 49,000 "illegal aliens" resided in the state.

The Pew Hispanic Center placed the number of undocumented immigrants at 45,000 in 2010. Contrary to Bryant's assertion, however, unauthorized residents are not eligible to access such government benefits as Temporary Assistance for Needy Families (TANF), Medicaid or the State Children's Health Insurance Program (SCHIP).

"Phil Bryant will do things and say things without thinking—and that's being kind," Chandler said.

27 more will NOT flood Mississippi. Heck, I hear Spanish being spoken all over the Jackson area now, more so than 5 years ago. I don't know if they are legal or illegal in the country. In hearing them talk to one another, they appear to be gainfully employed, have families, and are engaged in family life, sports, or their church.

What we really need to do is get Congress off their $157,000 per year duffs and debate (robustly) the immigration issue, take a vote, and set policy so the country can move on beyond this point, and other countries can just pipe down with the racism and xenophobic comments once we do. The world wanted a decision, they got a decision. Political decisions are never "right" or "wrong," but just in the moment. Time is needed to check the correctness.

The article says Governor Bryant "believes that President Barack Obama wants to use the program to flood Mississippi with children who arrived in the U.S. illegally through Mexico."

It never explains why his fears about the program are unfounded.

Athan, I don't believe Governor Bryant fears are necessarily unfounded when you consider there are an estimated 12 to 14 million in the US illegally; however I don't think 27 children is a flood. Also, it is mainly his own national Republican Party that is holding up immigration reform. The Democrats have given them all that they asked for in the bill and they still did not pass it.

Over 50,000 children entering the US illegally in one year is what I would consider a "flood".

You have a point, but the specific point being made was as a Governor articulating a state policy, and the facts related to Mississippi would not support his conclusion.

Where are ya'll hearing just 27? Last report I saw there have been 202 unaccompanied illegal immigrant children released to family and sponsors in Mississippi since July while waiting for their immigration hearings dates to come up.

1. 27 children are not how many that are coming ..... 27 are how many already in the program. "There are currently 27 participants in the program, but Bryant believes that President Barack Obama wants to use the program to flood Mississippi with children who arrived in the U.S. illegally through Mexico." At last count there were hundreds of children coming into the US from Mexico and some of them are even sick.

2. With more children in the program they are going to need money from some where... I don't know about you but I can't afford higher property taxes. I am on a fixed income and my taxes are at $1200 dollars a year now.....that is more than I draw a month now....and at this rate it will in the end making a lot of homeless elderly or disabled people because of taxes people.....WAKE UP!!! Who do you think pays for Mexican children to go to school in our local schools system, not their parents as they don't pay property taxes, but you and I do where they get free lunches and don't have to pay any school fees at all....and I don't even have a child in school but have to pay school taxes....county and city!

3. There are so many Mexicans in our town that the doctors, nurses, schools and law enforcement have been forced to learn their language..... I put up and American flag and my POW flag on labor day and was told by law enforcement I had to remove the American flag because it would offend them.... The local post office was flying a MEXICAN FLAG...not AMERICAN FLAG and when I said something the post master told me to "please be quiet that the least amount of people that realized what flag was flying the better"....and I don't know about you but that offends me. I have worked hard in and for this country in military and law enforcement and I don't like it.

4. I have lived and worked in Mexico and followed the rules when I lived there....I think they should follow rules when they come here....and learn the English language first off. Not be given free hand outs and believe me they get them....saw one with food stamp card yesterday couldn't speak a word of English and didn't have a green card (Had to have legal ID in order to send money out of country) but had food stamp card....and a shopping cart full of food. Saw same couple later that day trying to tell a money transfer person they wanted to send money ($4000.00) back to Mexico...so why did they have a food stamp card if they had that kind of money? Again people WAKE UP!!!

I don't believe #3, mainly because it would be illegal to do that in front of a Federal Post Office. Also, flying an American flag on your own property provided you follow the rules is not any business of law enforcement. I think you made that up. I know of no town or city in Mississippi that has such a large population of illegal Mexicans that local officials would act this way. And if they are doing this, I want to know the name of the town or city.

"Phil Bryant will do things and say things without thinking—and that's being kind," Chandler said.

Funny, I would say the same thing about Bill Chandler, and that is being very kind!