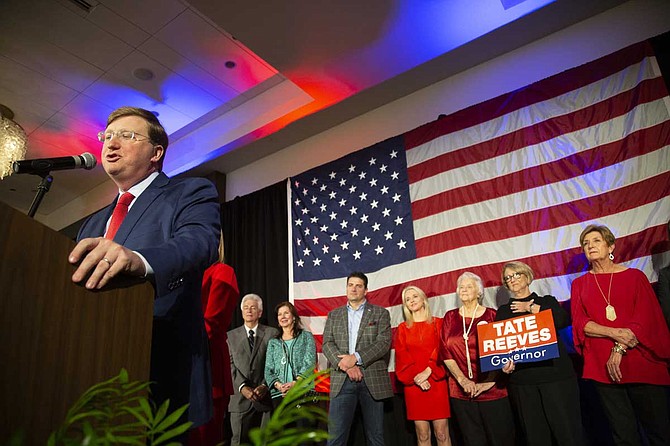 JACKSON—With his Southern Baptist pastor standing beside him at the King Edward Hotel in Jackson, Democrat Jim Hood conceded defeat in the race for Mississippi governor, reiterating his religiously inspired campaign theme of fighting for “the least of these” in policy areas like health care and education.

Nearby at the Westin, though, Republican Gov.-elect Tate Reeves seemed to soften his position on expanding Medicaid—which he has long opposed—as he celebrated his win on Tuesday night alongside a slate of fellow GOP victors.

“We’re going to work with the lieutenant governor and the speaker of the House on every issue that’s out there. We have every intention of working with them to ensure that we get good things done for the people of Mississippi,” said the the governor-elect, when Jackson Free Press reporter Seyma Bayram asked him if he would work with Lt. Gov.-elect Delbert Hosemann on expansion.

Expansion would open the program up to around 300,000 more Mississippians in working households that make too much for traditional Medicaid but not enough for federal subsidies or to pay for private insurance. On the campaign trail and during his time as lieutenant governor, Reeves outright rejected the idea, saying he was “against Obamacare expansion,” as he called it, referring to the fact that it is part of the former president’s signature health care law, the Affordable Care Act.

In January, Hosemann, a more moderate Republican, will replace Reeves as lieutenant governor, a position that includes executive powers and whose holder also serves as president of the Mississippi Senate. In that role, Hosemann will have the power to appoint committee chairs and to decide which legislation is prioritized—and which legislation dies.

Hosemann, who is currently the secretary of state, cruised to victory on Tuesday night with 60% of the vote against Democratic opponent Jay Hughes, an Oxford-area state representative. In his race, Reeves beat Hood by a narrower 52-to-47 percent margin.

On the campaign trail, Hosemann called for Medicaid expansion, saying the State should accept over $1 billion from the federal government each year that would pay for it. Declaring victory Tuesday night, Hosemann vowed to go to work on an agenda that includes not only addressing the state’s rural health-care crisis, but public education, roads and bridges.

“I am proud of the positive, issue-driven campaign we ran, and I am so grateful to voters for instilling their confidence in me. We have real challenges in Mississippi, and our team has concrete plans to address them,” Hosemann said.

“We will not let our foot off the gas and we will not let you down. Now, the real work to make Mississippi an even better place for our children and grandchildren begins.”

Mississippi Sen. Michael Watson, R-Pascagoula, will take over for Hosemann as secretary of state when the men assume their new roles in January. Among other things, the secretary of state oversees the state’s campaign-finance system, election processes, and trains local-level poll workers.

Watson, who rose in Mississippi politics as a Tea Party conservative, has vowed to implement a system to check Mississippians’ citizenship status when they register to vote, though he has not provided evidence that non-citizen voting or voter registration is a problem in the State.

Watson also told the Jackson Free Press in August that he wants to make it easier for residents to search campaign-finance filings. He also said he would like to see more frequent filings during the legislative session so that Mississippians can see if donors might be influencing lawmakers’ votes.

In a press release Tuesday night, the Republican Governors Association congratulated Reeves, praising him as an “innovative, vibrant leader with an unparalleled understanding of the issues that are important to Mississippians and a bold agenda to move the state forward.”

But during the 10-month course of his campaign, Reeves only unveiled two policy proposals: A plan to spend $100 million on technical and career programs in high schools and community colleges and a plan for a $4,300 teacher-pay raise.

Reeves hastily announced the teacher-pay raise plan in October, as his campaign feared he was losing public-education supporters to Democrat Jim Hood, whom the Mississippi Association of Educators had endorsed. During the legislative session in the spring, Reeves killed a $4,000 teacher-pay raise, arguing that the State could afford no more than $1,500.

On Monday, teachers around the State received an email from Reeves, though, promising to support them.

“Over the past several years, Mississippi has made incredible strides in education. … During my tenure as Lieutenant Governor, we were able to increase pay for teachers several times, but never as often or as much as I would have liked,” he wrote in an email sent to teachers’ public email addresses.

“In fact, I believe no teacher in Mississippi makes what he or she is worth. We had to make tough decisions, but those decisions have put Mississippi in a financial position to pay our teachers significantly more than what they are receiving today.”

Hosemann has already committed to raising teacher pay as a candidate. At the Neshoba County Fair, he also called for universal pre-K to ensure that all children across the state start off on the same foot.

Fitch is First Woman to be Attorney General

Tuesday night was the first time since 1876 that Republicans swept all eight statewide offices in Mississippi.

Republican State Treasurer Lynn Fitch will become the new attorney general, taking over from Democrat Hood, who had held the office since 2003 until he decided to run for governor this year. Fitch is the first woman to hold the position.

She will have to decide whether or not to further investigate and possibly bring charges against Reeves, who prompted an investigation after his office pressured the Mississippi Department of Transportation to pursue a frontage-road project that would connect his private community to a nearby shopping mall. Because he was Reeves' opponent, Hood left charging decisions up to the next attorney general.

Fitch beat former ACLU Executive Director Jennifer Riley Collins, an African American woman who, despite running on a progressive slate of issues contrary to the conventional wisdom in Mississippi, managed the second best showing of the night among statewide Democrats, drawing more votes than any Democratic candidate not named Jim Hood.

African Americans make up 38% of the population in Mississippi, the highest percentage in any state in the U.S., but all eight of those new leaders are white. Mississippi has not elected a black statewide official since Reconstruction. Democrats nominated black candidates in the races for attorney general, secretary of state, insurance commissioner, and treasurer.

Conceding to Reeves, Hood said he was grateful for the time he had been able to serve the State.

“The Lord has allowed me to serve people in the state of Mississippi for 24 years, and it’s been a good run. I guess it was not his will that we continue on as governor,” said Hood, the last Democrat still holding statewide office.

“The people in my area up there that I’ve known for years, they decided that partisanship was more important than friendship,” Hood said. “I don’t know what the results of it are, I just know we had an opportunity to really do some things with the kids, our young people, and hopefully Governor Reeves will do some of those things.”

Pockets of Hope for Democrats

There were pockets of hope for Democrats, though.

In House District 68, which is part of Hinds, Democrat Zakiya Summers will be the new representative after winning 75% of the vote. Her party already controls that seat.

Democrats also flipped the Republican-held Mississippi Senate District 22, which had to be redrawn after a federal judge ruled earlier this year that it amounted to a racial gerrymander that disenfranchised black voters. Joseph, who is African American, previously held the seat before redistricting. He defeated Republican Hayes Dent 52-to-48.

The Trump Factor, More or Less

On Tuesday night, the head of the national Republican Party, Chairwoman Ronna McDaniel, attempted to give President Donald Trump credit for Reeves’ victory.

“Reeves was down double-digit, but @realDonaldTrump came in big with his endorsement and rally, putting him over the top. A huge win for the President and our Party,” McDaniel tweeted.

True enough, Reeves spent much of the campaign focused, not on issues, but on getting out the message that he is a supporter of the Republican president, and that his opponents—Republican Bill Waller in the Republican runoff and Hood in the general—were not. Trump and Vice President Mike Pence did pay last-minute visits to the State to help pull Reeves over the finish line.

But no public or known private polls ever showed Reeves down by more than single digits. Throughout the year, polls showed a tight race. During his rally with Reeves in Tupelo, Trump said it was “embarrassing” that the race was so close.

Espy, who was at Hood's watch party on Tuesday night, is preparing for a rematch against Hyde-Smith when her seat is up again in 2020.