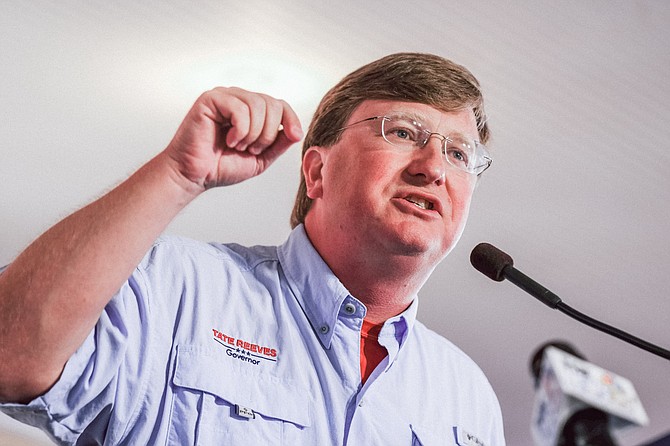 All “elective surgeries,” including abortions, could cease in Mississippi for the next two weeks under a new executive order, Gov. Tate Reeves announced Friday. The governor claimed that the move will free up personal protective equipment for hospitals to use as they deal with an escalating number of COVID-19 cases statewide.

“We have to make sure we have adequate supplies of PPE so that health-care workers can safely tend to those patients that are in our hospitals,” Reeves said in a live streamed press conference this afternoon, as the number of confirmed novel coronavirus cases climbed to 2,469.

At one point in the livestreamed press conference, one reporter asked Reeves to clarify whether the temporary ban on elective surgeries includes abortions.

“It shuts down all electives surgeries,” replied Reeves, a Republican who has long campaigned on and championed laws designed to outlaw or restrict abortion in the state, including last year’s six-week ban that is currently being litigated in federal court.

In a statement to the Jackson Free Press on Friday afternoon, Staci Fox, the president and CEO of Planned Parenthood Southeast, criticized Reeves’ order.

Fox pointed to a statement that the The American College of Obstetricians and Gynecologists released jointly with the American Board of Obstetrics & Gynecology on March 18, calling abortion an “essential component of comprehensive health care” that is "time-sensitive.”

“While we are all concerned about this global pandemic, we must continue to trust women and their doctors informed by public health experts to make these health care decisions, not politicians,” Fox said on Friday.

Executive Order No. 1470 dictates that “all licensed health care professionals and all licensed health care facilities shall postpone all surgeries and procedures that are not immediately medically necessary to correct a serious medical condition of, or to preserve the life of, a patient who without immediate performance of the surgery or procedure would be at risk for serious adverse medical consequences or death, as determined by the patient's physician."

The order says it "may be enforced by all State, County, and Local law enforcement, as well as other governmental entities (such as State and local departments of health) to the fullest extent under Mississippi law… .”

The order makes an exception in certain cases, stating that "this prohibition shall not apply to any procedure that, if performed in accordance with the commonly accepted standard of medical practice, would not have the potential to deplete the hospital capacity, medical equipment or PPE needed to cope with the COVID-19 disaster." However, the Mississippi State Department of Health on April 5 recommended that all health care professionals begin wearing face masks, a crucial form of PPE that is in short supply.

Reeves said he made the decision to ban elective procedures in consultation with MSDH and Dr. Thomas Dobbs, the state health officer.

As lieutenant governor and president of the Mississippi Senate from 2012 until he assumed the governor’s office this January, Reeves helped shepherd through a number of bills aimed at reducing abortion access in the state, like last year’s “heartbeat law,” the six-week ban. On the day former Gov. Phil Bryant signed the law, Reeves beamed alongside him, telling the press that it was “a very important day in the history of Mississippi,” as he committed to “continue to fight to make Mississippi the safest place in America for an unborn child.”

The ban is not the first controversial move Reeves has made this month. On April 3, the Jackson Free Press first reported that Reeves signed a proclamation declaring that April is “Confederate Heritage Month,” celebrating the four-year period when Mississippi seceded from the Union in order to preserve slavery. Days later, MSDH confirmed that black Mississippians make up a disproportionate number of COVID-19 deaths and cases in the state, which has proven true in other states across the country.

On April 8, two days before Gov. Reeves signed Executive Order No. 1470, he told right-wing radio host Tim Wildmon on American Family Radio that he was working on an order that would temporarily ban abortions during the COVID-19 crisis. The governor said he was basing it on a similar March 22 order in Texas that barred "elective procedures," including abortion, until late April. The 5th U.S. Circuit Court of Appeals ruling that upheld the Texas ban, Reeves said, was a "guide" for how Mississippi could pass its own temporary abortion ban without getting blocked by the 5th Circuit, which hears cases in Louisiana, Mississippi and Texas.

“As soon as we got it, our lawyers have been reviewing it, looking at it, because we want to make sure we have a similar order that meets the guidelines as set forth by the court,” the governor told Wildmon on April 8. "Because one of the things we have found over the years is that Mississippi’s laws would ensure that we are the safest place in America for an unborn child. That’s something we want to continue, but now we have guidance.”

UPDATE: After the Jackson Free Press broke this story, the U.S. 5th Circuit Court of Appeals made an additional ruling, allowing medication abortions to proceed in Texas. Since, Mississippi Gov. Tate Reeves has not tried to assert his own order to shut down the State's lone abortion clinic, which has continued to provide abortions.