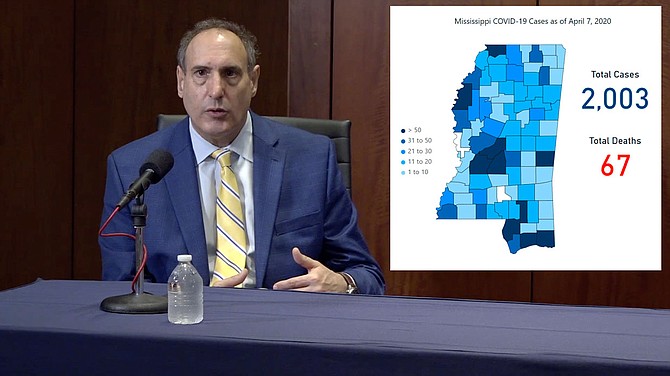 More than half of all Mississippians currently diagnosed with COVID-19 and nearly three-fourths of the virus’ current casualties are African American, the Mississippi State Department of Health revealed today. The race demographics confirm fears that the impact of the virus will be disproportionately distributed amongst the state’s black communities.

Racial demographics for testing totals have yet to appear on MSDH’s daily breakdown. That information may take time to discern. Rep. Jarvis Dortch, D-Jackson, said in a morning interview that State Health Officer Thomas Dobbs communicated to him that “around a third” of lab reports did not mention the patient’s race. Some clinicians reaching out to the Jackson Free Press on background confirmed that their reporting mechanisms for COVID-19 testing at private labs do not include ethnicity. Data for confirmed infections and fatalities, Dortch said, is likely still demographically accurate.

“I’m almost speechless. As quickly as we can, we need to try to intervene to slow the trend,” Turner-Ford said in an interview with the Jackson Free Press, adding that without a more aggressive testing regime, the state’s current understanding of the spread of COVID-19 may speak more to pre-existing health disparities than the virus’ actual extent.

“I do think that what we’re seeing is based on the underlying health of Mississippians that have contracted the virus. Chronic health conditions, like high blood pressure, diabetes, that’s going to dictate how your body responds to the virus,” she said this morning

MSDH data back up Turner-Ford’s analysis. Alongside the racial trends in COVID-19 infections and mortality, the state health agency released a breakdown in fatalities by underlying conditions, also sorted by race. Virtually all the state’s deaths so far have occurred in patients with comorbidities, including but not limited to cardiovascular disease, lung disease, renal disease, hypertension and diabetes. Racial disparities persist in these comorbidities as well, Dortch said.

“We know that the black community lacks access to affordable healthcare,” Dortch said, including preventative care, adding that the state has under-invested in health care and social services, which could reduce the spread of these conditions. “Mississippi works hard to stay in last place. It takes a lot of effort to have the kind of inequalities we have in this state,” Dortch said.

Mississippi Senate Minority Leader Derrick Simmons, D-Greenville, told the Jackson Free Press in an interview that COVID-19 highlights the stark failures of the American healthcare system. “COVID-19 is consistent with what healthcare officials and politicians and pundits already know about this country as it relates to health. We are in a state of healthcare denial,” Simmons said, adding that “For the African American community, it’s even worse.”

Simmons joined Turner-Ford and Dortch in calling for a thorough examination of the socioeconomic dimensions of the crisis. “I would like to see the data regarding those individuals who had access to healthcare out of the 56% of cases and 72% of fatalities in Mississippi who are African American,” Simmons said.

“Our black community is disproportionately working in jobs exposed to the public. We’re working in retail jobs, frontline jobs for the government,” Dortch said. Many black Mississippians, he explained, did not have the privilege of an office job which allowed some measure of social distancing.

“I believe that (it relates) to socioeconomic status, if you’re not healthy, if you don’t have the resources to seek proper medical treatment, when something like coronavirus comes across, you can just expect the most horrific outcomes,” Turner-Ford said.

"We could’ve created 9,000 plus jobs in the health care industry. And while we’re looking at a shortage of PPEs and ventilators, what we’re overlooking is the personnel needed in this crisis. If we would have expanded Medicaid, at the very least we would have had more heroes on the ground to fight this crisis,” Simmons said. The senator from Greenville called on state leadership to acknowledge the extent of this crisis, and to take action. “It’s time for Mississippi leaders to stand up and be the Christians that they profess to be,” Simmons said.