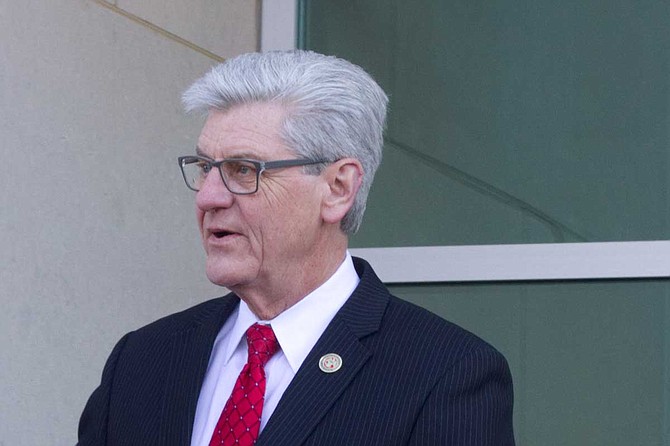 JACKSON — With Mississippi House Speaker Philip Gunn and Lt. Gov. Tate Reeves at his side, Republican Gov. Phil Bryant signed the nation's most restrictive abortion bill into law on Thursday morning. It bans abortions after doctors can detect a fetal heartbeat, which typically happens around six weeks gestation—before most women know they are pregnant. It includes no exceptions for rape or incest.

"From education to safety to health care, it is the child we are fighting for here in Mississippi," Bryant said at the signing ceremony. "And Senate Bill 2116 begins doing that at the earliest possible opportunity."

Bryant then welcomed Reeves, who is running for the Republican nomination for governor in this year's elections, to speak. Reeves called it a "very important day in the history of Mississippi" and made a commitment to Bryant to "continue to fight to make Mississippi the safest place in America for an unborn child."

Under Bryant and Reeves' watch, though, Mississippi remains the deadliest state in the country for babies after they are born. In 2016, nearly nine out of every 1,000 children born alive in the state died in infancy—a statistic that amounts to nearly 1 percent. That number is up since 2014, when it was 8.2. The national infant mortality rate is 5.6.

Separately, a 2018 report from the United Health Foundation found that Mississippi is the second deadliest state in the country for all children ages 1-18, and that mortality rate worsened between 2015 and 2016. The state is the worst in the nation when it comes to clinical health services for children, and the UHF also found that Mississippi is the least healthy state overall for women, infants and children.

During his tenure, Bryant has repeatedly rejected billions of dollars in federal funds to expand Medicaid, which could save rural hospitals in danger of closing and extend health-care access to an additional 300,000 Mississippians.

The night before he signed the six-week ban, Bryant appealed to a higher power as he responded to the Center for Reproductive Rights, which threatened to sue to stop the law from taking effect.

We will all answer to the good Lord one day. I will say in this instance, “I fought for the lives of innocent babies, even under threat of legal action.” https://t.co/4bHEmCqN74

"We will all answer to the good Lord one day. I will say in this instance, 'I fought for the lives of innocent babies, even under threat of legal action,'" Bryant tweeted Wednesday.

"We will all answer to the good Lord one day. I will say in this instance, 'I fought for the lives of innocent babies, even under threat of legal action,'" Bryant tweeted Wednesday.

"Jesus clearly says in Matthew 25 to feed the hungry and care for the sick, for when we do these things, we do them unto Jesus," she said. "He also says that it is better to have a stone tied around one's neck than to cause a child to stumble. Gov. Phil Bryant may fight for the life of the unborn, but until he can stand and say that he fought for the lives of the living, he is simply spouting off lies and setting our children up to stumble."

In Mississippi, the infants most likely to die post-birth are disproportionately African American. The state has the highest maternal mortality rate in the country, and similarly, black women are more likely to die during childbirth than white women.

Laurie Bertram Roberts is the co-founder and director of The Mississippi Reproductive Freedom Fund, the state's only abortion fund. After Bryant's tweet Wednesday, she called him a "liar" and accused him of doing "nothing to make black birth safer" for African American women and babies.

"Only a failed leader can work to pass an unconstitutional abortion ban for easy points with his base instead of doing hard work to improve the lives of living, breathing children," she tweeted Wednesday. "Where are the jobs, infrastructure, healthcare, education funding, public health funding?"

Last year, Bryant was at a press conference defending Sen. Cindy Hyde-Smith for comments she made about how she would be "on the front row" of a "public hanging" when he suggested that black women are participating in the "genocide" of black children.

"See, in my heart, I am confused about where the outrage is at about 20 million African American children that have been aborted," he said. "No one wants to say anything about that. No one wants to talk about that."

In an interview with the Jackson Free Press shortly after the governor made those comments, Roberts rebuked him.

"To commit genocide, you have to be trying to eliminate a race of people," she said. "By definition, that cannot be black mothers. The majority of women who have abortions are also mothers. ... Number two, Phil Bryant has never made a policy or endorsed a policy that helps black babies in this state."

At the signing ceremony for the six-week ban on Thursday, Gunn, the Republican House Speaker, promised to continue the fight against abortion, regardless of any legal challenges.

In January, the House introduced its own nearly identical "heartbeat bill," but Legislators ultimately decided to rally around the Senate version. That affords Reeves a campaign talking point because, as lieutenant governor, he also serves as president of the state Senate.

Last year, the Legislature passed a 15-week ban that federal courts struck down. With Brett Kavanaugh now on the Supreme Court, though, Republicans hope anti-abortion laws like the one the governor signed today will not only survive court challenges, but help overturn Roe v. Wade, the 1973 Supreme Court case that declared abortion a constitutionally protected right.

At the signing, Reeves said there was "a lot of pressure" from groups "primarily outside our state." The heartbeat bill, though, is also from outside Mississippi. National anti-abortion groups have worked with Republicans to introduce heartbeat bills in states all across the country this year, including Georgia, Ohio, Tennessee, Florida and South Carolina.

Only House one Republican, Hattiesburg Rep. Missy McGee, voted against the six-week ban. In a Facebook post after the initial vote last month, she explained that, while she considers herself "pro-life," she could not "support legislation that makes such hard line, final decisions for other women."

"This was a bill that was pushed through committee last week at the 11th hour on a deadline day," she wrote. "No hearings. No exceptions for rape or incest. No exceptions for if a 100% fatal genetic abnormality is found later in the pregnancy."

Since 2012, Mississippi has spent more than $200,000 defending anti-abortion laws. At the signing ceremony Thursday, Reeves pledged to spend whatever it takes to defend the law.

"I have absolutely no problem supporting whatever it costs to defend this (legislation) because I care about unborn children," he said.

In 2011, Mississippi voters rejected the Personhood Amendment, which would have banned abortions, even in cases of rape or incest, and some forms of contraception. In the same election, voters first sent Bryant to the governor's mansion and made Reeves lieutenant governor.