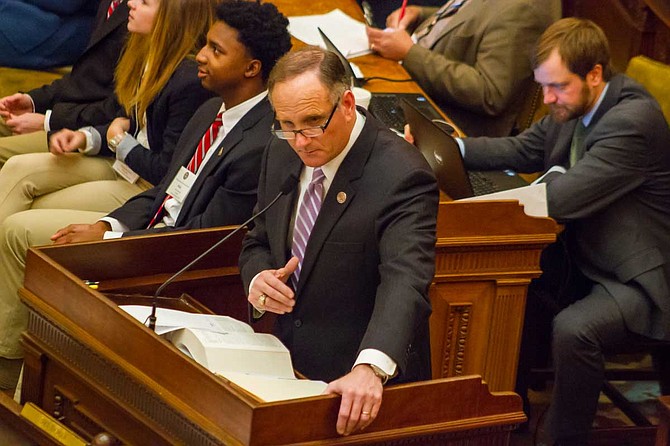 State Rep. Mark Baker, R-Brandon, pledges to take the fight for Mississippi's six-week abortion ban all the way to the Supreme Court if voters elect him as their next attorney general. Photo by Stephen Wilson.

JACKSON — State Rep. Mark Baker, a Republican candidate for Mississippi attorney general, is pledging to take the state's recently passed abortion ban all the way to the Supreme Court. The law bans abortions once a heartbeat can be detected, which is usually around six weeks—before most women know they are pregnant.

"This is a common sense bill that prohibits abortions once a fetal heartbeat is detected," Baker said in a press statement on Monday. "Mississippians overwhelmingly support it, and most Americans support protecting and preserving life. If I'm elected Attorney General, I will join with other conservative attorneys general across the nation fighting to protect life in federal court, even the highest court."

Gov. Phil Bryant signed the law on March 21. Already, the Center for Reproductive Justice has filed a lawsuit arguing that it violates women's constitutional rights.

Since 2012, Mississippi has spent more than $200,000 defending anti-abortion laws. Last year, Bryant signed a law banning abortions after 15 weeks. A federal court struck it down, but current Attorney General Jim Hood appealed it to the 5th Circuit Court of Appeals, where it waits in limbo.

At the new law's March 21 signing ceremony, Lt. Gov. Tate Reeves, a Republican running for the termed-out Gov. Bryant's position this year, pledged to spend whatever it takes to defend the law if elected.

"I have absolutely no problem supporting whatever it costs to defend this (legislation) because I care about unborn children," he said.

This year, multiple states, including Georgia and Ohio, have also introduced heartbeat legislation. The push comes after President Donald Trump replaced Justice Anthony Kennedy with Brett Kavanaugh, who is more conservative. With Kavanaugh on the court, some anti-abortion activists believe they have a shot at overturning Roe v. Wade, the 1973 Supreme Court ruling that declared abortion a constitutional right.

If elected, Baker will use his position as Mississippi attorney general to back Trump, he said.

Last year, Laurie Bertram Roberts, who is the co-founder and executive director of the Mississippi Reproductive Freedom Fund, told the Jackson Free Press that she thinks laws like the 15-week ban are part of an effort to get a case before the Supreme Court in hopes of overturning Roe v. Wade.

It is no accident that the "heartbeat bills" flooded state legislatures in 2019, she told the Jackson Free Press on Tuesday.

"The strategy is already national. It always has been," she said. "That's why you see the same bill over and over across the country. This is model legislation that has been shopped around aggressively since at least 2011. Mark Baker and others should spend less time grandstanding and pandering, and more time working on issues that help children and families struggling everyday."

In the Jackson federal court that struck last year's 15-week ban down, Justice Carlton Reeves suggested much the same.

"(T)he real reason we are here is simple," Reeves wrote in his ruling last year. "The State chose to pass a law it knew was unconstitutional to endorse a decades-long campaign, fueled by national interest groups, to ask the Supreme Court to overturn Roe v. Wade."

During debate over this year's six-week ban, Republican legislators did not try to hide a similar motive. When asked about the cost of defending it in court, state Sen. Joey Fillingane of Sumrall and state Sen. Chris McDaniel of Ellisville said it would be worth it, and suggested that, thanks to Trump's makeover of the Supreme Court and other federal courts, anti-abortion legislation now stands a chance.

Coleman Boyd, an anti-abortion activist who often protests along with his children outside the Jackson Women's Health Organization, Mississippi's only abortion clinic, considers Lt. Gov. Tate Reeves and Baker's words empty. He believes politicians should not "bow down before nine Supreme Court justices" and considers abortion immoral at all stages—even before six weeks.

"Tate Reeves is running for governor, so they put that out so he can get elected for governor," Boyd told the Jackson Free Press on April 16. "True justice would say, 'We're making this law. Federal government, this is not your business. Stay out of the state of Mississippi.'"

He said he does not believe Republican claims that more conservative justices will lead to the end of abortion.

"That's what they've been saying for 46 years. Do you know why they always fight against true bills of (abortion) abolition?" Boyd said. "Because no matter how much I might despise things in the Republicans no matter what they do, I'm always willing to give them another vote because I always need another Supreme Court justice. It's a hamster wheel. They say that to keep people running on it to get votes, but nothing's going to happen on it. That's all political gamesmanship."

Bryant and Reeves' pride and joy of the 2019 legislative session, the heartbeat bill, is "wicked and unjust," Boyd said.

Boyd's views go beyond most anti-abortion activist's views, who often make exceptions for rape or the life other mother, and usually do not advocate for punishing women who have abortions. A "just law," he said, would punish women who have abortions and doctors who perform them the same way it would punish a woman and the hitman she hired to kill her 2-year-old child.

That is why he cannot support the "heartbeat bill," he said.

"It'd still be an unrighteous bill if it went through (the courts)," he said. "We are making a law that says it's legal to kill your children up to 6 weeks. Well that is wicked. Even if it saves babies, it is a wicked thing."

In 2011, Mississippi voters rejected the Personhood Amendment, which would have banned abortions, even in cases of rape or incest, and some forms of contraception. In the same election, voters first sent Bryant to the governor's mansion and made Reeves lieutenant governor.