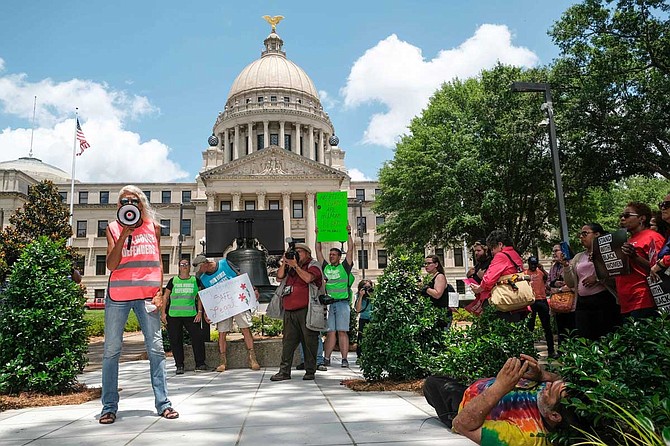 Derenda Hancock leads a group of “clinic escorts” at the Jackson Women’s Health Organization, the state’s only abortion clinic. The escorts help patients avoid anti-abortion activists as they enter the clinic. Photo by Ashton Pittman.

"The antis are here," Kim Gibson whispered to Derenda Hancock, who had been watching former state Sen. Gloria Williamson tell a sympathetic crowd gathered outside the Mississippi State Capitol about a pregnancy that nearly took her life in the days before most abortions were legal in Mississippi.

Hancock looked up, sunglasses covering a third of her face and her wavy blonde hair hanging down over a bright pink worker vest with the words "Pink House Defenders" emblazoned across it. Not far in the distance, a middle-aged man in a red hat and mint green sleeveless shirt had appeared.

It was Coleman Boyd, an "anti," which is short for anti-abortion protester. Hancock knows him well from his almost daily protests outside the Jackson abortion clinic where she volunteers, helping patients avoid run-ins with antis like himself at the state's only remaining facility.

"Have mercy on the babies," Boyd shouted over and over again.

Gibson moved quickly toward him, but not fast enough to outpace a stampede of raging pro-abortion-rights men, all shouting as they advanced in Boyd's direction. One with a long white beard and matching ponytail reached Boyd first, and violently pushed him backward; another with scraggly brown hair, wearing an oversized tie-dye Bernie Sanders 2020 shirt, scowled just steps behind, next to a man with a white goatee and a black cowboy with a black t-shirt to match.

Hancock, thin and agile, swerved through the fracas and leapt between the men, as shouts of "We are shedding innocent blood!" and "Jackass!" sailed back and forth over her head. Men wearing similar "Pink House Defender" vests then appeared on either side of Hancock, locking arms with her to keep the untamed testosterone of their allies apart from the frantic street preacher.

In some ways, this was just another day in the life of Derenda Hancock, who has been helping women avoid men like Boyd while checking the passion of less-tempered abortion-rights activists ever since she began volunteering in 2013 as the Mississippi Legislature endeavored to get the clinic shut down.

Testing the Limits of Roe

In many ways, 2019 is a world apart from 2013. Mississippi legislators' efforts to use a convoluted admitting-privileges law to shut the clinic down faced near-certain defeat in the federal courts, which then brimmed with justices President Barack Obama had recently appointed.

Thanks to Trump's election, Anthony Kennedy, the former swing justice on the U.S. Supreme Court who stopped the overturn of Roe v. Wade in 1992, is gone. After he stepped down, Trump replaced him with the more conservative Brett Kavanaugh, whom many anti-abortion activists are hoping will tip the scales toward an evisceration of the court's landmark 1973 decision that declared abortion a constitutionally protected right.

The May 21 protest outside the Mississippi Capitol, which organizers intentionally staged a distance from the steps of the building to avoid proximity to a statue dedicated to the women of the Confederacy, was among a series of hundreds of nationwide #StopTheBans demonstrations in opposition to a cascade of newly enacted, severe abortion restrictions in state legislatures across the country.

Earlier this month, Sen. Joey Fillingane, R-Sumrall, who sponsored one such bill in Mississippi this year, told the Jackson Free Press that those laws are indeed intended to trigger a Roe "test case" before the Supreme Court.

"With a fifth conservative taking the seat of Justice Kennedy, who was considered a moderate on the court, I think a lot of people thought, finally, we have five conservative justices and so now would be a good time to start testing the limits of Roe," Fillingane said.

'It Sure Smacks of Defiance'

Outside the court, JWHO Director Shannon Brewer told members of the press that the number of women who have abortions at six weeks or earlier is "so small" she could not even estimate the number. Most women do not even know they are pregnant at that time, she pointed out. The lawmakers who passed the bill, and Gov. Phil Bryant, who signed it into law in March, know that, she said.

"They know that by the time a woman realizes she is pregnant, it's too late for her to have that choice," Brewer said.

Last year, Judge Reeves struck down another abortion law in the state, which banned the procedure after 15 weeks. He found it unconstitutional, but the State appealed his ruling to the 5th U.S. Circuit Court of Appeals in New Orleans, where a hearing pends. Why, Reeves asked State attorneys, would lawmakers and state leaders expect a different fate for an even more severe law?

"It sure smacks of defiance of this court," Reeves said.

At another point, Reeves posed a hypothetical to the State's attorneys: Would a 10-year-old girl who became pregnant through rape be forced to carry a child to term if she did not seek an abortion before six weeks?

Mississippi Special Assistant Attorney General Paul Barnes said he was not sure, but suggested she likely would have to continue the pregnancy if a heartbeat could be detected. The man who impregnated her, though, could be charged with rape, Barnes noted.

Attorneys from the Center for Reproductive Rights asked Reeves to block the six-week ban, which was set to go into effect on July 1, and also to join that case with the 15-week ban case that now sits before the 5th Circuit.

The judge declined to issue a ruling from the bench on May 21, but days later, on May 24, he issued an order to temporarily block the law from going into effect.

After the hearing on May 21, the Jackson Free Press asked Hillary Schneller, one of the center's attorneys, if she feared one of these cases could become the sort of "test case" Fillingane described—a possible death knell for Roe.

"I think the court has stood fast by the right to an abortion for nearly 50 years," Schneller said. "Over that time, the court has been of different compositions, and while state politicians may be hoping for a different result here, these bans have never stood a chance in court. There are many ways the court could undercut the right to abortion, which I think we're being distracted from focusing on by the fact that states are passing these bans now."

Schneller cited restrictions, like the 2012 admitting privileges law the Legislature passed the same year Derenda Hancock's volunteer efforts began at JWHO. After the courts struck that law down in Mississippi, a similar one in Texas met the same fate. The Center is now fighting a replica law in Louisiana, albeit with a less-friendly Supreme Court than during past battles.

"These are ways that the states are, in a more stealth strategy, undermining abortion without specifically challenging the core holding of Roe," Schneller said.

Outside the courtroom, a member of the press asked Brewer, JWHO's director, if she still has confidence in Roe. Brewer briefly paused.

In 2011, Mississippi voters decisively defeated the Personhood initiative, which would have banned abortion, in-vitro fertilization and several forms of birth control in the state.