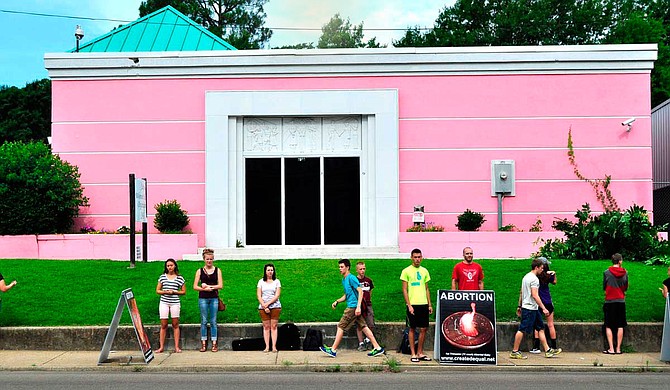 A Louisiana abortion law would turn the Bayou State into "an abortion desert" and would have strong ripple effects for women in Mississippi and other states across the country, opponents say. The U.S. Supreme Court is hearing arguments in the case Wednesday.

In June Medical Services, LLC v. Russo, attorneys with the Center for Reproductive Rights are asking the court to strike down a Louisiana "admitting privileges" law that conservative state legislators designed to force the closure of the state's three remaining clinics. It would require physicians who provide abortions to get notoriously difficult-to-obtain admitting privileges at a hospital within 30 miles of any clinic where they perform abortions.

In 2017, a federal court struck down a similar law in Mississippi that would have forced the state's only abortion clinic to shutter; only one doctor performs abortions in the Magnolia State, and he does not have admitting privileges.

T.J. Tu, the center's senior counsel for litigation, told the Jackson Free Press Monday that a ruling in favor of the Louisiana law could open the door for lawmakers in Mississippi to renew their push for an admitting-privileges law here.

"In Mississippi, they already tried, and that law was struck down. But if the Supreme Court says that a state like Louisiana can use medically unnecessary requirements to effectively ban abortion, then many other states may try the same thing," Tu said. "Even if it's not admitting privileges, we have seen, in state after state, anti-abortion legislators use medically unnecessary requirements to force competent doctors out of the practice of medicine, and it's possible that Mississippi would try the same thing, even though their attempt to use admitting privileges has already failed."

Physicians obtain admitting privileges so they can admit patients to local hospitals if complications arise during a procedure. Hospitals often reject abortion doctors' admitting-privilege applications, though, in part because most abortions are low-risk procedures, and complications are rare. When two physicians who provided abortions at Mississippi's clinic applied for admitting privileges after the State passed its version of the regulation in 2012, all seven local hospitals rejected them.

A federal judge struck down Mississippi's prior admitting-privileges law after the U.S. Supreme Court found that an identical law in Texas was unconstitutional in its 2016 Whole Woman's Health v. Hellerstedt ruling. Tu pointed to that ruling to explain why he is "confident and hopeful" that the high court will strike Louisiana's law down.

Since 2016, though, President Donald Trump has appointed two justices to the court—including Brett Kavanaugh, who replaced Justice Anthony Kennedy—who served as the deciding vote in favor of abortion rights in several key cases since the 1990s. In a Kentucky case last year, Kavanaugh joined his conservative jurists, allowing an pre-abortion ultrasound requirement law to take effect. Federal courts had previously struck down similar laws.

Tu told the Jackson Free Press that he believes the court's interest in maintaining its own integrity will compel it not to reverse its own ruling from just four years ago.

"The membership of the Supreme Court has changed, but the court has an overriding interest in making sure the public understands that a change in the makeup of the court does not effect a fundamental change in constitutional rights when none of the underlying facts have changed," Tu said this morning.

'Effort to Render the Entire South an Abortion Desert'

Even so, Tu stressed that a ruling in favor of the State of Louisiana would likely force two of the state's three remaining clinics to close. Five physicians currently perform abortions in Louisiana, but the admitting-privileges law would only leave one of them able to perform the procedure.

"The District Court in our case found that if the law went into effect, the state would be down to one doctor at one clinic. But what is important for people to understand is that gives some false sense of hope for most women in Louisiana when really none exists," Tu said.

"There are over a million women of reproductive age in Louisiana, and the reality is that one doctor cannot competently care for all those patients. So what the court found was that effectively between 5,000 and 7,000 women per year would have no access to abortion whatsoever in the state. So for those women it would effectively mean that Louisiana is an abortion desert."

Such a ruling would also affect Mississippi women who rely on Louisiana abortion clinics for care. In arguments Wednesday, the Center for Reproductive Rights is representing Hope Medical Group in Shreveport in northwest Louisiana. Only between 60% and 70% of the clinic's patients come from Louisiana, Tu told the Jackson Free Press.

"The rest are coming from neighboring states, including Mississippi, because the effort to render the entire South an abortion desert has been very effective in the surrounding states. So we saw an admitting-privileges law in Texas effectively close half the clinics in that state, and a lot of Texas patients started coming to Louisiana," he said.

"Same, too, as abortion access has dwindled in Mississippi, pressure has mounted on clinics in neighboring states, including Louisiana. So if abortion access in Louisiana is depleted based on this admitting-privileges law, there will be consequences for Mississippi women as well, because they're already having to turn to other states to access the health care they need, and those options will be fewer and far between."

Two abortion-providing physicians in Louisiana have admitting privileges at a local hospital, but one of those, who works at the Shreveport clinic on a part-time basis only, testified in federal court last year that he would quit providing abortions if the admitting-privileges law took effect for two reasons. First, the clinic would likely have to shut down, because the primary abortion provider does not have admitting privileges.

"And the other thing he testified is that because he would be the only physician left in the northern portion of the state. Because opposition to abortion is so vehement in the part of the state, he feared for the safety of himself and his family if he is rendered the lone provider up there," Tu said.

Employees and activists at Mississippi's only abortion clinic, the Jackson Women's Health Organization, have similarly expressed concerns about a growing sense of danger. The Jackson City Council passed a city ordinance late last year designed to create a "buffer zone" between protesters and the clinic. Clinic employees, Fondren residents and local business owners expressed concerns about a "dangerous" atmosphere.

Shannon Brewer, the director of the clinic, told the council at the time that the dozens of protesters who congregate around the clinic daily had created a "chaotic" and "dangerous situation" with "regular potential for violence." Law enforcement has paid hundreds of visits to respond to incidents at the clinic in the past decade.

Anti-abortion activists, though, are trying to undo that law on two fronts, arguing in court that it violates free-speech rights, while also backing a Republican bill in the Mississippi Legislature that would bar cities from regulating speech outside of medical facilities.

'Abortion Access is Already Holding on by a Thread'

Mississippi is presently fighting to defend two of its own current abortion laws in federal court after abortion-rights supporters sued to block the State's 15-week ban and a subsequent "heartbeat law" that bans abortions once a heartbeat becomes detectable, or around six weeks. After the 5th U.S. Circuit Court of Appeals blocked the 15-week ban earlier this year, Mississippi Attorney General Lynn Fitch vowed to continue defending it.

"I am disappointed with the 5th Circuit's order on our 15-week abortion regulation. I am committed to defending this law and will appeal the decision to the United States Supreme Court," Fitch said in a statement on Jan. 17.

The same appeals court also blocked the SIX-week ban on Feb. 20. Mississippi officials have not announced plans to move forward with an appeal of that law.

The Mississippi laws are just a few of the more than 400 anti-abortion laws that conservative state legislatures have passed since 2010, when a Tea Party-led backlash against the Obama presidency saw the rise of more right-wing legislatures nationwide. Louisiana also passed a 15-week abortion ban and a six-week ban, but those laws include a trigger clause; they will only take effect if the Mississippi laws first survive court challenges.

"We are litigating over two dozen cases right now challenging various restrictions on abortion. One of those is a law in Louisiana requiring physicians to have admitting privileges, which is the same law the court struck down just three years ago in Texas," Schneller told the Jackson Free Press in May 2019. "We've asked the Supreme Court to review that decision from Louisiana again. So these are ways that the states are in a more stealth strategy undermining the right to abortion without challenging the core holding of Roe."

With the Supreme Court's review of the Louisiana law now imminent, Tu said it is important for the public to understand that "the consequences of laws like the one in our case are no different than all out bans" on abortion.

"Many people take comfort in the fact that courts have blocked all of these gestational bans, 6-week bans, 15-week bans, because they're directly in conflict with Roe v. Wade. But Louisiana's law shows that you don't have to ban abortion outright to remove the constitutional right to abortion access for most women, if not all women, in a state," Tu said. "So it's critically important that people understand the stakes in a case like ours is just as high, because the reality on the ground is that abortion access is already holding on by a thread in states like Louisiana.

"And if laws like this go into effect, then whether a state bans abortion outright or whether Roe v. Wade gets overturned is irrelevant, because for most women, there is no abortion access regardless."