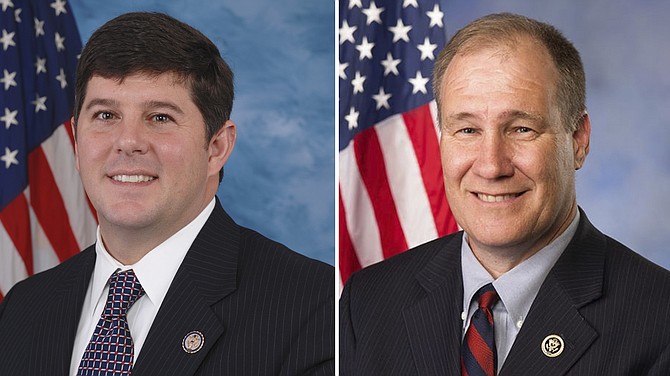 U.S. House Reps. Steven Palazzo and Trent Kelly, who are both Republicans from Mississippi, did not cast a vote on the Families First Coronavirus Response Act.

Two Mississippi members of the U.S. House did not show up for a vote on an emergency bill to provide funding for combating the spread of the novel coronavirus, COVID-19. Republican U.S. House Reps. Steven Palazzo and Trent Kelly were among 26 members of Congress who did not vote.

“It was really important to have a bill right now because of the challenges there,” U.S. House Speaker Nancy Pelosi said before members voted on the bill Friday. “It was important for us to say: no longer can we be in denial about the numbers and what is happening in our country, we have to get this testing bill passed. … And so that was absolutely urgent, and therefore, unfortunately, our Members are here till all hours each night anticipating what we may do.”

Palazzo, like Kelly, has not spoken publicly on his abstention, nor did he respond to a request for comment on Saturday. On March 11, though, Palazzo tweeted that he was “prepared to support necessary efforts to curb the spread of the Coronavirus.”

On March 12, after Pelosi announced the bill, he tweeted an implied criticism at her. “Now she cares about American families?” Palazzo wrote.

Then, on March 13, Palazzo did not show up to vote on the bill. At least three of the currently confirmed COVID-19 cases are in Forrest County, which is part of Palazzo’s congressional district. By Friday, the Mississippi State Department of Health had confirmed six cases in the state.

Either Palazzo or Kelly could have voted “present” if they did not feel comfortable with voting directly for or against the bill. Only one member of Congress did so: Rep. Justin Amash, an independent from Michigan.

Amash explained his "present" vote on Twitter, pointing to errors and "holes" in the bill, including the fact that the bill's sick-leave provision does not currently cover large businesses with more than 500 employees. The bill also exempts businesses that employ 50 or fewer people.

Rep. Guest: Mississippi and Washington ‘Working in a United Front’

After President Donald Trump tweeted that it was “nice to see” Republicans and Democrats working together to pass a coronavirus relief bill, U.S. House Rep. Chip Roy, a Texas Republican, similarly explained his “no” vote on social media.

After Trump declared a state of emergency on Friday, Guest vowed to work to help protect Mississippians.

"This move by our president will free up additional federal funding and will allow FEMA to work with our state and local agencies in a national response. … We are working in a united front, Mississippi and Washington, to see that the corona outbreak is met with a swift and appropriate response. Now is not the time to panic, but it is the time to take precautions,” Guest said in a video message to constituents.

Guest said he had invited Dr. Thomas Dobbs, the Mississippi state health officer, to testify before Congress about the State’s preparations for the virus.

Guest serves Mississippi’s Third Congressional District, which runs from Natchez in the southwestern part of the state and includes Meridian and Starkville in the east-central part of Mississippi.

Thompson, the second-district congressman who represents constituents in the Delta and part of the capital city, Jackson, urged U.S. Senate Majority Leader Mitch McConnell to reconvene the Senate immediately and pass the bill so Trump can sign it. McConnell, a Republican, called for a three-day recess for the upper-chamber and left Washington, D.C., on Thursday night.

“McConnell must immediately call the Senate back in session to vote on the House-passed coronavirus relief package,” Thompson tweeted Friday.

The U.S. Senate is not set to reconvene until Monday.

Thompson has taken a harsh tone toward Trump, though, writing on Friday that the president’s response has been “pathetic” and “inept.”

“He is in no way prepared to handle the pandemic,” Thompson wrote.

Throughout February, Trump downplayed the threat of the coronavirus.

“It’s going to disappear. One day, it’s like a miracle, it will disappear,” he said at a rally two days later, also bizarrely calling the coronavirus outbreak a political “hoax” that Democrats were trying to use to hurt his re-election chances.

By March 13, more than 2,000 Americans had already tested positive for the coronavirus, despite a shortage of tests. Trump has drawn bipartisan criticism for the delay in testing equipment, which House leaders hope the current bill will remedy.

When a reporter asked Trump if he takes any responsibility for the lack of testing at a press conference on Friday, the president said he did not.

“No, I don’t take any responsibility at all,” Trump said.

U.S. Sen. Roger Wicker, a Republican, praised Trump’s national emergency declaration on Friday, which will provide up to $50 billion in resources to respond to the outbreak.

“Today the President delivered the message Americans needed to hear. Greater federal resources will give health-care workers more tools to fight the virus,” Wicker said in a press statement. “By bringing together our country’s biggest tech, retail, and health-care companies, more Americans will be able to get tested sooner. Stopping the spread of the coronavirus is a serious effort, and these steps will help turn the tide.”

Gov. Reeves: ‘We Are Not Taking Any Chances’

On Saturday, Mississippi Gov. Tate Reeves declared a state of emergency that will allow the state to receive federal funds and equipment to fight the virus. Reeves asked the Mississippi State Department of Education to extend spring break by at least one week. MSDE can waive the requirement that schools operate for 180 days if necessary.

“Taking proactive measures to limit community spread, I have declared a state of emergency to deploy the necessary resources to protect public health and take care of all Mississippians. We are not taking any chances,” Reeves said in a press statement on Saturday. “This is our latest step to respond to COVID-19, and it will not be our last. We will continue coordinating our response efforts and prioritizing the health and well-being for all who call Mississippi home.”

On Friday evening, Hattiesburg Mayor Toby Barker and Forrest County Board of Supervisors President David Hogan also signed state of emergency declarations to procure federal aid for local use after the Mississippi State Department of Health confirmed a third case in the area.

“Declaring COVID-19 as a local emergency is a precaution. It cuts out the red tape that is often associated with procuring resources, allowing us to serve the residents of Forrest County quickly,” Hogan said in a press statement.

Barker said the local declaration will help make sure medical facilities, first responders and healthcare workers have the resources they need, like personal protective equipment and funding for overtime pay.

Health experts at Forrest General Hospital offered advice for protecting against the virus during a press conference on Thursday. The hospital is monitoring a local 49-year-old man who became Mississippi’s first confirmed coronavirus patient last week. He is self-quarantining at home.

On Thursday, Jackson Mayor Chokwe A. Lumumba announced the launch of a COVID-19 task force composed of city officials, public-health experts, and other partners in the capital city's health-care system.

The MSDH website, healthyms.com, provides additional information on the virus in Mississippi and effective preventative measures for all residents.

The spread of the coronavirus in Mississippi is a rapidly changing story. Read the JFP's coverage of COVID-19 at jacksonfreepress.com/coronavirus for updates. Get more details on preventive measures here. And read about announced closings and delays in Mississippi here.

Email state reporter Nick Judin, who is covering COVID-19 in Mississippi, at [email protected] and follow him on Twitter at @nickjudin. Nick Judin contributed to this report.