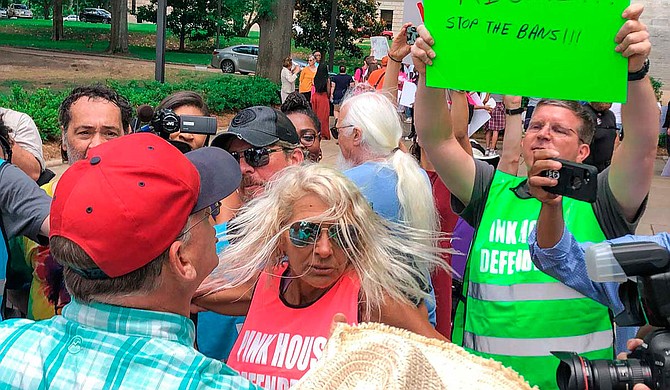 An abortion-rights rally outside the Mississippi Capitol building last year drew a moment of chaos when an anti-abortion activist with a bullhorn interrupted a speech. Photo by Ashton Pittman

Jackson's medical facility "buffer zone" law, which minimizes protest activities in the immediate vicinity of the state's only abortion clinic, may be short-lived if a Republicans bill in the Mississippi Legislature becomes law.

Republican-sponsored House Bill 628 would amend State law to prohibit cities from regulating "directly or indirectly, any medical facility, hospital, clinic, or other health care facility in a manner that restricts free speech or other fundamental rights in the immediate vicinity of the facility" without "prior legislative approval."

Mississippi House Rep. Randy P. Boyd, R-Mantachie, admitted to the Jackson Free Press on Thursday that the bill is a direct response to Jackson's ordinance.

"That's what brought it about. I won't beat around the bush," Boyd said. "The reason for the bill is I don't think any part of the government should limit the free speech of individuals on public grounds."

Nine Republican House members joined Boyd to sponsor his bill, including Reps. Wallace Price, Fred Shanks, Donnie Scoggin, Timmy Ladner, Steve Hopkins, Jeff Hale, Kevin Ford, Dana Criswell and Nick Bain. The bill sits in the House Judiciary A Committee, which will decide whether or not it advances for a vote on the full House floor.

The Jackson City Council passed the ordinance in October, requiring protesters to demonstrate at least 15 feet away from the Jackson Women's Health Organization in Fondren. The ordinance also banned shouting and the use of loud-speaker systems to get their message out. Under the law, protesters cannot come within 8 feet of a patient to talk or share leaflets without consent if that patient is within a 100-foot radius of the clinic. The ordinance proscribes up to 90 days in jail or a $1,000 fine for violators.

When the Jackson City Council considered the ordinance last year, supporters of the law, including business leaders and Fondren residents, described an atmosphere in which children nap on sidewalks outside the abortion clinic, while their anti-abortion activist parents march up and down the streets for hours, using bullhorns to plead with or denounce as "jezebels" women who are trying to make their way to the facility's doors.

Protesters shouting epithets like "Murderer!" awaken medical workers in nearby apartments who are trying to sleep after working the night shift at a local hospital, one resident said.

Shannon Brewer, the director of the clinic, told the council at the time that the protests had created a "chaotic" and "dangerous situation" with "regular potential for violence." Law enforcement has paid hundreds of visits to respond to incidents at the clinic in the past 10 years.

On Thursday, Boyd dismissed those concerns as secondary. "I think free speech overrides that, but I think these things have been going on for years, and no one has been hurt down there," he told the Jackson Free Press.

At the meeting in October, Jackson City Attorney Tim Howard said the ordinance follows U.S. Supreme Court precedent on reasonable limits that lawmakers can impose on speech outside a health-care facility; he cited a similar Colorado law that withstood a challenge at the nation's highest court.

Anti-abortion protests sued over Colorado's buffer zone that limited protest, education and distribution of literature or counseling within 8 feet of a person entering a health-care facility. But the law's detractors ultimately lost the court battle, with the U.S. Supreme Court ruling 6-3 in 2000 that the law was constitutional.

In 2014, however, the U.S. Supreme Court found that a Massachusetts law establishing a 35-foot buffer zone around abortion clinics, enacted after two women were murdered and five injured at abortion clinics, went too far constitutionally. The full court agreed, but without striking down such laws altogether. The 35-foot zone was too restrictive, and the State did not try less intrusive options first, the Court found in McCullen v. Coakley.

"The buffer zones burden substantially more speech than necessary to achieve Massachusetts' asserted interests," Chief Justice John Roberts wrote for the Court. ... "In short, the Commonwealth has not shown that it seriously undertook to address the problem with less intrusive tools readily available to it. Nor has it shown that it considered different methods that other jurisdictions have found effective."

Barbara Beavers, an anti-abortion activist who said she has been "on the sidewalk" for 40 years, told the Council in October that it would make it more difficult for her and others to identify which women were coming in for abortions.

"The problem with the buffer zone and all that is how will we know who is going in there if we have to be so far away? How are we going to determine who are the women going into the abortion facility? So we need close proximity, we need closer than 15 feet. And if we're not there, we can't just pull them and dissuade them," she said.

While the the City passed the ordinance in response to particular concerns about the abortion clinic, it applies to all medical facilities in the City.

In mid-October, The Mississippi Justice Institute, a conservative legal organization, and local anti-abortion activists filed a lawsuit in the Hinds County Circuit Court challenging the ordinance. The case is still pending after a motion by the City to have the case moved to a federal court failed.