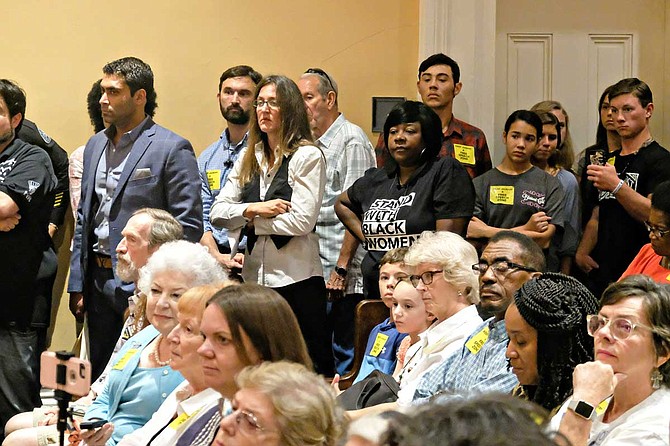 JACKSON—Children nap on sidewalks outside the abortion clinic while their anti-abortion activist parents march up and down the streets for hours, using bullhorns to plead with or denounce as "jezebels" women who are trying to make their way to the facility's doors. Rage-filled cries of "Murderer!" awaken nearby medical workers in their apartments who are trying to sleep after working the night shift at a local hospital. Across the street from the Jackson Women's Health Organization in Fondren, outdoor diners at a local restaurant try to enjoy their food, only to glance in the direction of the clinic and see grotesque, bloody images meant to depict aborted fetuses.

Clinic workers, as well as Fondren residents and business owners, painted that picture on Thursday as they urged the Jackson City Council to pass an ordinance that would limit some of the protesters' activities outside Mississippi's only abortion clinic. On any given day, dozens, and sometimes more than 100, activists show up to protest.

The proposed ordinance would seek to ameliorate the problems around the clinic by creating a 15-foot buffer zone around all health-care facilities in the City that protesters could not breach, and also bar them from coming within 8 feet of a patient within a 100-foot radius of the clinic to talk or share leaflets without consent. Protesters also could not use any speakers or audio amplifiers within 100 feet of any health-care facility. Violators would face up to 90 days in jail or a $1,000 fine.

"It is chaotic, it is a dangerous situation, and there is a regular potential for violence," JWHO Director Shannon Brewer told the council at a special meeting Thursday. "It is not sustainable."

Parents and adults sometimes block the entrance to the clinic parking lot, Brewer said, adding that she almost hit an unattended child with her car once while the parent walked up and down the pavement.

In any other situation, she said, Child Protective Services would get involved.

'This is About Safety'

A patient could break the buffer zone to speak with protesters if they chose, though, City Attorney Tim Howard told the council Thursday. While anti-abortion activists said they fear the ordinances will violate their First Amendment rights, Howard said it follows U.S. Supreme Court precedent on reasonable limits that lawmakers can impose on speech outside a health care facility; he cited a similar Colorado law that withstood a challenge at the nation's highest court.

In her remarks, Brewer said that while JWHO supports free speech even for those who disagree with them, the ordinance is about protecting the community.

Jackson Police Department Precinct Four Commander Keith Freeman also voiced his support for the ordinance, saying it would help his officers who often find themselves dealing with incidents outside the clinic. He said he reviewed 10 years of police records and found nearly 400 calls for JPD to come to JWHO—not including calls and texts to his personal phone.

"I have to go up there or a supervisor to try to keep the peace. ... It takes officers' time away from doing our daily duties so it's very time-consuming, and I hope this ordinance will solve that," Freeman said.

'Accused of Cooking Babies in the Kitchen'

Mike Peters of Peters Real Estate in Fondren, who redeveloped the Fondren Corner building immediately across from the clinic, told the Council that things had changed a lot in recent years.

"Ten years ago it was not what it is today. The rhetoric, the aggressiveness has escalated significantly in the last 12 to 18 (or) 24 months. We had workable situations 10 years ago with some of the protesters," Peters said.

Nathan Glenn, who owns restaurants Roosters and Basil's Fondren, said that protesters with microphones sometimes shout accusations at him while customers try to eat on his open patio.

"I have been accused of cooking babies in the kitchen, of frying little kids. As customers are sitting on my open patio, they'll say, 'How can you be over there eating cheeseburgers when they're killing babies over (at the clinic)?" Glenn said. "It's almost social terrorism. These are aggressive people."

Mike Patel said his business, Heritage Hospitality Group, is currently building Homewood Suites by the clinic in Fondren. When the hotel opens, he fears, guests will not have a pleasant experience unless something changes.

"You have guys out there with bullhorns, P.A. speakers, and during the construction phase you can barely hear what's going on inside," Patel told the council. "When we have close to 150 to 175 guests staying at the hotel at any given time, what says these guys aren't going to have a P.A. speaker or bullhorn (while guests) are trying to sleep in? A lot of these people are going to be medical workers."

Fondren, one of Jackson’s fastest-growing neighborhoods, is experiencing a boom in hotels and other development. Some of those plans, however, are causing controversy and businesses to relocate. Here are related stories.

Patel said construction has been held up at times because workers operating forklifts have had to stop for the safety of protesters in the area.

Scotta Brady told the Council she is a homeowner in Fondren who has gone to JWHO for an IUD, only to be met with angry shouts and "fetal pornographic signs." She previously owned a Fondren business, Butterfly Yoga, near JWHO.

But Kayland McCarley, who is an office manager at the Cline Pregnancy Center who works with the "sidewalk counselors" to bring women to their doors, told the Council they help dissuade women from having abortions.

The Cline Pregnancy Center is a nonprofit organization in Fondren. It's one of what anti-abortion activists call "crisis pregnancy centers." The backers of groups like the Cline Center, which has registered nurses on staff, often plant them near abortion clinics and attempt to convince women to consider other options instead of abortion.

McCarley said the organization refers women to Jackson groups like the faith-based Voice of Calvary Ministries organization, which uses charity to tackle poverty-related issues with resources like food pantries; The Tower, a nonprofit that helps rehabiliate women who have been rescued from sex-trafficking situations; and Families First for Mississippi, which offers parenting classes, education assistance, help with literacy and assistance for people looking for jobs.

"I've heard things like, 'I do not want to have an abortion, I was just overwhelmed, and I thank God for those people on the sidewalk,'" McCarley said.

Jackson resident Barbara Beavers, who said she has been working as a "sidewalk counselor" for 40 years, told the council that the buffer zone would prevent her from reaching women.

"So many come to this medical facility undecided about their decision, and we can verify that by the number of women who come back to us and say thank you for being there as a witness to say, 'There is hope. There is help.' ... We need access to the women," Beavers said.

She said the buffer zone would force sidewalk counselors to have to shout more loudly in order for women to hear them.

"The problem with the buffer zone and all that is how will we know who is going in there if we have to be so far away? How are we going to determine who are the women going into the abortion facility?" she said. "So we need close proximity, we need closer than 15 feet. And if we're not there, we can't pull them or dissuade them. We're just there to let them know we care, that the church is with us, that the church is behind us, that there are options."

Ronnie Crudup Sr., the senior pastor of New Horizon Church International in south Jackson, told the council that the policy would "curtail the right to be heard."

"I've got adults that are over 20 years old, I've got teenagers in our congregation who are walking around today because somebody cared enough to speak to those women who are part of our congregation in their midst of their distress to give them that option," he said. "So I've got people today who are alive because of this."

The proposed ordinance does that, he said.

"You have a significant governmental interest in ensuring that there is unimpeded health-care access to health-care facilities and the avoidance of additional trauma to patients associated with up-close confrontational protest," Howard said.

Howard also cited an interest in "supporting an individual's right to be left alone and to privacy and tranquility"; "an individual's interest in avoiding unwanted communication they are powerless to avoid"; "protecting those who wish to enter a health-care facility many of whom are already under physical and emotional distress"; and providing "more of a bright line type of guidance to law enforcement so that the ordinance can be enforced and enforced evenhandedly."

He said the proposed ordinance is narrowly tailored because protest signs are still readable at 15 feet away, it does not ban any messages or viewpoints, and counselors can still speak to and share their message with patients who consent.

"It does not ban speech. It does not make it a little more difficult to give unwanted advice to persons who are entering medical facilities who are oftentimes under physical and emotional stress," Howard said.

The council did not vote on the ordinance in Thursday's special session, nor indicate when it would make a final decision.