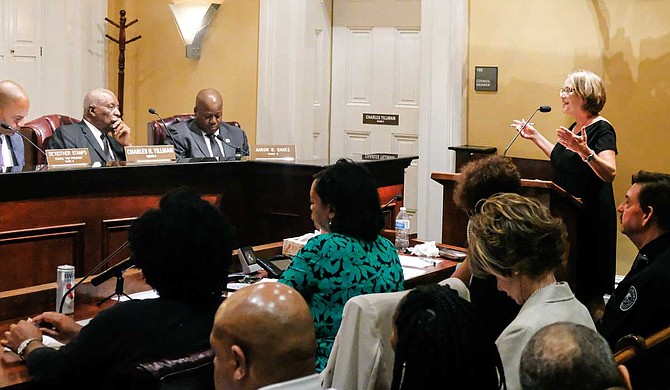 Anti-abortion activist Barbara Beavers is a plaintiff in a lawsuit against the City of Jackson to stop a new buffer-zone law limiting how close "sidewalk counselors" can get to health-care facilities. She implored Jackson City Council members to vote against it on Sept. 27.Photo by Ashton Pittman

Anti-abortion activists in Jackson claim in a new lawsuit that they have a "right" to "congregate," "shout" and approach patients outside the abortion clinic in Fondren "without first obtaining their consent."

The Mississippi Justice Institute, a conservative legal organization, and members of the local Sidewalk Advocates for Life organization announced the lawsuit on Monday after filing it in Hinds County Circuit Court on Oct. 11.

The Jackson City Council passed an ordinance on Oct. 1 that creates a buffer zone around health-care facilities in the city, effective at the end of this month. It requires demonstrators to stand at least 15 feet away from clinic properties like the Jackson Women's Health Organization—the last abortion clinic in the state, which draws dozens and sometimes hundreds of anti-abortion activists daily.

"Our clients are engaging in quintessential free speech, and they are doing so peacefully and respectfully," MJI Director Aaron Rice said in a press statement. "They care deeply for the unborn and feel morally led to offer life-affirming alternatives to people entering an abortion facility. Jackson's new ordinance is an attempt to silence our clients' speech, and we are proud to stand with them and defend their rights."

'There is Regular Potential for Violence'

In addition to the 15-foot buffer zone, protesters must not come within 8 feet of a patient who is within a 100-foot radius of the clinic without their permission. Under the ordinance, protesters also cannot use speakers or audio amplifiers within 100 feet of any health-care facility. Violators could face misdemeanor charges, including up to 90 days in jail or $1,000 in fines.

When the council was debating the ordinance late last month, the clinic's director, Shannon Brewer, described an atmosphere of chaos, danger and violence, with children sleeping on sidewalks while their parents march up and down the street, sometimes using bullhorns to shout things like "Murderer!" at women as they enter JWHO.

"It is chaotic, it is a dangerous situation, and there is a regular potential for violence," JWHO Director Shannon Brewer told the council at a special meeting. "It is not sustainable."

Brewer said that, while JWHO supports free speech even for those who disagree with them, the ordinance is about protecting the community.

The plaintiffs, though, claim the ordinance will make it difficult for them to continue offering their "counseling services" to abortion-clinic patients.

During public comment at the Sept. 26 council meeting, Jackson resident Barbara Beavers, who is now one of the plaintiffs in the lawsuit, said she has been working as a "sidewalk counselor" for 40 years, simply telling women "there is hope" and that they have other options.

"We need access to the women. ... The problem with the buffer zone and all that is, how will we know who is going in there if we have to be so far away? How are we going to determine who are the women going into the abortion clinic?" she said. "So we need close proximity, we need closer than 15 feet. And if we're not there, we can't pull them or dissuade them. We're just there to let them know we care, that the church is with us, that the church is behind us, that there are options."

In its Oct. 14 press release announcing the lawsuit, MJI contends that they have "trained thousands of volunteers to go to abortion facilities" in the past five years, dissuading "nearly 7,000 women" from having abortions nationwide.

"Women regularly accept our offer to help in the midst of an unexpected pregnancy," Pam Miller, the co-leader of Sidewalk Advocates for Life - Mississippi, said in the MJI press release. "In fact, in partnership with other peaceful community members, more women than ever—at least this year alone—have opted to take advantage of the free, alternative resources the Jackson community provides."

During the Sept. 27 public comments, several business owners who operate near the clinic in Fondren said the activities are disruptive to their clientele.

Nathan Glenn, who owns restaurants Roosters and Basil's Fondren across from the linic, said that protesters with microphones sometimes shout accusations at him while customers try to eat on his open patio.

"I have been accused of cooking babies in the kitchen, of frying little kids. As customers are sitting on my open patio, they'll say, 'How can you be over there eating cheeseburgers when they're killing babies over (at the clinic)?" Glenn said. "It's almost social terrorism. These are aggressive people."

At that meeting, City Attorney Tim Howard said that, in order to survive a constitutional challenge, the law would need to pass a legal litmus test by advancing a "significant government interest" and being "narrowly tailored to achieve the city's significant governmental interest."

"You have a significant governmental interest in ensuring that there is unimpeded health-care access to health-care facilities and the avoidance of additional trauma to patients associated with up-close confrontational protest," Howard said.

Howard also cited an interest in "supporting an individual's right to be left alone and to privacy and tranquility"; "an individual's interest in avoiding unwanted communication they are powerless to avoid"; "protecting those who wish to enter a health-care facility many of whom are already under physical and emotional distress"; and providing "more of a bright line type of guidance to law enforcement so that the ordinance can be enforced and enforced evenhandedly."

He said the proposed ordinance is narrowly tailored because protest signs are still readable at 15 feet away, it does not ban any messages or viewpoints, and counselors can still speak to and share their message with patients who consent.

"It does not ban speech. It does not make it a little more difficult to give unwanted advice to persons who are entering medical facilities who are oftentimes under physical and emotional stress," Howard said.

Howard said that the ordinance includes all health-care facilities to avoid claims of unequal treatment for just one facility in Fondren.

The appellants' lawsuit disputes all of that, though, claiming the ordinance's "treatment" is "unequal" because medical workers trying to help patients enter the clinic do not have to abide by the same rules and that the "interests being furthered by the unequal treatment of the Ordinance are not legitimate, substantial, or compelling."

The lawsuit claims the ordinance has a "chilling effect" on the anti-abortion demonstrators' speech.

At the Sept. 27 meeting, though, Howard pointed out that the ordinance is nearly identical to a Colorado law that has already passed constitutional muster.

That is a reference to Article 3, Section 13 of the Mississippi Constitution, which proscribes that "the freedom of speech and of the press shall be held sacred."

Anti-abortion protesters in Jackson will now have to voice their concerns standing at least 15 feet away from the Jackson Women's Health Organization in Fondren, and will no longer be able to engage in loud activities, such as shouting or using loud-speaker systems to get their message out. JWHO is the only remaining abortion clinic in Mississippi.

The Jackson City Council approved the "buffer zone" ordinance on Tuesday, after a heated meeting in which more than a dozen community members spoke out against or in favor of the ordinance. It creates a 15-foot buffer zone around all health-care facilities in the City that protesters cannot breach, and also bars them from coming within 8 feet of a patient within a 100-foot radius of the clinic to talk or share leaflets without consent.

Protesters cannot use speakers or audio amplifiers within 100 feet of any health-care facility. Violators would face up to 90 days in jail or a $1,000 fine.

The council passed the ordinance on Oct. 1 by a 3-1 vote, with only Ward 1 Councilman Ashby Foote voting against it. Council President Virgi Lindsay, the councilwoman who oversees Ward 7 where Fondren is, voted in favor of the ordinance, with Ward 2 Councilman Melvin Priester Jr. and Ward 5 Councilman Charles Tillman joining her.

Neither Ward 4 Councilman De'Keither Stamps, Ward 6 Councilman Aaron Banks nor Ward 3 Councilman Kenneth Stokes were present for the vote Tuesday. Stokes is on a leave of absence for medical reasons.