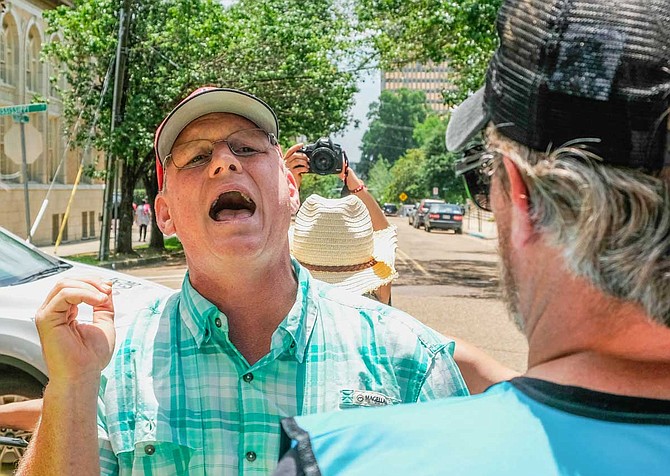 Anti-abortion activist Coleman Boyd, who often protests outside the Jackson Women's Health Organization with shouting and loud speakers, crashed an abortion-rights demonstration at the Mississippi State Capitol on May 21, 2019. Photo by Ashton Pittman

Anti-abortion protesters in Jackson will now have to voice their concerns standing at least 15 feet away from the Jackson Women's Health Organization in Fondren, and will no longer be able to engage in loud activities, such as shouting or using loud-speaker systems to get their message out. JWHO is the only remaining abortion clinic in Mississippi.

The Jackson City Council approved the "buffer zone" ordinance on Tuesday, after a heated meeting in which more than a dozen community members spoke out against or in favor of the ordinance. It creates a 15-foot buffer zone around all health-care facilities in the City that protesters cannot breach, and also bars them from coming within 8 feet of a patient within a 100-foot radius of the clinic to talk or share leaflets without consent.

Protesters cannot use speakers or audio amplifiers within 100 feet of any health-care facility. Violators would face up to 90 days in jail or a $1,000 fine.

"We applaud the Jackson City Council for approving a 15-foot buffer zone near the front entrance of health care facilities," Katherine Ragsdale, the interim president and CEO of the National Abortion Federation, said in a press statement Tuesday afternoon. "We are proud to call Jackson Women's Health (Organization) a NAF member and look forward to the positive impact this ordinance will have on their patients' experiences."

"Abortion providers are targeted every day for anti-abortion violence and disruption. This ordinance will help to reduce the harassment and obstruction patients experience when trying to obtain the health care they need," Ragsdale added. While anti-abortion activists said they fear the ordinances will violate their First Amendment rights, Jackson City Attorney Tim Howard said it follows U.S. Supreme Court precedent on reasonable limits that lawmakers can impose on speech outside a health care facility; he cited a similar Colorado law that withstood a challenge at the nation's highest court.

Last week, supporters of the ordinance, including business leaders and Fondren residents, described an atmosphere in which children nap on sidewalks outside the abortion clinic, while their anti-abortion activist parents march up and down the streets for hours, using bullhorns to plead with or denounce as "jezebels" women who are trying to make their way to the facility's doors. Protesters shouting epithets like "Murderer!" awaken medical workers in nearby apartments who are trying to sleep after working the night shift at a local hospital, one resident said.

Nathan Glenn, the owner of restaurants Roosters and Basil's right across from the clinic in Fondren, told the council last week that the current atmosphere is bad for business.

"When they have the microphones out, I have been accused of cooking babies in the kitchen, of frying little kids," Glenn said. "As customers are sitting on my open patio, they say, 'How can you be over there eating cheeseburgers when they're killing babies?' ... It's almost social terrorism. These are aggressive people."

Shannon Brewer, the director of the clinic, told the council last week that the protests, which draw dozens of anti-abortion activists every day, have created a "chaotic" and "dangerous situation" with "regular potential for violence."

"There are grown men out there chasing women with bullhorns and amplifiers, screaming at these women every day," she said.

But Elijah Friedeman, a local male pastor who opposes the new ordinance, said last week that it would have a "harmful effect on the civil rights of Jackson civilians." Barbara Beavers, an anti-abortion activist who said she has been "on the sidewalk" for 40 years, said it would make it more difficult for her and others to identify which women were coming in for abortions.

"The problem with the buffer zone and all that is how will we know who is going in there if we have to be so far away? How are we going to determine who are the women going into the abortion facility? So we need close proximity, we need closer than 15 feet. And if we're not there, we can't just pull them and dissuade them," she said.

This is a developing story. Check back for more updates.