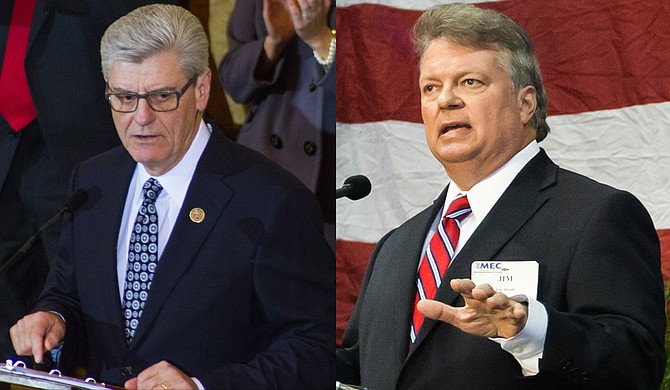 Though Mississippi Gov. Phil Bryant vowed to appeal a 15-week abortion ban to the U.S. Supreme Court, Attorney General Jim Hood instead asked for all 17 judges on the 5th U.S. Circuit Court of Appeals for a re-hearing of the case instead. Photo by Stephen Wilson. File photo.

Mississippi wants a redo after a federal appeals court struck down its 2018 law that bans women from having abortions after 15 weeks of pregnancy. Mississippi Attorney General Jim Hood filed a motion asking the 5th U.S. Circuit Court of Appeals in New Orleans to reconsider the law's constitutionality on Dec. 27.

On Dec. 20, a three-judge panel on the court ruled that the ban conflicts with the U.S. Supreme Court's prior rulings that upheld a woman's right to abortion. Mississippi's latest filing, though, argues that the panel's reasoning "conflicts" with prior decisions, and "involves issues of exceptional importance not only to the State of Mississippi, but ... Louisiana and Texas as well." The New Orleans-based appeals court hears federal cases originating in all three states.

The State of Mississippi is asking the court for an en banc hearing, meaning all 17 judges on the appeals court would hear the case instead of the standard three-judge panel. The overall court is significantly more conservative than the three-judge panel, especially since President Donald Trump appointed five of his own picks to the court. Democratic presidents appointed just eight of the court's current members.

A 'Mission to the United States Supreme Court'

After the three-judge panel ruled that the 15-week ban was unconstitutional on Dec. 20, Mississippi Gov. Phil Bryant vowed to appeal the decision to the U.S. Supreme Court, which could have set up for a hearing in Washington, D.C., as early as this spring if the high court had taken the case. If the 5th Circuit agrees to Hood's motion, though, that would push back the timeframe for a possible Supreme Court showdown.

"Mississippi will continue this mission to the United States Supreme Court," Bryant, a Republican, tweeted.

Conservative Louisiana legislators designed that law, which requires abortion providers to get difficult-to-obtain admitting privileges at a local hospital, with the goal of shutting down most if not all of that state's three remaining abortion clinics by making it practically impossible for them to continue to operate. The Mississippi Legislature passed a similar law in 2012 that federal courts struck down as unconstitutional.

A conservative-leaning three-judge panel at the 5th Circuit, though, upheld Louisiana's admitting privileges law; the U.S. Supreme Court is set to hear an appeal in that case early next year. Mississippi's Dec. 27 filing points to a portion of the ruling that applies the so-called "large-fraction test," referring to a hazy 1992 Supreme Court standard that says abortion laws place an unconstitutional "undue burden" on women if they prevent "a large fraction" of women from getting an abortion.

"Thirty percent does not approach 'practically all' women seeking abortions in Louisiana and cannot be deemed a large fraction," the 5th Circuit wrote in its ruling that upheld Louisiana's admitting privileges law last year.

The 15-week challenge does not meet that test, Mississippi's motion for a redo argues, because only a small number of women obtain abortions after 15 weeks. The Jackson Women's Health Organization, the sole abortion clinic in the State, only performs abortions up until 16 weeks, meaning the law affects a small number of its patients. Because of that, the 5th Circuit should have considered the "large fraction" test in its Dec. 20 ruling, Mississippi claims.

"Here, the 15-week law is a potential restriction for the approximately 90 women who historically obtain abortions from Plaintiffs during the fifteenth week of pregnancy," Hood's filing reads. "The group of women for whom the law would operate as a substantial obstacle would consist of the women actually unable to obtain an abortion from Plaintiffs before 15 weeks. There is no evidence in the record to indicate that any woman would be unable to do so."

'Not Constitutional Under Any Set of Circumstances'

In the ruling last year that triggered the current appeal, U.S. District Court Judge for the Southern District of Mississippi Carlton W. Reeves wrote that the "large fraction" test was irrelevant in this case.

The act is unconstitutional, Reeves ruled, because it bans abortions prior to viability--which the U.S. Supreme Court's 1973 Roe v. Wade ruling expressly forbids.

While Mississippi waits for a decision on a full court hearing, the 5th Circuit is set to hear the State's appeal on another anti-abortion law, the State's "heartbeat" law, which bans abortions after a fetal heartbeat becomes detectable--which typically happens around six weeks of pregnancy. The Legislature passed that law in March, and Reeves struck it down in May, triggering yet another appeal to the New Orleans court.

The 5th Circuit will hear arguments over the State's six-week ban on Feb. 6.

The fate of Louisiana's own recent abortion restrictions, including a 15-week ban and "heartbeat" law that Baton Rogue lawmakers copied from their counterparts in Jackson, hinges on how the courts decide the Mississippi cases. Louisiana legislators inserted a provision into those laws mandating that they will only take effect if federal courts uphold the Mississippi laws they're based on--sparing Louisiana from spending millions in litigation costs defending them.

"Mississippi taxpayers already are likely going to be saddled with a costly, and losing, court fight over its recently passed and flawed abortion restrictions," Mississippi House Rep. Jeramey Anderson, D-Moss Point, told the Jackson Free Press in May. "If Louisiana wants to fight the same fight, it should pay for it or send some of its taxpayers' money to Mississippi to help defray the cost of this losing cause."

In January, Republican Mississippi Treasurer Lynn Fitch will take over as attorney general, and will begin overseeing the defense of the 15-week ban and the heartbeat law.

During her campaign earlier this year, the anti-abortion Susan B. Anthony List endorsed her, saying Fitch is "committed to upholding Mississippi's pro-life laws and ensuring they are vigorously defended as attorney general." The group also praised her for playing "a key role in crafting the party's most pro-life platform ever" at the 2016 Republican National Convention.

Fitch helped craft the 2016 RNC platform that took extreme positions on abortion. It called for the addition of a "Human Life Amendment" to the U.S. Constitution that, in practice, would be the same as the proposed Personhood Amendment that Mississippi voters rejected by a 59-to-41 margin in 2011. Like the failed ballot initiative in Mississippi, such an amendment would give fetuses protections starting at the moment of conception.

Opponents of the Mississippi initiative warned that it would ban all abortions--even in cases of rape, incest, severe fetal deformity or in which a pregnancy imperiled a woman's life. They also pointed out that it could have outlawed in-vitro fertilization and certain forms of birth control.

The 2016 RNC platform that the SBA List credits Fitch with helping to craft also reiterated false claims that Planned Parenthood sells fetal parts for profit--disinformation that had already been discredited by the time Fitch was helping draft the document.