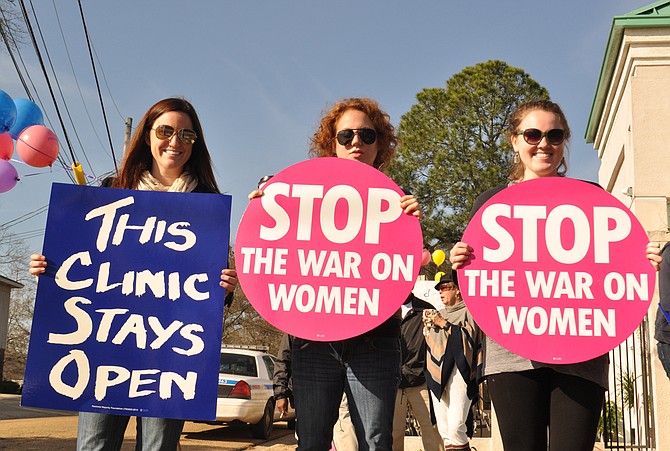 The Jackson Women’s Health Organization, the sole abortion clinic in Mississippi, received a permanent injunction in its case to prevent the 15-week abortion ban from going into effect. But, the State will likely appeal to higher courts. Trip Burns/File Photo Photo by Trip Burns/File Photo

JACKSON — For eight months, the nation's toughest abortion bill hung in limbo. The 2018 Mississippi Legislature sent the Gestational Age Act, called HB 1510, to Gov. Phil Bryant, who signed it into law on March 19. It prevented abortions after 15 weeks even in cases of rape or incest. The only listed exceptions were "severe fetal abnormality" or danger to the mother's health.

"I am committed to making Mississippi the safest place in America for an unborn child, and this bill will help us achieve that goal," Bryant tweeted with a video of him signing the bill in a room of cheering white lawmakers.

But the celebration didn't last long. With an abortion scheduled for the day after Bryant signed the law, the medical director of Jackson Women's Health Organization, colloquially known as The Pink House, and legally as the sole abortion provider in the entire Magnolia State, acted fast. The U.S. District Court in the Southern District of Mississippi granted Dr. Sacheen Carr-Ellis a temporary restraining order the same day the 15-week ban went into effect. Carr-Ellis brought the suit against Dr. Mary Currier, state health officer of the Mississippi Department of health and other state entities.

The final extension of that order was set to expire right around the Thanksgiving holiday. Judge Carlton Reeves provided a sharply worded ruling on Nov. 20 in his legal rebuke of the 15-week ban.

"The fact that men, myself included, are determining how women may choose to manage their reproductive health is a sad irony not lost on the Court," Reeves wrote in his Nov. 20 permanent injunction that says the ban would unequivocally infringe on the 14th Amendment's due-process rights of women.

However, Mississippi Attorney General Jim Hood, the only Democrat in statewide office, will likely appeal the case to the 5th U.S. Circuit Court of Appeals. Hood is also a 2019 gubernatorial candidate, as Bryant is term-limited.

"Because there is no controlling decision from our Fifth Circuit, it is our duty to appeal this ruling," Hood said in a statement to the Associated Press.

"I think this is part of his tactics," Derzis said in an interview. "A lot of these politicians that have these abortion issues, they never seem to have these issues until they're ready to run for a certain office, and all of a sudden this is a major issue because this decides what a citizen is going to vote for."

This 15-week effort, however, is really just about a matter of seven days— Derzis' organization does not perform abortions beyond 16 weeks after a woman's last menstrual period, often abbreviated "lmp."

While she sees the legislation as a waste of taxpayer money, Derzis also knows this is about the long game to stamp out Roe. V. Wade, which legalized abortion in 1973.

"I'm sure many states and especially Mississippi are trying whatever they can to get a case to the Supreme Court, no matter what it takes," Derzis told the Jackson Free Press.

Reproductive-justice advocates like Laurie Bertram Roberts, co-founder and executive director of the Mississippi Reproductive Freedom Fund, know that this case is about more than it presents itself to be.

"That's why that whole 15-week abortion ban bill was totally useless—it was all for show," Bertram Roberts said. "I'm telling you, it's pro-life fear. It really is political theater, I don't know how else to describe it. It makes me sick."

Roberts was thrilled when she read Reeves' ruling—it did not just look at the singular impact of abortion, but also weighed male decision-making power. Approximately 85 percent of the Mississippi Legislature was comprised of men in 2018. They handed their anti-abortion act to a male governor to sign.

Reeves not only pointed out how he, as a man who cannot get pregnant or seek abortion, can "only imagine the anxiety and turmoil a woman might experience when she decides where to terminate her pregnancy through abortion." He also lambasted legislators for their "history of disregarding the constitutional rights of citizens."

"Legislation like H.B. 1510 is closer to the old Mississippi—the Mississippi bent on controlling women and minorities," Reeves wrote. "The Mississippi that, just a few decades ago, barred women from serving on juries. ...The Mississippi that, in Fannie Lou Hamer's reporting, sterilized six out of 10 black women in Sunflower County at the local hospital—against their will."

Derzis agrees. "I think it serves no purpose," she said of the law. "It shows us where we are and the fact that we're constantly going backwards. As usual, you have health care mixed in with politics, and it shouldn't be."

Reeves accused the Mississippi Legislature of "pure gaslighting" for its professed interest in women's health because of silence on Medicaid expansion and infant and maternal mortality rates.

His decision to look at the State's impact on people's lives across the board stood out to Roberts.

"[I] read so many legal rulings a year—I'd never seen one quite worded with that kind of lens before, with that kid of intersectional and kind of a reproductive justice lens to it," she said.

Reeves said that his court asked on many occasions, "why are we here?" especially at a tremendous cost to taxpayers. He called out the real reason he was called to preside over this case.

"(T)he real reason we are here is simple," Reeves wrote. "The State chose to pass a law it knew was unconstitutional to endorse a decades-long campaign, fueled by national interest groups, to ask the Supreme Court to overturn Roe v. Wade."

"We're kind of basically baiting them, 'come on, fight us on turf that we have already set up and established,'" Denise Burke, Alliance Defending Freedom's legal counsel at the Evangelicals for Life conference January. The next step of the plan, Burke said, is to go for a complete abortion ban, except to save the mother's life.

The ADF did not respond to request for comment at press time.

Nationwide, the toughest ban is at 20 weeks, with states like Arkansas going for 12 weeks and others considering a heartbeat clause. Mississippi falls under the 20-week abortion law too, but, the de facto limit is 16 weeks because that is with the Pink House stops performing them.

However, even Reeves' ruling points out medical consensus that fetus viability begins at 23 to 24 weeks lmp, which is in keeping with the Mississippi Department of Health's own position that a fetus at 15 weeks has no chance of survival outside the womb, as Reeves points out.

MDH materials say fetuses at 22 weeks lmp have a small chance of surviving, and four in five infants born at 26 weeks lmp can survive with proper medical care.

Still, the effort will continue, with hopes to get it before the conservative-majority Supreme Court cemented by its newest addition, Brett Kavanaugh.

"With the recent changes in the membership of the Supreme Court, it may be that the State believes divine providence covered the Capitol when it passed this legislation," Reeves wrote. "Time will tell. If overturning Roe is the State's desired result, the State will have to seek that relief from a higher court. For now, the United States Supreme Court has spoken."

'They Want a Roe Case'

Despite Roberts' excitement with Reeves' vernacular, she continues to be a realist about the challenges her clientele faces when they try to get abortions. Her fund helps with not just funding the procedure, which can cost on average $600 totally out of pocket, but also with clearing other hurdles like transportation, childcare and securing a consultation and actual appointment after factoring the 24-hour wait period between each.

The Jackson Women's Health Organization amended its initial complaint to challenge existing abortion laws in the state. The court bifurcated the claims into two phases: Reeves ruled on Phase I with a permanent injunction against the 15-week ban, and Phase II encompasses the other grievances with abortion regulation, and it lives on in the court.

The Pink House has been the only abortion facility in the state since 2004, leaving 91 percent of women without an in-county abortion clinic. The results? "The number of abortions provided annually in Mississippi has declined by almost two-thirds from 1991 to 2014," Carr-Ellis' complaint reads. "Nationally, women obtain abortions at almost four times the rate of Mississippi women."

The Phase II lawsuit points out that 2004 is also when "Mississippi's efforts to eliminate access to abortion in the State through medically unnecessary and burdensome regulations began in earnest."

More broadly, the lawsuit seeks a declaratory judgment finding unconstitutional the several other existing laws and regulations around abortion, such as Targeted Regulation of Abortion Providers or "TRAP" licensing scheme that requires abortion clinics renew their licenses with a $3,000 annual fee, while other clinics that perform surgical and higher risk procedures either pay no fee or a one-time registration, the lawsuit reads. The Pink House is also required to file monthly reports about the demographic of its clients. Women also have to make two trips to the clinic: one as a consultation, and then the procedure after a mandatory 24-hour waiting period. Even if the 24-hour mandate stays in place, the suit advocates for the use of telemedicine for the initial consultation and counseling session, which is currently not allowed in abortion care.

The suit also wants a larger scope of who can perform abortions. Right now, only medically licensed physicians can perform abortions and the state-mandated counseling that occurs in the woman's first visit to the clinic. The Pink House only has a physician present in the clinic two to three days a week, limiting the option for care.

Roberts points out that helping women go out of state gets pricey, and although her small-but-mighty fund does what it can, those costs quickly add up and so does demand. Still, lawmakers press on to win the long game.

"They want a Roe case, that's why the states keep doing all of these laws—they want a Roe test case," she told the Jackson Free Press.

"See, in my heart, I am confused about where the outrage is at about 20 million African American children that have been aborted," Bryant said at a National Right to Life event with Hyde-Smith.

Roberts sees comments like Bryant's as a way for the governor to take the spotlight off of his own shortcomings in state with the most African Americans per capita and also the highest infant mortality rate.

"(Bryant) is not worried about none of these black women," Roberts said. "But yes, let's worry about potential humans that may have been aborted, not no living black babies that he doesn't want to pay for education or mental health care or expand Medicaid for."