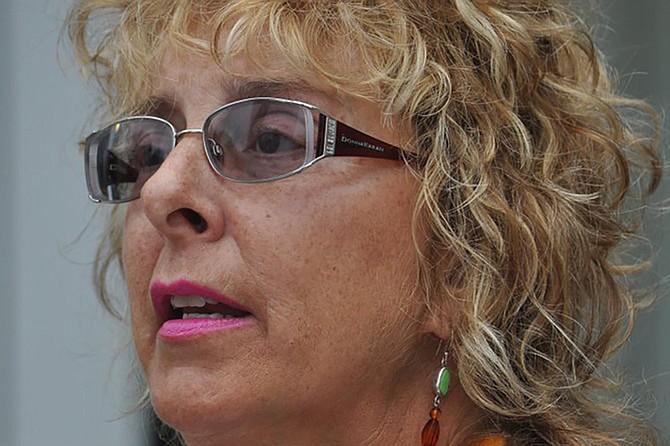 JACKSON — The State of Mississippi's Republican legislative leadership may have just decided to end all abortions after 15 weeks, but they used a template developed outside the state. The legislation is designed to "bait" abortion-rights proponents into a fight over ending abortion outright, the bill's architect group admits.

The Alliance Defending Freedom, a Christian conservative legal advocacy organization based in Scottsdale, Ariz., is behind the next wave of anti-abortion restrictions that they want to cause a legal battle that will eventually overturn the 1973 Roe v. Wade decision, ending abortion rights in the United States. Mississippi is the first state to pass ADF's model legislation of a 15-week ban. In 2016, the group also pushed for House Bill 1523 to try to limit same-sex marriage, defending the governor in federal appeals court after Attorney General Jim Hood declined.

Alliance counsel told a panel at the Evangelicals for Life conference in Washington, D.C., in January 2018 that its intention is to "reverse" Roe, as Peter Montgomery reported on Right Wing Watch, a progressive website that shared audio of that panel with the Jackson Free Press.

"We are developing legislation, getting expert witnesses together, so we can lay the groundwork for these cases so we can adequately defend these laws," Denise Burke, senior counsel at ADF, said at the conference.

ADF would work with a number of states to introduce 15-week ban legislation, she said.

"I can guarantee you that they will not be able to ignore a 15-week limitation, which is in essence limiting abortion to the first trimester. We're kind of basically baiting them, 'come on, fight us on turf that we have already set up and established.' I am happy to say the first 15-week limitation based on our model language was just introduced in the state of Mississippi this week," Burke said in January. 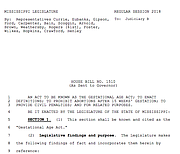 "We have very carefully targeted states based on where we think the courts are the best, where we think the governors, the AGs and the legislatures are going to do the best job at defending these laws," Burke told the Evangelicals for Life panel crowd in January.

"... Once we get these first-trimester limitations in place, we're going to go for a complete ban on abortion, except to save the lives of the mother," Burke added.

The Alliance Defending Freedom did not provide anyone for the Jackson Free Press to interview, emailing a statement instead.

"Alliance Defending Freedom is one of America's leading constitutional legal organizations," Kevin Theriot, the vice president of the Center for Life, said.

"From time to time, lawmakers ask ADF attorneys to review the constitutionality of proposed legislation. ADF supports states' important and legitimate efforts to protect the health and safety of women and children."

Putting Up a Fight

Abortion-rights activists and legal scholars say the 15-week ban is unconstitutional, citing others in Arkansas and North Dakota that both tried to ban abortion at 12 and six weeks, respectively. The Center for Reproductive Rights challenged both those bans in federal court and won. States with 20- and 22-week abortion bans have lost in court, while other bans are stalled in state court systems.

The Center for Reproductive Rights, along with local counsel Rob McDuff, stand ready to challenge House Bill 1510, should it become law.

"We're going to file a challenge to it, as soon as the bill is signed, in federal court," McDuff told the Jackson Free Press.

They will sue the State on behalf of Mississippi's only abortion clinic, the Jackson Women's Health Organization, located in Fondren. Attorney General Jim Hood will have an obligation to defend the state. In a press statement last week, the attorney general said, "We know that bans below 20 weeks been struck down." However, this week when the Jackson Free Press asked for clarification on whether or not he would defend the law, he said he would defend it.

"There's not a consensus of the courts that a 15-week ban is unconstitutional," Hood said in an emailed statement to the Jackson Free Press. "Because of that, I have a duty as attorney general to defend the constitutionality of this statute enacted by the Legislature."

Diane Derzis, who runs the abortion clinic, is used to putting up a fight. The clinic has had to swerve all kinds of anti-abortion legislation, including an expensive admitting privileges bill in 2012 and, in recent years, a "partial-birth" abortion and 20-week ban.

In Mississippi, a woman must make two appointments at JWHO, due to mandatory waiting periods in state law. Derzis says lawmakers' restrictions on abortions—the majority of which nationally occur in the first trimester—create the need for second trimester procedures.

"When you keep putting barricades in front of a woman who is pregnant and is bound to terminate that pregnancy, she's going to do whatever it takes," Derzis said.

Only a few years ago, Mississippi was one of two states in the country that had one abortion clinic. Today, due to more states tightening abortion regulations, there are more, Derzis said.

"This is the first 15-week ban. They've done the heartbeat (ban), the 20-week ban, you know; they are throwing everything they can out there with the hope that Trump appoints another Supreme Court justice, and we lose Roe—that's it," Derzis said. "They have tactics, and they're pretty good at their tactics at the expense of the people who live in Mississippi who have to pay to litigate."

Republicans who pushed the 15-week ban through the Legislature maintain that 15 weeks is enough time for a woman to decide whether or not she is going to seek out abortion services.

"If a woman has not decided to have an abortion by that point in time (at 15 weeks), you know, at that point the state has these interests to protect, her health and the child's health, that's what the bill does," Rep. Andy Gipson, R-Braxton, told the House of Representatives last week.

Supporters of the legislation also argued that the bill is constitutional.

The clinic does not offer abortions past 16 weeks. Thus, McDuff said there was no reason to challenge the 20-week ban because it has no practical impact in the state. Current state law leaves "probable gestational age up to the judgment of the physician.

During debate, Republicans kept repeating that 200 lives would be saved with the bill each year, but Mississippi Department of Health numbers do not support that claim. In 2016, the most recent year data are available, only 27 abortions occurred in the state at 16 weeks and 184 abortions were performed at 14-15 weeks. The Department of Health records show 2,569 abortions were performed in the state in 2016, the vast majority of which occurred before 12 weeks of pregnancy. More than 4,000 Mississippi residents received abortions, however, implying some are leaving the state for services.

Rape and incest are not exceptions to the state's current 20-week abortion ban, nor are those exceptions among the results ADF ultimately wants. The State carves out an exception for the physical health of the mother in a medical emergency and in the case of severe fetal abnormality. Sen. Derrick Simmons, D-Greenville, offered an amendment to HB 1510 to add cases of rape and incest as exceptions to the new 15-week ban, but it failed.

"I personally believe that those decisions should be made between those women, their families and their doctors. But because we have a legislative body trying to make those decisions ... then I think that we certainly should use this vehicle to include those situations where an unfortunate occurrence happened regarding rape or incest," Simmons said while offering the amendment. "I think we'll be supporting women in Mississippi by doing this."

Fillingane opposed the amendment, offering little in defense. He said exceptions would complicate the bill.

"This amendment is obviously being offered to try to muddy the waters. ... It doesn't need to be in the 15-week bill because, again, you can get an abortion for any reason through the 15th week," he said.

Simmons' amendment failed along partisan lines, with all Senate Republicans voting or abstaining against the measure to make an exception for rape and incest.

The House debated a exceptions too. Rep. Gipson said cases of rape and incest "are normally and customarily addressed earlier than 15 weeks." Democrats pushed back.

"I'm sure ... there are women who have missed their cycle and could have been raped and will fall into this category. So how does this bill address that?" Rep. Chris Bell, D-Jackson, asked Gipson last week.

"When there is a rape, there is normally a rape kit that can be performed to find out the evidence of that rape, and that issue is going to be dealt with earlier than three or four months," Gipson said.

"... So what about instances where they don't report the rape?" Bell countered.

"Three months and three weeks is 15 weeks. That's a long time, and those situations are going to be handled a lot earlier than that 15-week mark," Gipson maintained.

The House sent the bill to the governor last week, who is expected to sign it, codifying it immediately.